Antisemitism and Anti-Zionism in modern Ireland

A very interesting and rather shocking article appeared in The Commentator last week dealing with antisemitism in modern Ireland: “The perfect liberal state: ‘Progressive’, European and Jew-hating” by Bernard McCabe, a London-based Irish writer.

The article addresses the phenomenon of antisemitism in Ireland dating from the early 1900s until today, encompassing all the varying forms of this moral virus.

In 1904, Limerick’s Jewish community was devastated by an infamous pogrom that saw them largely driven from the city. The words that catalysed this pogrom come as no surprise to anyone: the Jews, said Father John Creagh (who kick-started the activity), are usurers, freemasons, Christ-killers.

It’s hardly even worth saying that young people are more anti-Israel. Anti-Israel activity on British campuses has already been well documented, but at least in the United Kingdom we have some sort of history of (at least marginal) support for Israel. In the past, however, as in the present, Ireland has been vehemently anti-Israel politically and culturally. Indeed, it is the only issue other than appetite for more accession of sovereignty to the EU that truly unites the vast majority of Irish politicians. Ireland, for example, was the last EU country to grant permission for an Israeli embassy – in 1993.

Where does all this hatred come from? Are my compatriots Nazi sympathisers? Has Ireland been taken over by a radical Islam that makes Ian Paisley look as harmless as Christine Bleakley? No, the truth is that anti-Semitism in Ireland has a long history.

In the old days, it came from (as it did across Europe) an extreme Catholicism. Latterly, anti-Semitism has found its provenance from Ireland’s consistently pro-Palestinian position. Ireland was of course for 800 years oppressed by the evil hand of British rule (that brought us roads, education, some form of civilisation), and the fight to ‘free’ her could take as many lives as possible.

As slaves to history, and in the great Irish tradition of storytelling, they (or I should say, we) look to the Middle East and localize that situation and apply the same logic. The Jews are just like the Brits, you see. Forget the actual Holocaust, they imply, the real Holocaust is actually carried out by the Israelis.

Mr. McCabe nails the entire issue with this following sentence:

Fr Mac Gréil’s study is of course shocking. But is it really surprising? Judaeophobia is the hatred en vogue of the bien-pensants. 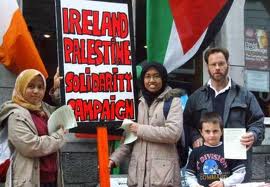 In a similar fashion, the Irish journalist Kevin Myers writes about modern anti-Israel hatred, and like Bernard McCabe, wonders where the hatred comes from. His article appears in the Irish Independent, entitled “How can do-gooders possibly think that Gaza is the primary centre of injustice in Middle East?”.

What is it about Israel that prompts such a widespread departure from common sense, reason and moral reality? As another insane flotilla prepares to butt across the Mediterranean bringing “aid” to the “beleaguered” people of Gaza, in its midst travelling the MV Saoirse, does it never occur to all the hysterical anti-Israeli activists in Ireland that this is like worrying about the steaks being burnt on the barbecue, as a forest fire sweeps towards your back garden?

I took part in a discussion about the Middle East last weekend in the Dalkey Books Festival. It was surreal. Not merely was I the only pro-Israeli person in the panel of four, but the chairwoman of the session, Olivia O’Leary, also felt obliged to throw in her three-ha’pence worth.

Israel — and its sole defender on the panel (is mise) — were then roundly attacked by members of the audience. But what was most striking about the audience’s contributions was the raw emotion: they seemed to loathe Israel.

But how can anyone possibly think that Gaza is the primary centre of injustice in the Middle East? According to Mathilde Redmatn, deputy director of the International Red Cross in Gaza, there is in fact no humanitarian crisis there at all. But by God, there is one in Syria, where possibly thousands have died in the past month.

However, I notice that none of the Irish do-gooders are sending an aid-ship to Latakia. Why? Is it because they know that the Syrians do not deal with dissenting vessels by lads with truncheons abseiling down from helicopters, but with belt-fed machine guns, right from the start?

…really, by any decent measure, it is simply not possible to gaze upon the entire region, reaching from Casablanca to Yemen, and then to point indignantly and say: “Ah yes, Gaza: that’s where the one great injustice lies.”

Now another convoy is under way, and again with an utterly disingenuous plan to bring “assistance” to the “beleaguered Gazans”, some of who, funnily enough, can now cross into Egypt any time they like, and buy their explosives and their Kalashnikovs in the local arms-bazaar.

And as for human-rights abuses: why, nothing that Israel has done in the 63 years of its existence can possibly compare with the mass-murders of Fatah members by Hamas firing-squads over the past five years.

The colossal western intellectual dissonance between evidence and perception on the subject of Israel at this point in history can perhaps only be explained by anthropologists.

This dissonance is perhaps at its most acute in Ireland, where no empirical proof seems capable of changing people’s minds. Israel, just about the only country in the entire region where Arabs are not rising up against their rulers, is also the only country that the Irish chattering classes unite in condemning. Rather pathetic, really.

I applaud both Bernard McCabe’s and Kevin Myers’ refreshingly honest assessments of their country’s attitude towards Jews and Israel. My only caveat would be that Kevin Myers seems to think that unreasoning anti-Israel hatred is the major province of the Irish, whereas I would claim that it is an equal-opportunity hatred, shared in and relished by every extreme-left, radical chic pseudo-socialist organization in the world, regardless of nationality.

65 Responses to Antisemitism and Anti-Zionism in modern Ireland