Posted on 4 September 2011 by anneinpt 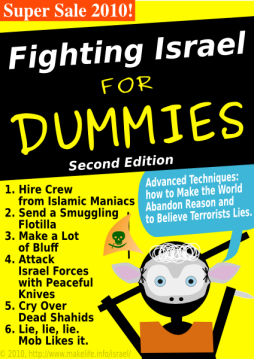 In the wake of the Palmer report which largely exonerated Israel during the Mavi Marmara flotilla fiasco, Turkey has erupted in a giant temper tantrum and in a fit of pique expelled the Israeli Ambassador.

The Turks didn’t quite get the panicked response from Israel that they might have hoped for:

Jerusalem sources were unfazed by the move, saying that Israel’s military agreements with Turkey had previously been suspended – by Israel. “Military trade with Turkey was suspended a while ago… we didn’t want to risk any weapons made in Israel falling into the wrong hands,” a diplomatic source said, speaking on condition of anonymity.

Turkish Foreign Minister Ahmet Davutoglu continued to ramp up the rhetoric by declaring that Turkey will take Israel’s blockade of Gaza to the International Court of Justice (ICJ) in the Hague.  Davutoglu sneeringly dismissed the results of the Palmer Report, even though the report was commissioned by the Secretary-General of the UN himself, presumably because the results didn’t fit in with his expectations of the usual UN Israel-bashing.

In an interview with Turkey’s state-run TRT television, Davutoglu dismissed a UN report into the raid that said Israel’s naval blockade of Gaza was a legal security measure. Davutoglu said the report – prepared by former New Zealand Prime Minister Geoffrey Palmer, and former Colombian President Alvaro Uribe, and presented to UN Secretary General Ban Ki-moon – was not endorsed by the United Nations and was therefore not binding.

The minister said the UN report released Friday contradicted an earlier report on the Gaza flotilla incident which found that Israeli forces violated international law when they raided the flotilla. That report was prepared in September by three human rights experts appointed by the UN’s top human rights body.

Since we all know how the UN’s human “rights” body regards Israel, I’m sure no one is surprised that they issued a condemnation of Israel at the time.

“If Israel persists with its current position, the Arab spring will give rise to a strong Israel opposition as well as the debate on the authoritarian regimes,” he said.

Riiight. As if that isn’t happening already.  Ynet continues:

Meanwhile, a Turkish source told the Hurriyet newspaper that “the eastern Mediterranean will no longer be a place where Israeli naval forces can freely exercise their ‘bullying’ practices against civilian vessels.”

The newspaper quoted Turkish diplomats as saying that the Turkish navy will boost its activity in the eastern Mediterranean and hold reconnaissance in international waters. “A more aggressive strategy will be pursued. Israel will no longer be able to exercise its bullying practices freely,” one of the diplomats said.

The sources said that Turkish navy vessels are slated to escort aid ships to Gaza in the area between Cyprus and Israel, adding that one can expect more Turkish warships in the region. The warships are also slated to operate in the area where gas reserves were found by Cyprus. Ankara claims the area belongs to Turkey.

The paper also reported that Prime Minister Recep Tayyip Erdogan plans to visit the Gaza Strip in the coming weeks.

Well, I’m sure that’s all going to work out just peachy and lead to the breakout of peace all over the Middle East… Not.

This cooling of relations is no surprise to Israeli policymakers and does not spring from either the war with Hamas in the Gaza Strip (2008-2009) or the Gaza Flotilla. (Similarly, when an Islamist regime took power in Iran no specific problem was needed to turn that country from a friend to an enemy of Israel and there was nothing Israel could do to prevent that turnaround.)

Before either event happened, Israeli officials knew that the period of close cooperation with Turkey was ending because the Turkish government was an Islamist regime hostile to Israel and to Jews generally. Now we have a Wikileaks document in which the then Israeli ambassador tells an American diplomat that the government leaders passionately loathe Israel.

It seems to be a secret mainly to the White House and most of the Western mass media that Turkey is being turned into a police state, that the regime is taking over institution after institution, and has now broken the armed forces–the last barrier to its long-term hegemony and the fundamental transformation of the country from secular republic to semi-Islamist semi-dictatorship (albeit a dictatorship capable of winning more votes than any other party).

Meanwhile, you just know that the Turks are onto a bad thing when not only the New York Times, but even the Guardian, express doubts about the wisdom of Turkey’s actions and question their motives.

We don’t blame Israel for wondering if Turkey is keeping this conflict going to burnish its standing in the Arab world. Turkey is risking a lot, including billions in trade with Israel and its reputation as a responsible international player. Israel certainly doesn’t need to be any more isolated than it is.

After Davutoglu’s tough stand, some observers will say Ankara is indulging in a private feud, complicating its relations with a pro-Israel Washington at the very moment when it should be helping to co-ordinate a response to the events of the Arab spring. On the flip side Ankara may be able to cultivate greater sympathy with the Islamist factions now vying for power in north Africa.