Posted on 3 November 2011 by anneinpt

The captain of the flotilla

For a minute there, I thought Israel was sending an aid flotilla to Turkey to help with the earthquake victims. But no. In yet another stupid stunt worthy of Bugs Bunny and his cartoon cohorts,  trying to discredit Israel rather than help the Palestinians, two boatloads of flotilla fools have set sail from Turkey to Gaza to try and break Israel’s UN-declared legal blockade of Gaza.

Activists in New York announced Wednesday that two ships carrying 27 activists from five states, including the US, are currently sailing through international waters in the Mediterranean Sea en route to Gaza. The vessels departed from Turkey.

“The Canadian ship Tahrir and Irish ship Saoirse have successfully reached international waters, initiating ‘Freedom Wave to Gaza’. The boats have embarked from Turkey and are on the Mediterranean Sea,” the organisers from Ustogaza group said in an e-mailed statement.

The activists said they did not announce the step in advance in order to prevent US and Israeli pressure on countries where their ships docked. The Center for Constitutional Rights (CCR) called for an end to the blockade on Gaza and said it supported flotilla efforts to end the isolation of Palestinians in the Strip.

The organization, which provides legal aid to terror suspects held in Guantanamo, criticized US Congress for supporting the blockade.

The floptivists admit they will be bringing only “symbolic cargo“.

Activists said that the boats were carrying “symbolic cargo,” consisting of $30,000 in medicines as well as activists “committed to nonviolent defense of the flotilla and Palestinian human rights.”

What a waste of money that could have gone to the alleged victims of the blockade. How does “symbolic cargo” square with the allegedly dire straits that the Gaza faces?   If these floptivists really want to help, and they have gone as far as hiring two boats plus organizing dozens of “sailors” why don’t they at least load up their boats with much-needed goods like food, medicines, building materials… 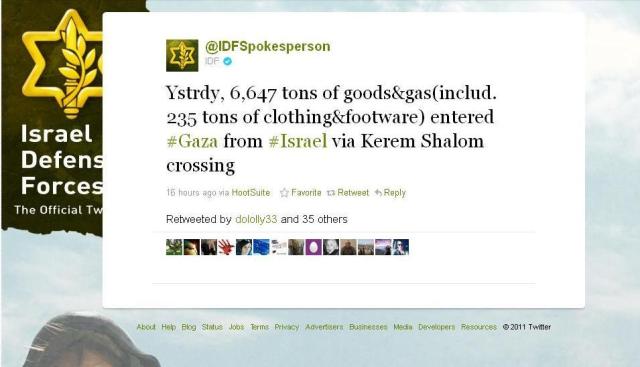 IDF allows hundreds of tons of goods into Gaza

This entry was posted in Boycotts and BDS and tagged BDS, flotilla, follies, Gaza, Turkey. Bookmark the permalink.