So we had the engagement party last night and it was fantastic! We held it in a local shul hall and the caterers did a simply brilliant job, both with the sumptuous food and with the table decorations, including candles, shiny coloured stones and amazing flower arrangements.  And they gave us a discount at the end of the evening! (I have their number if anyone is interested).

Of course, this being a family simcha, there had to be speeches. And they went on. And on. And on… :-). Our Rabbi spoke for the shortest time, just a few minutes, our new son-in-law’s Rabbi spoke a bit longer but very nicely, son-in-law himself (now renamed Dimona Dude as Aridog [um, not quite suitable under the circumstances] named him in his comment) spoke very sweetly. And then his cousin started. And didn’t want to stop. Then his father… oy. When his Rabbi signalled to the father to wind it down, I remarked that if a Rabbi tells you your speech is too long, it must be of epic proportions! 😀

In the traditional way I broke a plate with our son-in-law’s aunt (his mother sadly passed away a few years ago) as a remembrance of the destruction of Jerusalem.

After some more fressing (Yiddish slang for eating) we then we got down to the best part of the evening – the hinna. The Dimona branch of the family had taken our daughter on a shopping spree earlier in the week – she thought all her birthdays had come at once! She received clothes, jewellery, cosmetics, and was measured up for Moroccan-style robes. Dimona Dude was similarly measured up, and last night they disappeared to change into their exotic outfits, and our daughter was adorned with all her finery and jewellery.

The young couple started out the evening like this:

The next part was the actual hinna ceremony. A bowl of the stuff was ceremonially presented, complete with candles and sugar almonds, and to be honest, being a good Ashkenazi, I thought it was chocolate cake! Next, the henna is smeared on everyone’s hands and a ribbon tied on top of the stuff so as not to dirty your clothes.

Bowl of hinna (not chocolate cake)

And then the dancing began, complete with plates of Moroccan cakes and sweets (prepared by a Dimona neighbor and close friend)  held aloft and even balanced on our heads.

Even my über-yekkish family got in on the act with the dancing and donning tarboushes. I’m sure such frivolity was never heard of in Frankfurt-am-Main! 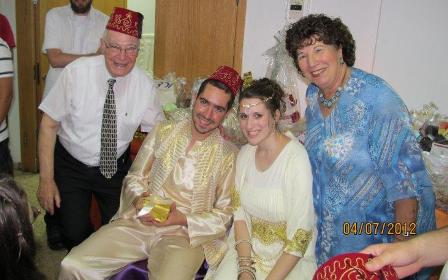 Proud Grandparents and a tarboush

The younger generation wouldn’t be left out either: 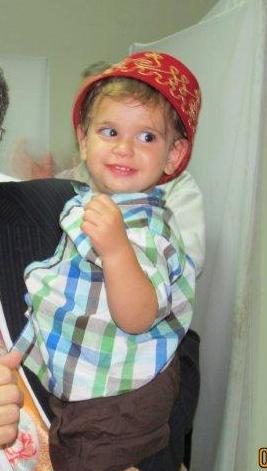 My brother quipped, “a small earth tremor was registered this evening in Cheshunt*. It was caused by our grandparents turning over in their graves”.  LOL!

*Cheshunt is one of the Orthodox Jewish cemeteries in the London area.

Seriously, I’m sure our grandparents z”l would have thoroughly approved both of the match and the celebrations last night. I am sure they were watching from Heaven with great nachas.

Roll on the wedding!

This entry was posted in Family, Slice of Israeli life and tagged engagement, family, henna, hinna, Moroccan. Bookmark the permalink.

13 Responses to Engagement and Hinna Party