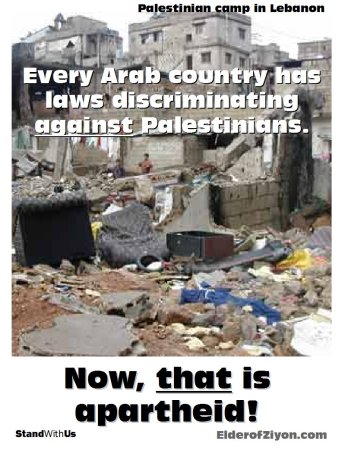 via Elder of Ziyon

At the very end of my post about last week’s rocket barrage on the south I made a sarcastic passing reference to the fact that the foreign media completely ignored the terrorists’ attack on Israeli territory while concentrating on an outrageous article by Gideon Levy, one of Haaretz’s most outspoken and controversial reporters who almost always takes an anti-Israel line, and who penned a screed accusing Israelis of supporting apartheid. Of course his article was jumped upon with glee by all those who hate Israel, and remarked upon “more in sorrow than anger” by those who claim to support Israel, and now Israel’s supporters have to work double time to debunk his outrageous claim.

Ben Dror Yemini, a senior journalist with the Hebrew daily Maariv and who specialises in refuting anti-Israel lies, has written (in the Times of Israel) a masterpiece of a rebuttal of Levy’s disgraceful article.

An important side-note before we begin: a small victory has already been achieved since Haaretz changed the title of Levy’s article from “Most Israelis support an apartheid regime in Israel” to the more accurate yet nevertheless slanted headline: “Survey: Most Israeli Jews wouldn’t give Palestinians vote if West Bank was annexed”.

CLARIFICATION: The original headline for this piece, ‘Most Israelis support an apartheid regime in Israel,’ did not accurately reflect the findings of the Dialog poll. The question to which most respondents answered in the negative did not relate to the current situation, but to a hypothetical situation in the future: ‘If Israel annexes territories in Judea and Samaria, should 2.5 million…

‘Survey: Most Israeli Jews would support apartheid regime,” the headline in Haaretz screamed earlier this week. If that were true, it indeed would have been a worrying development. But the information below will demonstrate that the article contains some of the most blatant anti-Israel lies published in recent years. And Gideon Levy, the one and only – who is read more in English than in Hebrew — was awarded the task of explaining the survey to the whole wide world.

The result? Israel is apparently not merely on the way to becoming South Africa. It has already turned into South Africa. The lie has been making waves the world over, spreading like wildfire. The goal has been achieved.

It’s not easy to chase down a lie that has already gained traction worldwide. But it seems there is no escaping the attempt, at least. So we’ll bring the facts — just the facts — and let them speak for themselves. Hopefully, someone is listening.

Gideon Levy’s name graces the byline of the main article, which included the survey results. The same Gideon Levy also wrote the accompanying commentary article. But Levy was probably so elated, that he did not even notice that he implicates himself in lies.

According to the survey, 53 percent of Israelis are not opposed to having an Arab neighbor. That much is clear. But when Gideon Levy passes from reporting to overt incitement masquerading as “interpretation,” he writes that “the majority doesn’t want… Arab neighbors.” Could it be that the second Gideon Levy didn’t properly read what was written by the first Gideon Levy?

Moving on: According to the survey, 33% of Israelis support revoking the voting rights of Israeli Arabs. That’s a grave figure in and of itself. But when it comes to the “interpretation,” Levy writes that “the majority doesn’t want Arabs to vote for the Knesset.” Again, Levy the interpreter seems not to have read Levy the reporter. Is he capable of formulating a sentence that includes only the truth? And where in the hell is his editor? Was there not a single editor who could properly parse the results of the survey?

But then again, the lies were designed to lend Levy the justification for his political conclusion; namely, that the possibility of a Jewish and democratic state of Israel has expired. In the past, I wrote that Gideon Levy is “Baron of the Falsehood Industry.” Levy insists on providing more and more evidence to this effect.

According to the survey, 69% of Israelis oppose the granting of voting rights to Palestinian Arabs if the territories are annexed.

The real reason that most Israelis oppose the annexation of the territories, however, is, most likely, that they would like to avoid a bi-national state or the risk of an apartheid one. But Haaretz pulled off an extraordinary feat of deductive logic, stating that most Israelis support apartheid. It’s like a survey indicating that most Israelis are opposed to violence — but that if they were to be attacked by a mugger, they would react violently – breeding a report with the title “Most Israelis support violence.” This is the story of the Haaretz headline. It’s based on a purely hypothetical, or, more precisely, manipulative situation.

Meanwhile, CAMERA has published the full survey, and it turns out that the famed reporter and commentator may have committed full-fledged fraud. For instance, on the issue of separate roads for Israelis in the West Bank, 50% of respondents answered that having separate roads is “not a good situation but there is no alternative,” while another 17% said it was just “not good.” What appears in Levy’s version? Only “no alternative.” The “not good” response was simply omitted. And there are other examples there.

Baron of the Falsehood Industry indeed.

A survey conducted by the “SIKUY” association, which no one can accuse of harboring any right-wing inclinations, found that “60% of [Israeli] Jews believe that promoting the equality of Arab citizens is in the interest of the state.” Sixty percent! In addition, the survey found that “53% of the Jewish population in Israel is bothered by the inequality of Israeli Arabs,” and that “40% of Jews are willing to pay a personal price in order to achieve the goal of civil equality in Israel.” Indeed, a personal price for equality, for a sense of partnership.

This survey was more comprehensive and thorough than the survey ordered by a political organization that probably marked its goal on advance.

A survey conducted by the Jerusalem Institute for Israel Studies just last year found that 48% of the Jews in Israel support (vs. 43% who oppose) a “package deal,” including a mobilization of citizenry and government, to improve the situation of the Israeli Arabs within the framework of “inclusive citizenship.” But this survey received no front-page headlines.

The survey was much more serious and far more thoughtful, and its academic staff comprised mostly leftists. Not the kind of leftists that characterize Haaretz, but the kind that want to investigate, to know, to propose a framework to improve the current situation, which indeed merits improvement.

The Arabs of Israel, according to all sane and sensible measures, enjoy greater civil rights — far greater — than the population of any other country in the Middle East.

Just recently, a leading Arab website, Arab News, published an article by Abdoltif Al-Milham showing that reality. This important article, which attempted, among other things, to counter anti-Zionist and anti-Semitic falsehoods about Israel as an apartheid state, also received prominent billing in the second-largest Arab channel, Al Arabiya. But not to worry: Even if the world occasionally receives glimmers of the truth, Haaretz takes care to return the lies to center-stage. It will readily refute the reality with the help of a dubious survey that the paper fell on like a trophy.

The word “apartheid” has a meaning in international law. Its definition appears in Section 7 of the Statue of the International Criminal Court:

Murder; extermination; enslavement; deportation or forcible transfer of population; imprisonment or other severe deprivation of physical liberty in violation of fundamental rules of international law; torture; rape; sexual slavery; enforced prostitution; forced pregnancy; enforced sterilization, or any other form of sexual violence of comparable gravity; persecution against any identifiable group or collectivity on political, racial, national, ethnic, cultural, religious, gender…; enforced disappearance of persons…. in the context of an institutionalized regime of systematic oppression and domination by one racial group over any other racial group or groups and committed with the intention of maintaining that regime.

Such crimes were never carried out in Israel, and Gideon Levy knows it. In a country where Arabs serve as doctors, professors, judges — in a country where they vote and are elected to the legislature – there is no apartheid. There are instances of discrimination, and one should fight against these, as in any other democratic country. Most people who answered the survey questions are not familiar with the definition of apartheid. Gideon Levy and Haaretz are supposed to know that. But they chose to cast Israel as an apartheid state.

These are the facts. You can add more surveys and other studies. Indeed, there are manifestations of discrimination; there are expressions of racism – as in all Western countries. And that’s a shame. If Haaretz had published true findings, it wouldn’t be worth a single word of criticism.

But Haaretz published this week one of the biggest manipulations in the history of incitement against Israel.

Haaretz is not representative of the left. Because there are two lefts: There’s a left that seeks peace, human rights and a democratic Jewish state; and there’s a left that embraces demonization. Haaretz occupies a place of honor in this second left. Out of 10 studies on Jewish attitudes toward Arab rights, Haaretz selected the most negligible, the most outlandish, and made a headline out of it. And as if that were not enough, Haaretz also distorted the results.

Today, we can look back and see how the image of the demonic Jew came into being: it took a systematic campaign of lies and brainwashing. One day the minister of history will deal with the same question: How was the image of a demonic Israel created? But there’s no need to wait for the far future. What was once done by the anti-Semitic right to the Jews is now being done by the anti-Zionist left to Israel. The difference between them, if it was not clear, is fading away.

Haaretz will of course argue that Levy’s is a legitimate “analysis.” The real question is whether such propaganda can be termed “journalism.”

Read it all and spread the word.

3 Responses to Haaretz, Gideon Levy, and the Israel apartheid canard