Here we are again, time for another Good News Friday post.

I suppose that we could count getting a new government as good news, but I will leave that for posterity. In the meantime, our first item for today is the news that the unsung hero of Parkinson’s treatments will be receiving an award for his research:

Over 100,000 people around the world who suffer from Parkinson’s disease have been treated with deep brain stimulation techniques, which studies have shown to be among the most effective treatments for the ailment. One of the silent crusaders in DBS research is Professor Hagai Berman of Hebrew University, whose breakthrough studies have proved that the technique could allay Parkinson’s symptoms in many patients.

Now, thanks to the Rappaport Family Foundation, Professor Bergman will receive the recognition he is due. Next week, he will be one of two Israeli researchers awarded the Rappaport Prize for Excellence in Biomedical Research.

In 1990, Professor Bergman conducted a major study that showed DBS to be an effective treatment against one way scientists believe Parkinson’s is contracted. In 1983, a neurotoxin called MPTP was accidentally found to cause a rapid onset of Parkinson’s, giving scientists one of their first windows into figuring out how to treat the disease. The study by Bergman and several colleagues showed that manipulation of a section of the brain called the subthalamic nucleus could help alleviate many of the symptoms of MPTP-induced Parkinson’s. Further studies showed that the treatment was effective in patients who suffered from regular Parkinson’s, without the side effects of LID.

While not offering a cure, DBS, as the treatment based on Bergman’s work came to be called, can help patients live a more normal life. DBS, which involves psychiatric and neurological treatment based on electric stimulation, is today one of the main treatment methods for the motor symptoms of Parkinson’s disease and other motor disorders connected to Parkinson’s such as tremors, muscle stiffness and movement difficulties.

This revolutionary treatment will bring relief to millions of people worldwide. Mazal tov to Prof. Berman and kol hakavod to the Rappaport Foundation for recognizing Prof. Berman’s contribution.

The next item for today also deals with treatment of disease, but this time it’s about plant diseases. An Israeli company, Morflora, has developed a “vaccine” to protect plants from disease without the use of controversial genetic modification (GM):

Modifying plants’ genes to yield larger fruits and vegetables or tweaking certain genes to make them more resistant is a controversial issue. While some say it tampers with nature and is potentially harmful, others say it’s the only way to feed the world’s growing population. The Israeli company Morflora claims its solution is a hybrid one, as its novel method “vaccinates” plants and seeds against a wide variety of diseases and introduces new traits, but without leading to genetic modifications or passing on the new traits to future generations.

TraitUp also has immediate results. “Until today, introduction of genes to a given plant, by breeders relied on classical methods which can take up anytime between three to seven years to develop and express the desired trait in particular plant species, or by genetic engineering which is time and capital consuming,” Poleg says.

He adds: “The TraitUP components and the introduced gene(s) do not integrate into the plant’s genome and as of current knowledge are not heritable. Expression or silencing of genes (meaning we turn a gene ‘on’ or ‘off’, without changing it) occurs within a few days in all herbaceous plants tested, including tomatoes and wheat, and in up to a month as tested in woody trees.”

Poleg describes the process as a sort-of vaccine for plants: “when you get a flu shot, you’re getting some genetic material that helps you fight off the specific disease, you’re not completely resistant, and you can still pass it on to your children. It’s the same with our technology.”

The “vaccination” helps protect plants from viruses and fungi, both of which are often responsible for huge losses in crop production and quality, and also works to enhance plant genes to produce larger yields.

The implications of this discovery are enormous, and hugely beneficial to farmers and growers worldwide. Kol hakavod to Morflora for their initiative and innovation. Once again, Israeli scientists working to benefit mankind. 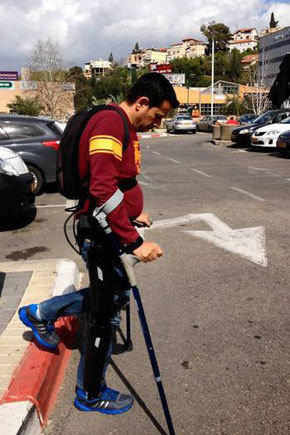 My last item for today is about an Israeli paraplegic who has regained the ability to walk with the help of the Israeli ReWalk device, and was intending to participate in today’s Tel Aviv marathon:

The bullet that tore through Israeli paratrooper Radi Kaiuf’s spine during a 1988 Lebanon firefight shattered his dreams of becoming a dentist. Doctors said he’d never again walk or have a normal life.

But Kaiuf, now 46, had other ideas. He decided he would not allow the injury to defeat or define him.

Over the years he married and had four children. He learned to drive with a specially equipped car, exercised with a hand-powered bicycle and even went skiing in a wheelchair.

On Friday, Kaiuf, a Druze Arab born in the village of Osfiye, will take another big step — actually about 15,000 of them.

Using a groundbreaking Israeli medical device that enables those paralyzed from the waist down to walk with the aid of robotic leg braces, Kaiuf hopes to become the first paraplegic to finish a competitive race in real time without a wheelchair.

He will compete in the 10-kilometer (6.2-mile) race associated with the Tel Aviv marathon, a challenge that will probably take five hours and require at least one battery change for the 55-pound exoskeleton machine. On Tuesday, the full marathon was rescheduled for March 22 because of an expected heat wave, but the shorter race will go on as planned.

Though a British woman last year used the same bionic device to complete the entire London marathon over a 16-day period, Friday’s race will mark the longest attempt yet of continual use of the invention, called ReWalk.

More than 100 ReWalk devices are being tested in hospitals in Europe and the U.S., including Downey’s Rancho Los Amigos National Rehabilitation Center. The ReWalk was featured in a 2010 episode of “Glee,” in which a partially paralyzed character uses it to walk.

The idea for the device came to Israeli computer scientist Amit Goffer after he became a quadriplegic in a 1997 car accident. He can’t use the device because it currently is suitable only for lower-body paralysis, but he’s working on a model for himself.

Goffer and Kaiuf met at a rehabilitation hospital, and the inventor — impressed by Kaiuf’s energy and adventurism — asked the ex-soldier to try it.

At first Kaiuf needed extensive training to learn how to walk, balance himself, navigate stairs, sit down and stand up again.

Seven years later, he’s such an expert that he’s pushing designers to make the product faster or sturdy enough to walk on a sandy beach. He’s traveled around the world as a company spokesman.

The ultimate dream for the former paratrooper is to jump out of an airplane again with the device, an idea that causes company officials to laugh nervously.

When he told his doctors about his plans for the race, they advised against it, saying the physical exertion would be too great. Kaiuf smiled and continued his training.

“It’s another way to test my limits,” he said. “It’s like jumping out of an airplane. Once you jump, there’s no turning back.”

Wow! What an incredibly courageous man! Kol hakavod to Radi Kaiuf and I wish him luck in the marathon. It’s terribly hot today (in the mid-30s Celsius) so I hope he has taken care. And huge kudos too to the inventor of the ReWalk device, Amit Goffer, who did not let his own physical disabilities deter him from trying to improve the lot of others. I sincerely hope he will be able to invent a device to help himself walk too.

May all these stories inspire us to try and improve ourselves and the world.