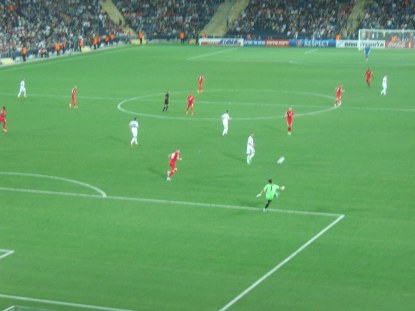 My first item will be a favourite for the sports fans amongst you. The European under-21 Football Championship was just successfully held in Israel despite vigorous campaigning by the BDS brigade to cancel or boycott the championship.

In response to the various protests and petitions, the EUFA president Michel Platini slapped down the boycotters:

In a strongly worded rebuke to the president of the Palestinian FA, Mr Plarini rejected his demands and said that Uefa did not believe in “punishing people and isolating them”.

He wrote that Israel had “earned the right to host the competition through a fair, democratic vote”.

Prior to that deal, Palestinian FA president Jibril Rajoub had written to Uefa claiming Israel was “in direct violation” of Fifa regulations. He wrote: “For athletes in Palestine there is no real freedom of movement and the risks of being detained or even killed are always looming before their eyes.”

In response, Mr Platini criticised Mr Rajoub for leaking his complaint to the media — a move he said was “ill-advised”.

“I was surprised to read in the press that you had written me a letter… I know you to be direct and frank, qualities which I greatly appreciate, but which it seems not all your advisers share.

“We cannot hold the Israel FA responsible for the political situation in the region or for legal procedures in place in its country. You know better than anyone that it is not by punishing people and isolating them that we achieve our aims. It is through dialogue that solutions are found.” 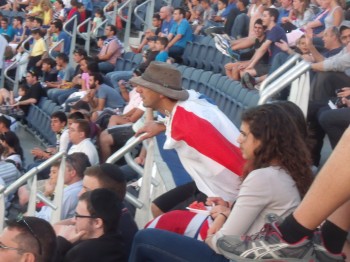 Kol hakavod to Mr. Platini and EUFA for not giving in to the boycotters, and kol hakavod to the Israeli football association for organizing an excellent and successful competition – even if the Israeli team didn’t win.

For some entertaining coverage of the competition, read Richard Millett and Adam Levick’s joint live-blogging of the England v. Israel match at Teddy Stadium in Jerusalem. Our next item stays with the cultural scene, although on the musical side of things. Sir Cliff Richard (when did he become a Sir?), the famous and much-loved British pop star, is coming to Israel to perform in July. In fact Cliff Richard is so popular that the organizers have just added a second show to his Israeli schedule:

he first thing you notice about talking to Richard is how genuinely affable he appears. And the second thing is how closely his speaking voice resembles that of another British rock pioneer – Paul McCartney.

Richard, who scored an astonishing 43 Top 20 hits in England between 1958 and 1969 and was considered to be Britain’s answer to Elvis, was a huge star when The Beatles were still playing four sets a night in Hamburg. They rose out of the same grassroots skiffle movement that conquered England in the mid-1950s and captivated the heart of the teenager (born Harry Webb), who had moved with his family to Hertfordshire, England from his native India at age eight.

“Skiffle was homemade music, as it made it possible for people like myself to become involved in some way without a lot of skill,” said Richard. “I learned how to play guitar and got good enough to play and sing in a skiffle group in my local town.”

“One day the drummer and I were talking over coffee, and he asked me if I liked playing skiffle. I answered that I did, but I preferred rock & roll. He answered ‘I do too.’ So we quit and formed our own rock & roll group.”

After a few incarnations, that morphed into The Shadows, and Harry Webb evolved into Cliff Richard.

Collaborations with John, Mark Knopfler, Freddie Mercury, Stevie Wonder and Van Morrison gave proof to the esteem in which he was held by his peers, and his occasional reunions with The Shadows have been marquee events. Having quickly sold out his announced show in Israel, promoters added a second show for fans who recall Richard’s heyday.

“I’m thrilled about the turnout, because I was dubious since it’s been a long time since I’ve had a hit in Israel. One show would have been fine, and two is great.

But even if it was a half-filled arena, we would still go out and put on a great show.”

It’s going to be a great summer for Israeli music fans with all the visiting stars. Looking forward to seeing you here, Sir Cliff!

Our next few items are all connected together to Israel’s hi-tech industry.

The big news of this week was the sale of the Israeli GPS and maps smartphone app Waze to Google for over $1 billion. Although I’m a bit conflicted about this sale – I wish Israeli hi-tech could stay in Israel – this is a huge success for the brilliant developers of Waze. At least Waze’s owners succeeded in keeping their activities in Israel – for the time-being at least:

Waze achieved all the demands it presented to Google in the negotiations: Waze’s activity will remain in Israel for years, Google cannot fire a single employee out of Waze’s 107 workers, and the entire acquisition sum – about $1 billion – will go into the pockets of the investors, founders and employees in cash, without stocks whose value would change unexpectedly.

Google will complete the acquisition within about a month in a bid to integrate Waze into the Android 5.0 operating system, expected to be launched this year.

“Nothing practical will change here at Waze. We will maintain our community, brand, service and organization – the community hierarchy, responsibilities and processes will remain the same. The same Waze people will continue to collaborate with you, and we will continue to innovate our product and services, making them more social, functional and helpful for everyday drivers. Our employees, managers, founders and I are all committed to our vision for many years to come.

“Why not stay completely independent? We asked ourselves: “Will Waze still be a fun project to participate in, and a fun place to work, as a stand-alone public company?” Choosing the path of an IPO often shifts attention to bankers, lawyers and the happiness of Wall Street, and we decided we’d rather spend our time with you, the Waze community. Google is committed to help us achieve our common goal and provide us with the independence and resources we need to succeed. We evaluated many options and believe Google is the best partner for Waze, our map editors, area managers, champs and nearly 50 million Wazers globally.

“Together, we can accelerate our mission to outsmart traffic. We will continue to make a real impact on drivers globally, helping them save time and money while making everyone’s daily commute a bit more efficient and fun.

“So, it’s back to work for us with some great new colleagues and resources to enhance our project. Thank you for your participation in shaping Waze to what it is today, and we look forward to continuing to build out Waze together with you.”

Waze was founded in 2007. Noam Bardin, who lives in the United States, serves as its CEO. The company’s application is considered the world’s biggest social network-based navigation app thanks to 45 million users and a market share of 10% of all navigation apps in the US.

In the past year, Waze tripled its number of subscribers from 15 million to 45 million, and in March alone it had 1.5 million downloads around the world.

Waze is today the second most popular map and navigation app in Apple stores, after Google’s map service, in the US, Canada, France and Australia.

On a personal note, I cannot praise Waze highly enough. I would literally be lost without it. I can’t find my way out of a car-park so I don’t dare drive anywhere unfamiliar without the dulcet tones of Waze directing me to my destination.

Kol hakavod to the developers and inventors of Waze – may they have many more huge successes like this.

Talking about smartphones, an Israeli-developed device will enable the vision-impaired to be able to use these phones:

Beginning this week, blind Americans have the opportunity to use the first smartphone specifically designed to make their lives easier to navigate. Odin Mobile is the first company to offer the RAY Huawei Vision phone, a device that lets blind users not only make phone calls, but also allows them to send text messages, search the Internet, identify the denomination of cash, recognize colors, and access over 100,000 audio books and magazines. All these features are built into the RAY device, and it’s based on technology developed in Israel.

Once again, kol hakavod to Israel’s highly inventive minds which strive to make life better for everyone.

And for the final item of today, the inventor of Ethernet, the technology on which the internet is based, awarded the Israeli company RAD Data for creating the best network product:

When the creator of the computer network as we know it tells you that you have a good networking product – the best in the world, in fact – then you know you’ve done a good day’s work. That, in fact, was the message that the co-inventor of Ethernet technology, Dr. Robert Metcalfe, had for Israel’s RAD Data Communications, when, heading the panel of judges at this year’s NetEvents Technology Innovation Awards, he awarded RAD Data the award for “best in class infrastructure equipment and innovative solutions to Service Providers’ current challenges” for its MiNID communication device.

The idea, RAD Data CEO and President Dror Bin told the Times of Israel last year when the product was first introduced, is to enable managers of telephony networks to configure their systems in an instant, enabling them to quickly upgrade or connect to new services with no fuss or muss. Phone companies who want to sign up clients among local landline and cell service providers “can send out the MyNID in an overnight envelope, and the service provider just has to plug it in in order to enter its parameters in the network,” said Bin. With the device, service providers save dozens, if not hundreds, of hours of configuration work, with the attendant cash savings as well.

Kol hakavod and mazal tov to RAD Data for their invention and their award, and also to Dr. Metcalfe for recognizing the superiority of Israeli technology.

And with this plethora of good news, I bid you all Shabbat Shalom!