Egypt appears to be on the verge of another revolution, or possibly even a civil war, as we read in this prescient report of Yisrael Hayom from Friday:

Two and a half years have passed and the Egypt of today is no longer on the precipice of a revolution, rather a civil war. The protests scheduled for this Sunday, initiated by the opposition, move Egypt to the edge of the volcano. The lava, if God forbid it erupts, will spare no one.

The Muslim Brotherhood, with the support of the street, has democratically won every possible election since the November 2011 parliamentary race, with the pinnacle on June 30, 2012, when Mohammed Morsi was sworn in as president. Since then, he and his brothers have only led Egypt down a path of diminishing power — politically, economically and socially. For certain sectors of the population, Morsi is even proving to be worse than Mubarak. Some 18 million Egyptians have already signed a petition calling for him to step down.

What can we expect in the next round of upheaval? And of course, what will the army do? It has stayed neutral thus far and has already declared it will intervene if the situation deteriorates into total chaos. The military, in contrast to the people, has something to lose. To say that the military does not like Morsi very much is also fair to say.

On Sunday, Morsi will celebrate the one-year anniversary of his government. A “happy birthday to you, Dr. Morsi,” this will not be. The burning lava will erupt; the main question is only how far it will reach.

We can see how far it reached, at least physically, from these dramatic photos (which I found on Twitter) of the huge demonstrations in Egypt yesterday. The streets of Cairo appear to be filled with demonstrators in every square inch. 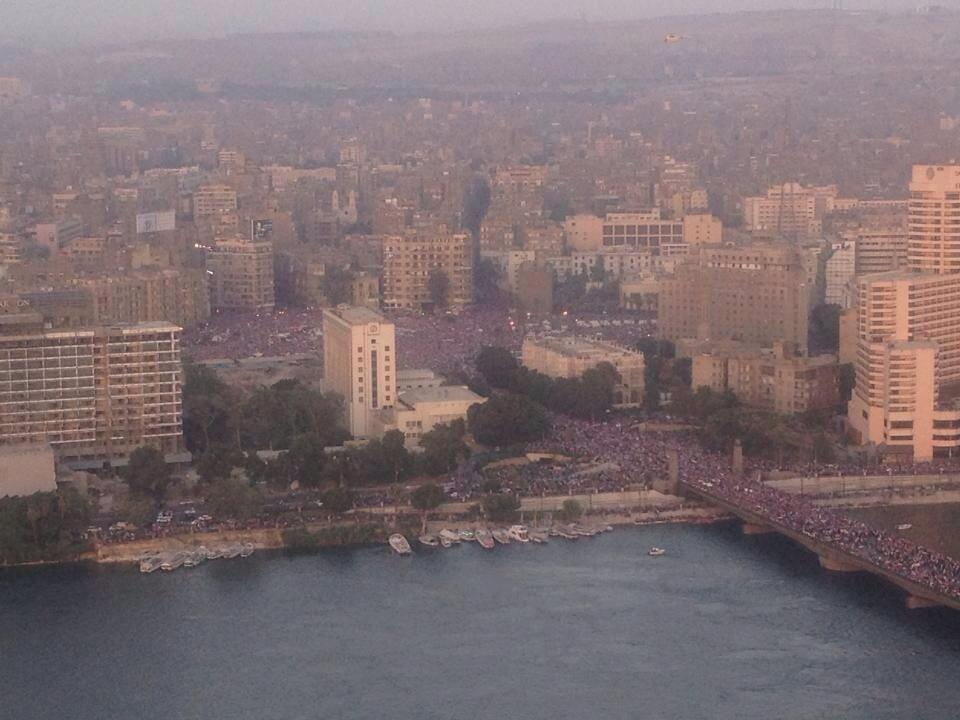 The demand of the protestors was that President Mohammed Morsi resign by Tuesday:

Egypt’s Tamarod movement (Arabic for ‘rebel’) has presented President Mohammed Morsi with an ultimatum – step down by Tuesday at 5 pm or face a civil revolt.

In a statement issued Monday morning, the movement threatened it would call on the masses to storm the presidential palace in Cairo if the president does not resign.

However, the palace appears undaunted by the threats. A source who spoke with the London-based Al-Hayat newspaper said that Sunday’s protests should not be taken as an indication of the extent of support for Morsi.

The demonstration suffered from violence from one side or the other as well:

Meanwhile, Egypt’s Al-Masry Al-Youm newspaper reported that 14 people were killed and 900 were injured since protests began on June 30, according to healthy ministry data. The figures apparently also refer to the weekend demonstrations. Egyptian medical sources say at least five were killed on Sunday alone.

It also looks like the protestors are in it for the long haul:

Protesters are calling widespread labor strikes to start Monday, although unions have yet to give a read out regarding how much they plan to participate.

Aside from renewed presence at Tahrir and the palace, organizers are also calling for a sit-in at the Cabinet building, interim parliament, and another presidential site where Morsi was staying during Sunday’s rally.

The Times of Israel too wonders whether these new protests will turn into an echo of Mubarak’s twilight time:

The prevailing sense in Cairo, as well as cities like Alexandria and Port Said, is that the fuel fumes are already in the air, and that an explosion Sunday is all but unavoidable.

In the run-up to Sunday, eight people have been killed and hundreds have been wounded in clashes between the two rival camps. In Port Said, an explosive device was hurled at opposition protesters, causing the death of an Egyptian journalist, and violence between Morsi supporters and opponents has been recorded in other cities too. An American Jewish college student, watching the clashes in Alexandria, was stabbed to death. And the real street battle has yet to begin.

Many in Egypt hope that the military will be able to prevent a deterioration into civil war, even at the price of establishing military rule. It is doubtful that the army wants to go down such a path. Egypt’s Defense Minister Abdel-Fattah al-Sisi, who hinted last week that the army will intervene if the violence becomes unbearable, realizes the implications of shoving aside an elected president in favor of military rule — even if only temporarily.

A-Sisi and his friends learned from the experiences of Hussein Tantawi, who headed the Military Council that succeeded Mubarak, that sooner or later public anger will turn on them. Still, the army could be forced to intervene in order to regain stability, in a matter of days rather than weeks.

This underlines a first major problem for Morsi: Even if the June 30 incidents don’t end in his ouster, as Tamarod demands, his position has been significantly weakened.

The young people leading the revolt claim they’ve collected the signatures of 22 million citizens who demand he leave office, a little less than twice the number who voted him into office (13.2 million).

A question mark now hovers above his legitimacy, as Egypt’s secular population has managed to unify around a single shared goal: new presidential elections.

Morsi’s second problem, no less significant than his political weakness, relates to his physical well-being. According to Egyptian media reports, the president and his family were transferred over the weekend to a safe house under the protection of the Presidential Guard (which claimed it could not protect him in his residence on the outskirts of Cairo.) The Presidential Palace was also reportedly emptied of staff.

In essence, Morsi — who has never enjoyed the close relationship with the army that Hosni Mubarak did — is now completely dependent on a-Sisi and his men.

The Jerusalem Post has a very detailed article about the Egyptian clashes, and concludes with the words of the Egyptian man-in-the-street:

Many bellowed their anger at Morsi’s Muslim Brotherhood, accused of hijacking the revolution and using electoral victories to monopolize power and push through Islamic law.

Others have been alienated by a deepening economic crisis and worsening personal security, aggravated by a political deadlock over which Morsi has presided.

Liberal leaders say nearly half the voting population – 22 million people – has signed a petition calling for new elections, although there is no obvious challenger to Morsi.

The opposition, fractious and defeated in a series of ballots last year, hope that by putting millions on the streets they can force Morsi to relent and hand over to a technocrat administration that can organize new elections.

Religious authorities have warned of “civil war”. The army insists it will respect the “will of the people”, though the two sides have opposing views of what that means.

Islamists interpret that to mean army support for their election victories. Opponents believe that the army may heed the popular will as expressed on the streets, as it did in early 2011 when the generals decided Mubarak’s time was up.

Having staged shows of force earlier this month, the Brotherhood has not called on supporters to go out on Sunday.

Among the Islamists in Cairo, Ahmed Hosny, 37, said: “I came here to say, ‘We are with you Morsi, with the legitimate order and against the thugs’.

“This is our revolution and no one will take it from us.”

At Tahrir Square, banners ranged from “The Revolution Goes On”, “Out, Out Like Mubarak” to “Obama Backs Terrorism” – a reference to liberal anger at U.S. support for Morsi’s legitimacy and criticism of protests as bad for the economy.

There were other banners too, banners that called Morsi a Zionist. Why? Because when all else fails, blame the Jews. (h/t Israellycool).

Going back to the JPost article:

“I am here to bring down Morsi and the Brotherhood,” said Ahmed Ali al-Badri, a feed merchant in a white robe. “Just look at this country. It’s gone backwards for 20 years. There’s no diesel, gasoline, electricity. Life is just too expensive.”

There are some similarities with Turkey, where an Islamist prime minister with a strong electoral mandate was confronted in the streets by angry secularists this month. But Egypt is much poorer, its economy is crumbling rather than booming and its new democracy was born in a revolution just two years ago.

For many Egyptians, all the turmoil since 2011 has just made life harder. Standing by his lonely barrow at an eerily quiet downtown Cairo street market, 23-year-old Zeeka was afraid more violence was coming.

“We’re not for one side or the other,” he said. “What’s happening now in Egypt is shameful. There is no work, thugs are everywhere … I won’t go out to any protest.

I can’t help feeling sorry for the Egyptians even though they should have known better what to expect when voting in a regressive thuggish dictatorial Islamist party like the Muslim Brotherhood.

13 Responses to A second Egyptian revolution?