Last night we heard the sad news that St.-Sgt. Maj. Shlomi Cohen was killed by Lebanese sniper fire on the Israel-Lebanon border.

An IDF soldier has been killed by cross-border gunfire from Lebanon while driving in an army vehicle on Sunday night. He has been named as 31-year-old St.-Sgt. Maj. Shlomi Cohen, from Afula.

Cohen, an officer from the Israel Navy, was carrying out an official mission near an IDF border post in the Rosh Hanikra region, and was driving some 50 meters away from the border, when six to seven shots struck him and the jeep, critically injuring him.

Paramedics rushed Cohen to the Nahariya Hospital for the Western Galillee, but he succumbed to his injuries soon afterwards.

The circumstances of the shooting are not clear. Sgt. Cohen should not have been in the area on his own. On the other hand what was the motivation of the Lebanese soldier who opened fire without provocation?

Lebanese sources said they had lost contact with the Lebanese soldier after the shooting.

UNIFIL’s force commander is in contact with counterparts in the Lebanese and Israeli army, urging restraint.”

Perhaps if UNIFIL were to do its job instead of simply urging restraint after the event, this might not have happened in the first place.

Cohen will be laid to rest at the Haifa military cemetery on Monday evening.

Maj.-Gen. (Res.) Israel Ziv, former head of the Operations Branch in the IDF, told Army Radio on Monday morning that the IDF will have to examine how Cohen was permitted to drive alone at night near the frontier.

“The chances of Hezbollah [being responsible]  are very low. This does not fit in with their pattern, it’s not in their interest, and it didn’t occur in an area they are active in,” Ziv said.

“What was the motivation of the [Lebanese] soldier? All options could be true. The Lebanese army also does not have an interest in this happening,” Ziv added. He added that the Lebanese Armed Forces, which has limited capabilities but strong discipline and internal order, will investigate the shooting.

Yaakov Biton, a relative of Cohen, described him as a “modest, quiet guy, very dedicated to his wife and daughter.” Weeping quietly while speaking to Army Radio, Biton said Cohen leaves behind his wife, Ma’ayan and a daughter who will turn one next month.

The young family had bought an apartment and planned to move soon. “All of these plans are gone now,” Biton said.

Baruch Dayan Emet. יהי זכרו ברוך. May his memory be for a blessing.

Meanwhile, the Guardian, in full blame-Israel mode, turns the incident on its head, at least in its extremely misleading headline, thus: 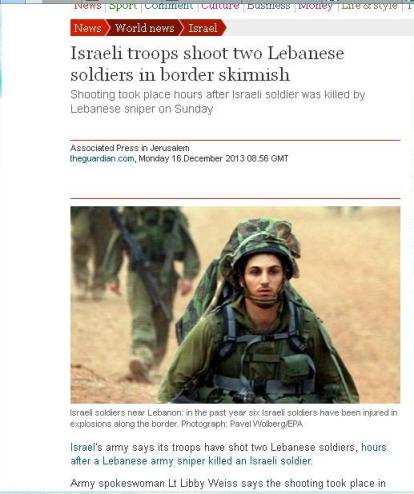 According to the Guardian, Israel hits back first

While the text of the report itself is fairly neutral, the headline – beyond which many readers do not bother to read – is highly tendentious.

Shame on the Guardian (as always) for not matching its headlines to its reports, and for using tendentious and inflammatory language to smear Israel’s good name.