Sledding down the street in the Nahlaot neighbourhood of Jerusalem

I would have posted this earlier except we had a 3 hour power cut earlier. And we didn’t even get one drop of snow! Obviously the electric company are struggling to restore power to Jerusalem, Judea & Samaria and the north, so they took from Petach Tikva to give to them. I’d like to think so anyway, otherwise I’ll be very cross. 😉

The latest news is that the main roads into Jerusalem are finally open to traffic after many delays and stops and starts.

Police finally fully reopened the main roads to and from Jerusalem on Sunday afternoon, after more than two-and-half days of closures because of heavy snow in one of Israel’s worst ever storms.

Buses started to run again inside the city in early afternoon, but mainly in central areas. The light rail was still out of service and was unlikely to restart before Monday. The municipality was bringing in 100 tons of salt from the Dead Sea to help de-ice city roads. Drivers were told to stay off the roads if at all possible.

Several major roads across the country remained closed, and access to many settlements in the West Bank was still being cleared Sunday, with numerous communities accessible only by 4×4 vehicles.

The weekly cabinet meeting was postponed from morning to mid-afternoon because of the difficulties accessing Jerusalem.

When it convened, Prime Minister Benjamin Netanyahu said Israel had grappled well with the storm, but that there were still challenges ahead. He said the priority was and remained “saving lives,” and warned drivers to take particular care on the still icy roads.

Public Security Minister Yitzhak Aharonovitch said there were certainly “lessons to be learned” from the crisis, but rejected criticism of the authorities’ handling of the storm, denied there had been a major failure, and said there was no place for a commission of inquiry.

Some 14,000 households were still without power nationwide as of Sunday afternoon, Israel Electric Corporation chief Yiftah Ron-Tal said, including 6,000 households in Jerusalem and its environs. Some 80 villages and communities around Jerusalem had been without power at the height of the storm, and 30 were still disconnected on Sunday. At least three villages in the Golan Heights, which is better equipped to handle storms and snowfall, had been without electricity over the weekend, but were reconnected Saturday night. Power to affected Upper Galilee areas was set to be restored by Sunday night.

In the Binyamin Regional Council, covering the settlement areas in the West Bank north of Jerusalem, there were still about 3,000 families who had been without power or water since Friday, council spokeswoman Tamar Asraf told Israel Radio Sunday afternoon. “We are still in a hard situation… but things are starting to open up,” she said.

Schools stayed closed Sunday in Jerusalem, the Etzion Bloc and much of the rest of the West Bank, Mevasseret Zion, Safed and the Golan Heights. A handful of scattered schools elsewhere in the country, including in the northern Negev, were also closed.

The storm, which hit hard in Syria, Jordan, the West Bank, Gaza and Egypt as well, and was given the international name Alexa, was largely over in Israel by Saturday night. Sunday was sunny in much of Israel, but still with colder-than-normal temperatures for December.

The Sea of Galilee rose 8 centimeters as a consequence of the storm, which also threw 176 millimeters (7 inches) of rain onto Jerusalem, and 157 millimeters (over 6 inches) onto Tel Aviv — far more than the usual rainfall in those cities for the entire month.

The damage caused by the storm was assessed at over NIS 120 million ($34 million), according to Israel Radio. Officials from the Finance Ministry said the Treasury would look into covering some of the costs incurred by municipalities in dealing with the consequences of the storm, such as floods and damage to infrastructure. Agricultural damage was put at NIS 100 million.

On Saturday afternoon, the bodies of two men from the Bedouin town of Rahat were found by rescue services after three days of searching. The men had set out on Wednesday in a 4×4 and went missing near the Dead Sea. Police believe their vehicle was swept away in the storm in the area of Nahal Tze’elim.

Overnight Friday-Saturday, a one-year-old toddler in Lod died of injuries that he sustained when the heater, placed in his room to combat the severe cold brought on by the storm, caught fire. The toddler’s father sustained light injuries trying to save him.

On Friday, a 36-year-old Rishon Lezion resident slid off of his roof and died during the storm. The man had climbed onto the roof to repair a leak, according to local sources. The impact of the fall from a height of approximately 15 feet was fatal, a Magen David Adom crew that arrived at the scene said.

Many of the places mentioned in the above report are relevant to my family. As mentioned in my previous post, my younger daughter and husband are still snowed in in Elazar, Gush Etzion, outside Jerusalem. 3 of my nieces and nephews, with 7 children between them were snowed in with no electricity in various communities around the Shomron since Thursday night. Two of them have since managed to leave, but one of them is still snowed in. They were hoping to have electricity restored today.

Here’s an earlier report from the Times of Israel. 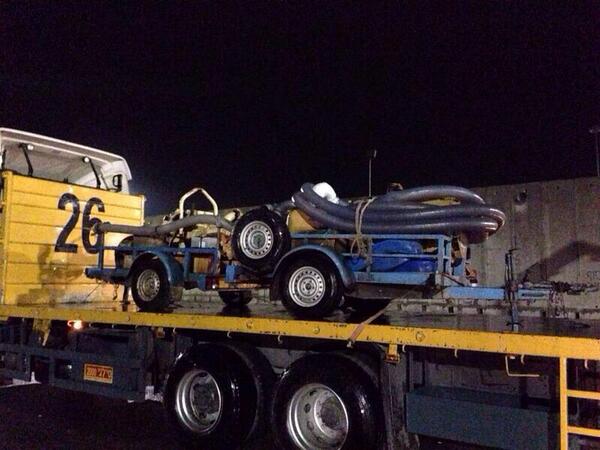 In case anyone should accuse Israel of caring only for its own people, the IDF opened the Gaza border crossing (via the Algemeiner) on Friday to allow in fuel, water pumps and other supplies in the face of this extreme storm:

As a result of the weather and a request by representatives of the United Nations to the head of the Coordinator of Government Activities in the Territories (COGAT), Major General Eitan Dangot, the Kerem Shalom Border Crossing was opened specially this morning in order to transfer gas for home heating. Additionally, as the day goes on, four water pumps will be transferred to the Gaza Strip due to heavy flooding.

The additional activities at the Kerem Shalom Border Crossing, as well as the transfer of additional water pumps is being made possible by the COGAT, the Ministry of Defense and the company Mekorot, in coordination with UN agencies.

The IDF aid to Gaza continued through Shabbat:

Also, following discussions between COGAT and the International aid agencies operating in Gaza, the transfer of humanitarian aid into the Gaza Strip through the Kerem Shalom crossing will continue tomorrow. This includes 1.2 million liters of gas: 800,000 liters of diesel fuel for transportation, and 400,000 liters of diesel fuel for the Gaza power station, and another 200 tons of household gas. The Coordinator of Government Activities in the Territories maintains ongoing coordination with the Palestinian Authority.

Now that the storm is over the blame game is setting in.

Only thanks to Israel Defense Forces armored personnel carriers and other heavy equipment were the main arteries in Jerusalem and the north (especially Safed) rendered serviceable.

The IDF worked together with the Israel Police to help citizens who had been stranded on the various highways over the weekend. IDF soldiers could be seen canvassing entire neighborhoods in Safed and Jerusalem, knocking on doors and providing relief: food, heating pads, and water. Some eight APCs helped clear snow and in some cases towed vehicles that had been left on the road.

Prime Minister Benjamin Netanyahu held a special briefing on Saturday along with a host of officials, including Jerusalem Mayor Nir Barkat and Israel Police Commissioner Insp. Gen. Yohanan Danino. Netanyahu noted that the first-responders were duly prepared for the storm. He stressed that the quality of the response in Israel surpassed that of other nations who had experienced similar weather-related crises. “In other countries such a storm usually has a death toll and involves a much longer paralysis,” Netanyahu said.

Netanyahu praised the police for diverting traffic away from the Jerusalem-Tel Aviv highway throughout the storm. “This was a lifesaving decision,” Netanyahu said. “This was a severe development that is a result of climatic behavior; it happens once every 100 years; our first and overarching priority is to save lives.”

The Prime Minister’s Office dismissed calls for a probe into the authorities’ response and pointed out that the damage was not as bad as what other storms inflicted elsewhere. In February 2013, it said, a snowstorm on the U.S.’s eastern seaboard resulted in the deaths of 18 people, with more than 500,000 people left without power for six days.

Danino deflected criticism of the police’s supposed lack of preparation, saying, “I am well aware of the criticism, which is very characteristic of who we are as a nation and of Israel in general; of course the experts are having a field day, especially because TV programming is dedicated to this. I have this to say: Stop whining and let’s all join forces to help the people of Israel lead a normal life once again.”

Smadar Bat Adam in Israel Hayom recommends finding solutions before deciding whose head should roll for possible incompetence in dealing with the storm.:

I recommend practicing a little bit of caution before deciding whether the events of the past few days constitute a fiasco, and before we choose whose heads must roll to prevent the same thing from happening when the next storm hits. With that, however, as a common person I also have some questions: What exactly is the job of the Israel Defense Force’s Homefront Command and why wasn’t it involved? Why was the Israel Defense Forces, which has the heavy equipment to cope with extreme conditions, not instructed to act as early as Thursday? Why was the train not ordered to run from the onset? Did all of the municipalities follow the standard emergency procedures? And do the cities located in harsh winter areas have preparation procedures in place, beginning from tree trimming all the way to having enough generators on hand to meet the needs of the residents?

And what about public service announcements to inform people what they need as far as food and equipment (emergency lighting, gas burners, bread, jam, halvah, sausages, water) to prepare for and cope with being stuck in their homes for a few days?

These are very pertinent questions and I’m sure all Israelis look forward to hearing relevant answers from the authorities.

To round up this extreme weather report, here are a few pictures, some taken by my children in or near their communities in the Shomron, some taken by friends or from facebook pages. To view the pictures in full size click one of the pictures, and then click “escape” to go back to the blog.

Snow in Bet El (via Hillel Maeir’s Google Plus page

Snow in Bet El (via Hillel Maeir’s Google Plus page

Snow in Karnei Shomron, where it doesn’t usually fall

2 Responses to Snowstorm roundup and pictures