Too much matza, wine and sun have made me lose track of time and I’ve almost left it too late for this week’s Good News Friday edition, so this is going to be a quickie.

An Israeli-developed item which is sure to take everyone’s fancy is  a pocket-sized printer:

Today you carry everything you need in your pocket. The smartphone revolution has made your phone, PC, camera and navigation device so portable – they are always available at your fingertips. However, there’s one product many of us use daily that still requires a lot of space and will never fit in your pocket (unless you have exceptionally large pants) – the printer.

A fresh Israeli Kickstarter campaign aims to change all that with the ZUtA Pocket Printer. The cute teardrop-shaped robot printer can be placed on any page and scurries back-and-forth, printing as it goes along. The campaign has a lofty goal of $400,000, but the project shows great promise.

“We live in a world where people are constantly on the go and are running their chores everywhere,” says Tuvia Elbaum, who is the entrepreneur behind the project. “But there’s one office tool that’s still stuck behind, hasn’t changed in the past decade and isn’t mobile.” The ZUtA (Aramaic for “small”) printer is just 10cm high and 11cms in diameter, which might not fit in your jeans, but definitely makes it much more portable than any standard printer.

What a brilliant idea! And what a cute shape it is too!  🙂 .   Kol hakavod to Tuvia Elbaum and all those who backed his Zuta project.  An extra kol hakavod because the developers come from JCT – the Jerusalem College of Technology, aka Machon Lev, where my son-in-law is studying electronics. [Who says nepotism is dead?  😉  ].  Watch the printer in action:

My next item is more of a political development but it is welcome good news just the same (via Brian Goldfarb): A Palestinian entrepreneur who sees Israel as an ally, not a foe. This is not something to be sneezed at in today’s hostile atmosphere.

It’s not too often that you find a prominent Palestinian agreeing with Economics Minister Naftali Bennett — but Ramallah-based entrepreneur Hani Alami is unique in that respect and many others. “There is plenty of blame to go around for the political situation,” Alami told the Times of Israel in an exclusive interview. “There are no men of vision on either side. But economically, there is no reason the two sides cannot cooperate, and in fact that would benefit both the Israelis and Palestinians.”

While Alami does not care for most of Bennett’s positions, he is in favor of advancing tech and economic cooperation. “On this I do agree with him,” said Alami.

Alami is well-qualified to discuss matters of high-tech cooperation. A self-made mogul, Alami runs Coolnet, a Ramallah-based internet service provider that specializes in bringing service to rural areas where broadband is afraid to venture. The Coolnet site unhesitatingly lists several Israeli partners, including Radwin, Radcom, RadVision and Ceragon. Last September, Alami rushed to rescue Israeli telecom firm Alavarion, a 4G communications company, from bankruptcy with a $10.5 million “care package.” Since then, Alami sold his stake in the company, he revealed, saying that he didn’t think the company would be able to solve its debt issues.

For Alami, partnering with Israeli firms — and with Israelis — is natural. He knows all the top Israeli tech figures, even tech guru Yossi Vardi, and is as at home in Tel Aviv as he is in Ramallah. Alami is most passionate about Jerusalem, especially East Jerusalem, where he says there could be an active entrepreneur scene that would benefit everyone in the city — Israeli or Palestinian, Jewish or Arab.

“We both see Jerusalem differently, and we have that right — Israelis can see it as their capital and Palestinians can see it as theirs. But that has nothing to do with providing opportunities for all residents. If you say that the city is one unified unit, then providing equal treatment and equal opportunity is an obligation.” Alami said he held a meeting with Jerusalem Mayor Nir Barkat and told him exactly that. “If we are one city, help us,” Alami recalls telling Barkat. “If not, let us go our way.” Barkat got the message, Alami added, and a number of programs are being formed, many involving Israeli and multinational companies and support from the municipality.

The better off Palestinians are, the better off Israelis will be, Alami said. “It’s in Israel’s interests to promote economic stability, regardless of the politics.

Alami realizes that his ideas contrast sharply with those of the radical groups, some of which prefer to see the Palestinians remain in a constant state of “struggle,” rather than build successful lives without an independent Palestinian state. He notes that Fayyad’s reforms and the growing Palestinian middle class have not diminished their drive for self-determination. “Even though things are much better economically than they were, people are no less interested in the politics of the region.”

Many of those radical positions are espoused by foreign groups, some represented by NGOs that operate in the PA. Alami emphasizes the foreignness of those groups. “Their agendas are not always our agendas,” said Alami. “I have even been approached by governments for support of ideas for projects that they apparently feel strongly about, but that, in my judgment, will not benefit Palestinians. I tell them politely but firmly, thanks but no thanks.”

Israel has its own agendas and interests. In the tech field, though, Alami thinks they are closely aligned with the Palestinians’. “I strongly agree with the Israelis who see the region as having a great tech potential,” he said. “The Palestinians need help and Israel has the resources to provide it, and many in Israel have told me that they want to help.”

Many Israeli tech executives already work on projects to raise the level of technology education and entrepreneurship among Palestinians. All of them work “under the radar” in order to prevent bad publicity — or worse — that would ruin the delicate ties that many in the tech industry on both sides, Alami included, have struggled to build. “It’s a matter of time,” he said. “We’ve come a long way since we started and we have a way to go, but the idea of tech cooperation with each other is something we all want and will eventually come to the fore.”

You don’t need to agree with all Alami’s politics and statements in order to agree with the most salient points – that economic and cultural cooperation between Israel and the Palestinians, i.e. normalization, would be to the greatest benefit of both sides.

Kol hakavod to Hani Alami. Would that there were many more Palestinians like him.

To conclude this week’s special Pesach edition, here is a photo of yesterday’s Birkat Cohanim (Priestly Blessing) at the Kotel, via police spokesman Mickey Rosenfeld’s Twitter feed. Look at the amazing sight of the Kotel filled to overflowing with Jewish pilgrims fulfilling the mitzvah of aliya le’regel (pilgrimage to Jerusalem on the Festivals). 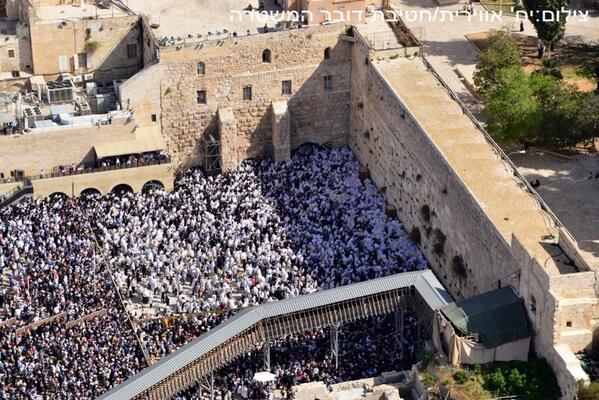 My hubby and I made our own aliya le’regel to Jerusalem yesterday afternoon, and experienced several miracles, all in the form of lack of traffic jams both to Jerusalem and within the city itself. Truly Mashiach-zeit!

The kotel from above

Expanded women’s section of the kotel

King David Hotel in the distance

Expanded women’s section of the kotel

entrance to Mamilla Mall outside the Old City walls