Fisking Fisk: Why Spain didn’t invite the Muslims back too

The Independent newspaper’s journalist Robert Fisk is well known for his, um, how shall I put it, inaccurate and highly biased articles about Israel and the Middle East. His name has become synonymous with ripping apart articles for inaccuracies, hence “to fisk”. To be honest I usually avoid fisking Fisk because he is so predictable, and his credibility appears to be close to zero amongst those who really understand the Middle East. But his latest whine is just itching for a fisking so here goes. 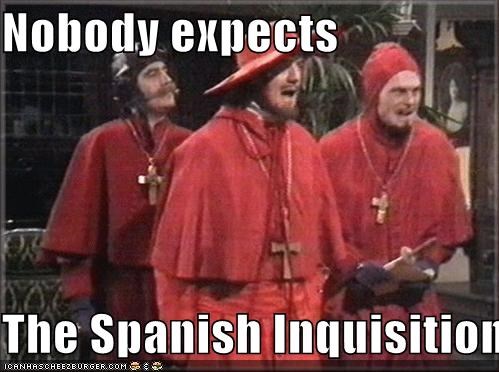 The famous sketch from Monty Python

Fisk wrote a whine (there is no other way to describe it) about the fact that Spain has offered citizenship to Jews who can prove they fled Spain during the Inquisition, and is upset that the Muslims haven’t been offered the same benefit, especially considering that they too suffered under the Inquisition.

Fisk starts off immediately with a mention of Palestinians in the context of “lost homes around the world”. Not one word about the Jewish homes lost throughout Europe, nor those in Israel which were occupied and destroyed by Arabs during the years prior to the establishment of the state and during the years of Arab occupation from 1948 to 1967.

Lost lands are littered with the homes of those who lived there. Armenian houses in south-eastern Turkey. Abandoned Palestinian homes in Israel. German property in what was the Sudetenland and Prussia. There are Greek homes around Smyrna – now Izmir – and down the west coast of Ireland lie the roofless cottages of those who died or emigrated in the Great Famine.

He continues with a brief history:

The year of darkness, of course, was 1492, when the Moorish kingdom of Granada surrendered to Ferdinand and Isabella. Christian power was restored to the lands in which Muslims and Jews had lived together for hundreds of years and had rescued some of the great works of classical literature – by way of Baghdad – for us to study.

We can leave aside the fact that Muslim-Jewish relations were not always quite as rosy as we have been led to believe for there are conflicting opinions.  He continues:

In just over 100 years, the Christian monarchy of Spain had expelled half a million Muslims and between 200,000 and 300,000 Jews. There are now around 3.5 million Sephardic Jews in the world. Their ancient homes also still exist in Spain.

That is a very strange statement to make. How could there possibly be any way for any Sephardic Jews to point with certainty to any family home in Spain, not after being expelled over 500 years ago.  The country of Spain itself hardly resembles what it looked like 500 years ago.

But now Spain and Portugal want to make amends, so we are told. They will give citizenship – full passports – to the descendants of families expelled from their countries. The government regards the expulsions as “a tragedy”, or – in the words of Spain’s justice minister – a “historical error”. It was, of course, an ethnic cleansing, a massive crime against humanity, but don’t let’s expect too much from our Spanish and Portuguese friends, as there are, unfortunately, a few problems. For example: Muslims need not apply.

Fisk now gets to the meat of his complaint. (emphases are mine):

Jewish descendants of those expelled from the Iberian peninsula in the 15th and 16th centuries can claim a passport which will allow them to travel freely in 28 EU countries. Many of those expected to apply live in Israel.They are being given a “right of return” – a right which Israel does not, of course, grant to the former Arab inhabitants of Palestine who were driven from their homes after the creation of Israel.

This is so typical of Fisk, working the Palestinians into a story in which they are not involved or related at all.  Why not mention the inhabitants of Tibet, or any of the multiple regions of the former Soviet Union, who were driven from their homes adn have not been granted the right of return by their host countries – or Spain for that matter!

Also typically, Fisk only mentions israel in the most negative of fashions. Hence the mention of the denial of the ostensible Palestinian “right of return” – a “right” that has been proven to not exist. Israel was mandated by the Balfour Declaration, confirmed by the San Remo Convention to be a homeland for the Jewish People. Not for the Palestinians, who did not exist as a separate nation until their invention in the 1960s, and not for anyone else. Just as Britain allows in British nationals automatically, but demands special visas from foreigners, (or for that matter America, France or any other country in the world), so too Israel has the full right to grant automatic citizenship to Jews but not to other nationals.

Spanish and Portuguese officials preferred not to dwell on such matters – nor to explain why they have chosen to discriminate racially between those who were expelled from their lands 600 years ago.

Perhaps because the Muslims were the original occupiers of Spain and had a record of starting wars of conquest wherever they could? After all the Christians conquered Spain from the Moors, aka the Muslims. It is quite obvious why they are not as forthcoming with Muslim citizens as they are with Jews.  Fisk himself mentions this in passing, though he can’t resist sneering at Spain:

The tragedy of Andalusia lasted for more than a century and there were Muslim rebellions – put down with Christian brutality – which, so comes the double-speak from Spain, may have disqualified the Muslims from Madrid’s generosity.

And again he weaves in the Palestinian issue for no apparent reason (other than his own obsession of course):

In popular imagination, expulsion in time of war – and this might apply to the Palestinians – somehow doesn’t quite equal the wholesale expulsion of peoples on purely racial grounds. Thus, so this theory goes, the Jewish descendants of 15th century Spain have more rights than their Muslim brothers. A dodgy argument.

We now read another cause for Fisk’s rancour:

… the so-called “generous” offer from Spain and Portugal is not being made for reasons of conscience, but because Jews are “good with money” and will help the economies of these two bankrupt nations. “This is a decision based on economic need,” he writes. “And that is why no invitation was extended to Muslims. The return of Muslims would mean that tens of millions [sic] of people could claim citizenship but they would not be bringing in money.” This is a bit odd. Tens of thousands of Muslims are extremely wealthy and could also bring large sums of money to Spain and Portugal.

If this is so, why don’t those tens of thousands of Muslims fund their Palestinian co-religionists?  It would be an interesting exercise to see how many philanthropic projects are funded by Jews for their Jewish brothers as opposed to similar Muslim projects.  One thing we can be sure of: Jewish philanthropy will never go to fund terrorists of any sort and any religion. Sadly the same cannot be said of Muslims, whose billions of petro-dollars and ther wealth often goes to fund anti-Israel, antisemitic and anti-Western incitement, promotion of terrorism and violence, funding revolutions and all the other “bonuses” that went along with the Arab Winter.

But Fisk refuses to see the unfortunate truth in front of his eyes. It just has to be racism:

No, the real reasons for their racism is that our cousins in Madrid and Lisbon simply don’t want Muslims to come to Europe, let alone become citizens. And they can rely on the fact that very few Jews who take up their offer, many now living in America as well as Israel, will actually come to live in Spain. Muslims might well do so.

So open-minded their brains have fallen out

With all the “benefits” accruing to Western societies from having huge influxes of Muslim immigrants, for example hugely increased rates of violence, violent crime, and religious tension, compared with the very real benefits brought to their host societies by Jewish citizens of every country, one can hardly blame the Spanish even if their decision is politically-incorrect.

Fisk ends his sorry tale of woe by drawing the utterly wrong conclusion:

Spain and Portugal simply want to ensure that the Muslim expulsion is permanent. Andalusia was one of the wonders of what we now call multi-culturalism. The Spanish don’t want it back.

It is nothing to do with the Inquisition, the Moorish conquest of Spain or multi-culturalism. It has a whole lot more to do with the way Muslim immigrants have been behaving in other places in Europe, where they try to impose their will and their religion on their host societies instead of trying to integrate as regular citizens.

Spain looked to France and Sweden and decided that discretion is the better part of valour. Good for them.

6 Responses to Fisking Fisk: Why Spain didn’t invite the Muslims back too