The ground operation of Operation Protective Edge has almost completed its 4th day and despite the massive IDF assault on Hamas’ terror infrastructure in Gaza the rocket-fire onto Israel continues, albeit at a slightly lesser pace.

The biggest blow from today’s news is that another 7 IDF soldiers were killed this morning in battle with Hamas terrorists:

Seven IDF soldiers were killed overnight and early Monday battling Hamas on the Israeli side of the border and inside Gaza, the IDF announced on Monday evening. Four of them were killed during a pre-dawn tunnel infiltration into southern Israel in which Hamas terrorists planned to attack Kibbutz Nir Am, military sources said.

The deaths bring the IDF toll since the launch of Israel’s ground offensive against Hamas in Gaza last Thursday night to 25.

The toll is greater than the number of soldiers who died in the two previous major Israeli efforts to thwart Hamas terrorism in 2008-2009 and 2012.

May Hashem avenge their blood, and may their deaths not be in vain.

It is notable that 3 of the 20 soldiers killed so far have been lone soldiers, boys who made aliya alone and served in the IDF while their families remained abroad:

The Michael Levin Lone Soldier Center expresses its condolences on Facebook for Jordan Bensemhoun, who was killed in Gaza fighting early Monday.

“Jordan came here alone, to do his part to defend all of us and keep all Israeli safe and free,” the center writes.

Bensemhoun is the third lone soldier killed in the last two days of fighting. On Sunday, Nissim Sean Carmelli and Max Steinberg, both originally from the US, were killed during fighting in the Strip.

The Lone Soldier Center, in Ra’anana, is named for Michael Levin, a lone soldier from the US killed in the Second Lebanon War in 2006.

Over 12,000 people turned out for the funeral of Nissim Sean Carmeli tonight in Haifa:

More than 12,000 people have showed up at the military cemetery in Haifa’s Neve David neighborhood for the funeral of slain lone soldier Nissim Sean Carmeli.

Earlier on Monday, fans of the Maccabi Haifa team posted on Facebook calling for people to attend Carmeli’s funeral.

What a wonderful spirit of solidarity! If only this could have been in happier times.

Four of the seven were killed by a rocket-propelled grenade, fired by Hamas gunmen who emerged from a tunnel dug from Gaza into Israel near Kibbutz Nir Am. The Hamas cell, clad in IDF uniforms, emerged from the tunnel, and waited for an approaching IDF jeep before opening fire, killing the IDF officer and the three other soldiers in the vehicle. 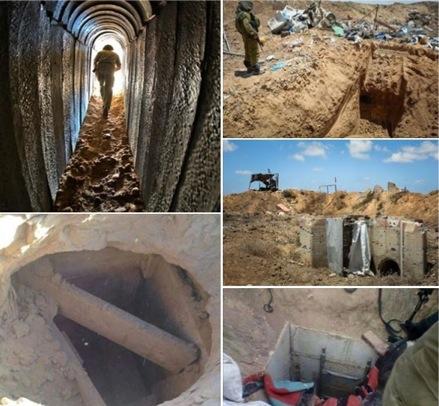 The jeep had been sent to the scene as information on the infiltration was received.

Residents of Kibbutz Nir Am were told to stay in their homes while the IDF tackled the terrorist cell.

Troops from the Nahal Brigade converged and killed 10 of the Hamas gunmen. Two of the gunmen may have escaped back into Gaza.

Part of the incident was filmed in footage later released by the IDF.

“We paid a heavy price, but we averted a grave disaster,” said Sami Turgeman, the general in charge of the IDF’s Southern Command. “There is no Iron Dome protection against tunnel infiltration.”

The three other Israeli soldiers were killed in Shejaiya. Two were hit by an anti-tank missile fired into a building. Like the 13 IDF soldiers killed there overnight Saturday-Sunday, they were members of the Golani Brigade. The third may have been killed by IDF forces in error.

Watch this video of a tunnel being discovered by IDF troops under a Gaza residential house:

Just thinking about “what might have been” if those tunnels had not been detected is too chilling to contemplate. Were Hamas planning to use all those tunnels in one huge mega-attack, an Israeli 9/11?

The tunnel infiltration early Monday involved two groups of Hamas gunmen who surfaced shortly after six in the morning. Apart from the terror cell that emerged near Nir Am, the second cell, also clad in what looked like standard IDF military gear, emerged near Erez, on Israeli territory, several kilometers northeast of the Gaza city of Beit Hanoun. Surveillance soldiers spotted the infiltrators and summoned an aircraft to the area, the army said. The aircraft opened fire, killing the gunmen. No Israelis were hurt in the battle.

The squad that surfaced near Nir Am emerged from either a separate tunnel or a more southeasterly branch of the same one and was not immediately detected.

Army spokesman Brig. Gen. Moti Almoz told Israel Radio that the army believed the tunnel squads sought either to enter a civilian community or to attack a significant army post, with the ultimate aim of abducting a soldier or a civilian.

Earlier Monday, in the Shejaiya neighborhood of Gaza City, forces from the Egoz unit engaged and killed 10 operatives, including one who detonated a suicide vest.

There were conflicting reports about the sex of the suicide bomber, but later reports said it was a woman.

Lerner, in depicting the pitch of the battles in Shejaiya, where dozens of Palestinians and 13 Israeli soldiers were killed Sunday, said that the combat there is “reminiscent of ‘Black Hawk Down,’ ” the film [and book] describing the 1993 battles in Mogadishu, Somalia. In other news today, there are reports that the IAF struck a Sudanese arms arsenal, storing weapons for Hamas:

>Sources in Khartoum claimed on Monday that Israeli forces struck a weapons arsenal which held long range missiles for Hamas.

The Arabic-language UK-based newspaper Al-Arab reported that the government in Sudan is not confirming the incident in order to cover up relations with the terrorist organization in Gaza. Such ties could entangle the country’s president Omar al-Bashir with an accusation of supporting terrorism from the US and Western nations.

The attack came only hours after Israel accused the Sudanese government of storing long range missiles for Hamas.

Eye witnesses claimed to have seen a “huge explosion” and billows of smoke before ambulances and firefighters arrived at the scene. Six people were allegedly wounded in the attack.

House in Sderot after direct hit from rocket

The Times of Israel live-blog reports on heavy fighting in Gaza with Palestinian casualties mounting to over 500; heavy rocket fire in the south including a direct hit on a house in Ashkelon and a near-miss in Sderot, rocket launchers found near a school (again), anti-tank missiles stored next to a hospital, and renewed attempts by the UN and the US at a ceasefire (because we’re winning).

Luckily for us Hamas deny all knowledge of a ceasefire.

Meanwhile communities surrounding the Gaza border are in lockdown for the 3rd time today for fear of an infiltration by terrorists.  The residents have to contend with these dangers as well as the incessant heavy rocket fire pounding on them for years.

In a very surprising undiplomatic (but correct) remark, former Israeli Ambassador to the US, Michael Oren, decried the arrival of John Kerry:

Michael Oren, who until recently served as Israel’s ambassador to the US, says Kerry is coming to the region despite not being invited.

He says Kerry and the Obama administration have close ties with Qatar and Turkey, “who are not on the best terms with Egypt right now.”

Oren stresses that Kerry, as evidenced by his on-camera slip yesterday, was “not invited” to come out here. He decided that that’s what he wanted to do.

Oren’s comments follow remarks yesterday by Channel 2′s veteran Arab affairs analyst Ehud Ya’ari, who said flatly that Kerry’s trip was “bad for Israel” and that the US should be leaving it to Egypt to handle ceasefire efforts.

PM BInyamin Netanyahu talks to the press on Sunday night

Talking of politics, PM Binyamin Netanyahu spoke to the press on Sunday night and answered their questions. Here are Rapahel Ahren’s summary:

1. The operation has become a war. Until Sunday, the Israeli government was hesitant to refer to Operation Protective Edge as a war.

But on a day on which more than a dozen Israeli soldiers fell in enemy territory, Netanyahu was no longer stating that this was anything but a full-fledged war. “I would like to say to you that there is no war more just than that in which your sons and ours heroically fell,” the prime minister said, addressing the bereaved families.

2. It’s an existential war. The current campaign should not be seen as an imperialistic endeavor or an adventure to turn tyrannies into democracies, Netanyahu said. Unlike other nations who send their armies to fight in far-flung provinces, Israel is fighting for its very survival in its ancient homeland. The 13 soldiers from the Golani Brigade died “so that we can continue to live here,” he said. “We find ourselves in a milhama al habayit – a war for our home…

3. The war’s objective is loosely defined. Before he became prime minister, Netanyahu said that once he was in charge, the IDF would not refrain from finishing the job in Gaza — in other words, toppling Hamas. But now, in the middle of an expansive military campaign, with troops on the ground in Gaza, removing Hamas from power was not on his list of objectives.

Rather, the prime minister steadfastly defined the operation’s aims as restoring quiet to Israel for a prolonged time and severely damaging terrorist infrastructure in Gaza.

Netanyahu has formulated his goal in so amorphous a way as to enable him to stop the operation whenever he sees fit.

4. Abbas’s role. Palestinian Authority President Mahmoud Abbas could be part of the solution to the conflict, Netanyahu said — provided Abbas understands that Hamas cannot be part of the peace process. […] Now that even many parts of the Arab world see Hamas for what it is – a terrorist organization that, by refusing the Egyptian ceasefire proposal, proved that it doesn’t care about the lives of Palestinians – Netanyahu feels vindicated.

5. Relations with Turkey. Ties between Ankara and Jerusalem have hit rock bottom. In May, it seemed that the four-year-old feud between the two countries was about to end.

But after Turkish Prime Minister Recep Tayyip Erdogan’s recent rants, during one of which he accused Israel of “barbarism that surpasses Hitler,” chances for a rapprochement have been reduced to close to zero. […] “This is something that you would expect to hear from Iran or from Al-Qaida,” Netanyahu said.

6. Questions don’t hurt. Finally, a point that might seem mundane in times of war, but which is not entirely unimportant for a country that considers itself an exemplary democracy: the prime minister seems to have understood that Israeli journalists don’t bite, or at least not always. Netanyahu gives plenty of interviews to the foreign media, but very rarely fields questions from local journalists.

On Sunday, the prime minister took questions from the press, for the second time since the current operation started. And lo and behold, the Q&A format seemed to work just fine. His answers were considered to the point and and shed additional light on his thinking on various geopolitical issues.

“The press conference was excellent,” Israel Radio’s diplomatic commentator Chico Menashe opined afterwards. “If you’re not afraid of the media, you succeed.” Even political blogger Tal Schneider, one of Netanyahu’s harshest critics when it comes to his disinclination to answer questions, was full of praise, noting that he was “focused and precise” and didn’t dodge the issues.

It makes a pleasant change to have the lefty Israeli press on-side with the Prime Minister. Let us hope that this solidarity will continue to hold strong throughout this war and on into the future.

May Hashem protect our soldiers and watch over them, and may He protect all of Israel. May tomorrow bring better news.