Last week I couldn’t bring myself to post a Good News Friday installment. The news seemed to be unrelentingly bad and I couldn’t shake myself out of my depression.

Another terrible week has gone by with heavy losses by the IDF and devastation for those soldiers families. There have been incessant heavy rocket barrages throughout the country but particularly on the south, and people have been injured and property damaged (though you wouldn’t know it outside of Israel).

Nevertheless I feel the need to bring some bright points of light to you before Shabbat, so this is going to be a Good News Friday with a difference, more of an emphasis on the war and surrounding issues.

My first item is the wonderful news that a plane-load of immigrants, this time from the US, arrived on Aliya this week, undeterred by the war:

Despite the tense security situation in Israel, 228 new Olim from the United States and Canada arrived at Tel Aviv’s Ben Gurion Airport on Tuesday, July 22, on a Nefesh B’Nefesh Aliyah charter flight to Israel. Of these Olim, a remarkable 100 are children who made Aliyah with their parents.

The children include 39 girls and 61 boys. Altogether, 29 families and 54 singles will be on this landmark flight, which took place in collaboration with the Ministry of Aliyah and Immigrant Absorption, the Jewish Agency for Israel, Keren Kayemeth LeIsrael and JNF-USA.

Due to the complicated security situation in Israel, Nefesh B’Nefesh is reaching out to the Olim, briefing them, and providing counseling and support. As they arrived at John F. Kennedy International Airport in New York, each Oleh received a special booklet by the Ministry of Aliyah and Immigrant Absorption on security measures, such as what to do when a Code Red siren sounds warning of incoming rockets. The Olim were also provided with an English-language manual from the Home Front Command on how to talk to your children about the situation, translated by Nefesh B’Nefesh.

Dozens of these Olim are planning to live in Israel’s south and north, as part of a joint project to settle Olim in the Negev and the Galilee. Those who are planning to live in the south also received special briefings about the security situation, such as information about trauma counseling and support from English-speaking Olim living in the south.

I stand in absolute awe and admiration for these Olim. Unlike the French olim from last week, they are not running from antisemitism. In fact they are leaving comfortable lives and a serene environment for a war zone. Kol hakavod seems much too mild a word. We are indeed blessed to have such brave wonderful people join our nation.

Here’s a picture that needs no words (from Mike Cohen’s twitter feed): 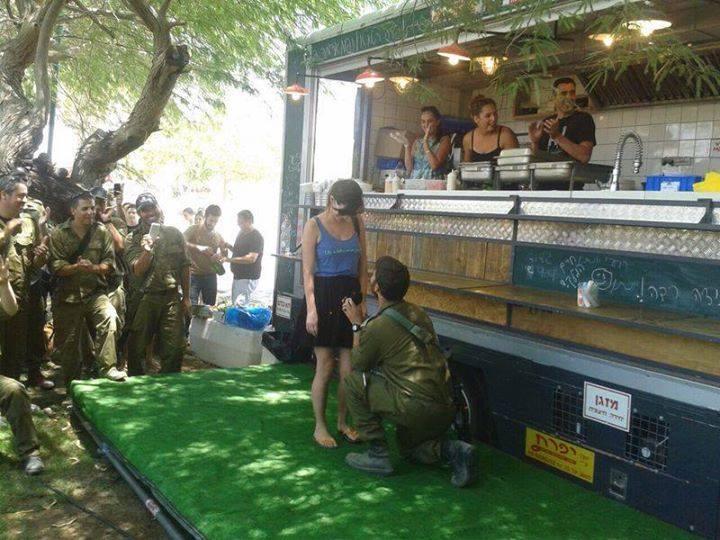 A wonderful little item from the Muqata’s facebook page:

Moshe Yaalon writes a letter in the Sefer Torah

Kol hakavod to Moshe Yaalon and to Chabad. May this Sefer Torah help protect the soldiers of Israel and bring them home safely.

Some news from the front now – but not quite the news you might have been expecting:

The invaluable Muqata, on his blog this time, brings us a wonderful letter from a soldier at the front:

From a Solider at the Front. Original in Hebrew….translated into English with a few comments from me. Having been down there a few times, I can personally vouch for the accuracy of this letter. On a personal note, before going down South last night for a pizza delivery to IDF soldiers, my daughter gave me a stack of letters and pictures from children in our community to distribute to the delivery. After giving the soldiers 60 pies, I said, “Wait, I have to give you the letters from the kids…” A soldier stopped everything and said — “THOSE are the most important…much more than the pizza…and hugged a pile of letters that I gave him.”

On the Life in Israel site I found a picture illustrating this attitude exactly. The soldiers stuck the children’s letters to their tank before entering Gaza!

these soldiers took the letters and pictures received from children around the country, and decorated their tank (armored vehicle?) with them!

Jameel at the Muqata continues the soldier’s letter:

What’s happening here in the staging area [area where soldiers prepare to enter Gaza] is beyond comprehension, not rationally, not emotionally and beggars the imagination.

Almost every hour a car shows up overflowing with food, snacks, cold drinks, socks, underwear, undershirts, hygiene supplies, wipes, cigarettes, backgammon and more. They’re coming from the North and the Center, from manufacturers, from companies and private businesses, from prisons, Chareidim and Settlers, from Tel Aviv and even Saviyon.

Every intersection on they way down here we get stopped, not by the police, but be residents giving out food. What is amazing is that the entire situation wasn’t organized and everyone is coming on their own without coordination between the folks coming.

They’re writing letters and blessings, how they’re thinking of us all the time. There are those who spent hours making sandwiches, so they’re as perfect and comforting as possible.

Of course representatives of Chabad are here to help soldiers put on Tefillin and distributing Cha’Ta’Ts (Chumash, Tehillim, Tanya) for every troop transport and Breslov are showing up to the border and dancing with the soldiers with great joy.

The Chareidim are coming from their yeshivot to ask the names of the soldiers with their mothers’ names so that the whole yeshiva can pray for them. It should be mentioned that all of this is done under the threat of the terrorist tunnels and rockets in the area.

Soroka Hospital (in Be’er Sheva) today looks like a 5 star hotel. A wounded friend who was recently discharged told us how the MasterChef truck is parked outside and is preparing food for the wounded.

Read the whole amazing letter. It brought a smile to my face and tears of emotion to my eyes. We really can say מי כעמך ישראל – “who is like Your people Israel!?”.  Thank G-d for all those wonderful people who are going out of their way to keep up the morale of the soldiers at the front.

Naftali Bennett saves the day again for Israel for his excellent rebuttal of accusations of targeting civilians on Sky News:

And speaking of videos, here are two fantastic videos of worldwide support for Israel. The first is from … Egypt! As the Elder of Ziyon says, this man has guts. I hope he keeps safe.

A young Israel man had a similar idea and asked his friends around the world to show their support for Israel. Here’s his heart-warming video:

With all these wonderful items, I hope I’ve put you all in a better mood for Shabbat.

Wishing you all a quiet, peaceful and safe Shabbat. Shabbat Shalom everyone.

May Hashem protect all the soldiers of Israel and bring them home safely. May He watch over all of us.