Posted on 7 November 2014 by anneinpt

With all the tragic events of this past week, this week’s Good News Friday post is going to concentrate more on good news from the  political front. 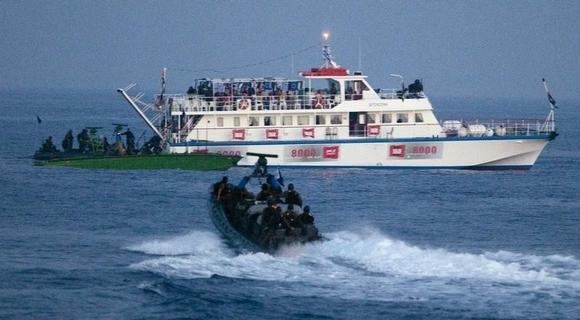 Israeli forces approach one of six ships bound for Gaza in the Mediterranean Sea May 31, 2010. | Credit: Reuters/Uriel Sinai/Pool

First we have the quite astonishing news that the ICC rejected a petition to investigate the IDF for “war crimes” during the Mavi Marmara flotilla fiasco (via Honest Reporting). While it’s not a complete bill of health from the ICC (they are sure that war crimes were committed by the IDF but they cannot prove it – what a ridiculous assertion –  or they were not bad enough – an even more absurd claim) it’s an excellent morale-boost for Israel’s defenders:

(Reuters) – International prosecutors believe Israeli soldiers may have committed war crimes during a raid that killed nine Turkish activists in 2010, but have decided the case is beyond their remit, according to court papers seen by Reuters.

The move by lawyers at the International Criminal Court is likely to enrage Ankara which accused its erstwhile ally Israel of mass murder after the commandos abseiled onto a flotilla challenging an Israeli naval blockade of the Gaza Strip.

But the lawyers decided the crimes in question were not of sufficient gravity to fall under the court’s jurisdiction, the papers added.

Prosecutors added they had reached these conclusions on the basis of publicly available information.

I’m happily surprised that the ICC managed to come to the correct decision even if they arrived at it by a roundabout way and with the obligatory stab at Israel.  My favourite part is the shot of schadenfreude the report has given us, as the article states:

The move by lawyers at the International Criminal Court is likely to enrage Ankara which accused its erstwhile ally Israel of mass murder after the commandos abseiled onto a flotilla challenging an Israeli naval blockade of the Gaza Strip.

Long may they be enraged.

On a similar theme, the US Chairman of the Joint Chiefs of Staff, General Martin Dempsey stated that Israel went to extraordinary lengths to avoid civilian casualties in Gaza:

Dempsey acknowledged recent reports criticizing civilian deaths during the 50-day Gaza war this year but told an audience in New York he thought the Israel Defense Forces “did what they could” to avoid civilian casualties.

Dempsey was asked about the ethical implications of Israel’s handling of the Gaza war, during an appearance in New York at the Carnegie Council for Ethics in International Affairs.

“I actually do think that Israel went to extraordinary lengths to limit collateral damage and civilian casualties,” Dempsey told the group, according to Reuters.

“In this kind of conflict, where you are held to a standard that your enemy is not held to, you’re going to be criticized for civilian casualties,” he added.

Dempsey said Hamas had turned Gaza into “very nearly a subterranean society” with tunneling throughout the coastal enclave.

In fact the Americans were so impressed with the IDF’s efforts that they sent a delegation here recently to learn the IDF’s methods:

Dempsey said the Pentagon three months ago sent a “lessons-learned team” of senior officers and non-commissioned officers to work with the IDF to see what could be learned from the Gaza operation, “to include the measures they took to prevent civilian casualties and what they did with tunneling.”

The general said civilian casualties during the conflict were “tragic, but I think the IDF did what they could” to avoid them.

“The IDF is not interested in creating civilian casualties. They’re interested in stopping the shooting of rockets and missiles out of the Gaza Strip and into Israel,” Dempsey stressed.

So much for John Kerry’s infamously snide remark about the IDF’s operation in Shujaya, when he calling it “one hell of a pinpoint operation“.

This is all in marked contrast to the totally biased report from Amnesty:

Earlier this week, the London-based Amnesty International released a report in which it claimed the IDF showed “shocking disregard” for civilians during the Gaza war.

Don’t spend too long on the Amnesty report. This is supposed to be a good news post.

Kol hakavod to General Dempsey for stating the truth openly and clearly in such a public forum. It’s about time that someone stood up not for Israel, but for the truth, clearing away the political-correctness and the outright propaganda.

The very big good news of the week was that the Republicans took over both houses of Congress and several governorships in the US mid-term elections. You can read all about it at the Legal Insurrection link.  This is great news for Israel although we are not completely out of the woods yet, and won’t be until the next presidential elections in 2016.

To conclude this week’s post, some local news: Caroline Glick’s Latma TV show is back! It will be returning in February:

…Until now, political satire programming on Israeli TV has pretty much only been left-wing satire targeting the right and the religious.

It only took a major reform in Israeli broadcasting by Communications Minister Gilad Erdan, the closing of the Israel Broadcasting Agency (IBA), and Knesset Sports and Culture subcommittee discussions to finally get a non-left-wing satire show on the air.

We look forward to seeing it again.

So do we. The Israeli media is almost as bad as anything outside fo Israel: it is nearly always slanted to the left, in particular its satirical shows. It is far beyond time that a full half of the population is represented on TV too.

Kol hakavod to the IBA, to Minister Erdan and above all to Caroline Glick for creating the brilliant show and for tirelessly pushing the IBA until they consented.

Since I made mention of the Mavi Marmara at the top of this post, here’s the video of Latma’s brilliant “we con the world” song. Enjoy!