Anti-Israel media bias, which I try to document as much as possible on this blog, goes hand in hand with Arab and Muslim incitement against Jews and against Israel to create the “perfect storm” which enables terrorist attacks like that which was carried out in the Bnei Torah synagogue in Jerusalem yesterday.

The bias in the media reporting on yesterday’s attack was quite breathtaking in its scope and in its stupidity. Here are just a few examples:

The Canadian CBC’s quite incredible headline (which was later amended): 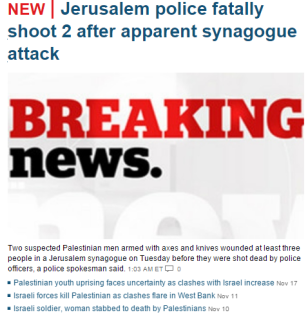 Via Tom Gross Media, CNN’s coverage was execrable, first reporting that the attack was on a mosque (can you imagine the world’s reaction if that was the truth?) and then coming up with a headline that distorted the entire story: 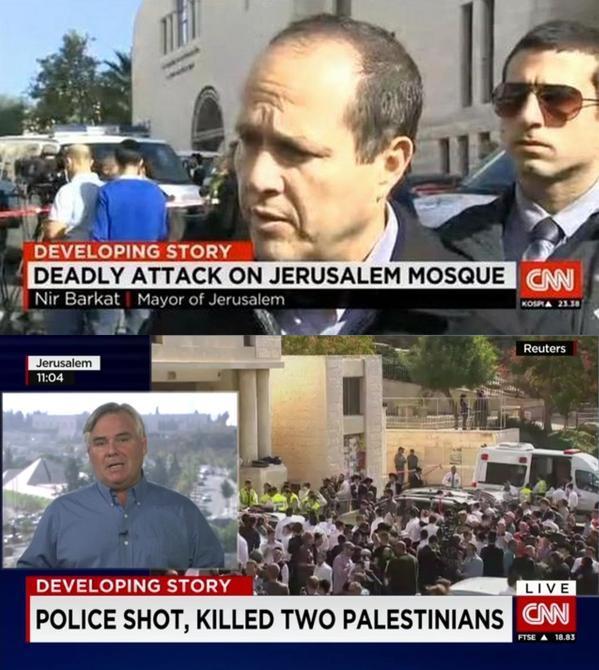 CNN’s idiotic, or maybe malicious, headlines, corrected but not improved

The New York Times, too, is displaying its usual skittishness about headlines clearly stating Palestinians carried out violence.

Perhaps maybe the roof caved in due to a structural flaw? Or maybe there was a gas leak? The casual reader who only skims headlines is missing the two critical elements a headline is supposed to convey: who (Palestinians) and what (killed).

CiF Watch accused the Guardian for similarly erasing the word “Palestinians” from their Reuters story on the attack:

However, as you can see, the Guardian’s version (Deadly attack in Jerusalem synagogue) deleted the word “Palestinian” from the headline.

But, that’s not the only revision to the Reuters article by Guardian editors.

Here’s the opening passage of the original Reuters report:

(Reuters) – Two suspected Palestinian men armed with axes and knives killed up to five people and wounded four in a Jerusalem synagogue on Tuesday before they were shot dead by police, Israeli media said, the worst such attack in years.

Two men armed with axes and knives killed up to five people and wounded four in a Jerusalem synagogue on Tuesday before they were shot dead by police, Israeli media said after the worst such attack in years.

BBC Watch has a summary of the BBC’s tendentious reporting on the story, including this headline which is almost a direct copy of the NYT headline:

Coverage began with typical BBC refusal to independently categorise the premeditated murders of civilians going about their daily business as terrorism.

In the first four versions of the website’s main article on the incident – currently titled “Jerusalem synagogue: Palestinians kill Israeli worshippers” – the term terrorist attack was placed in the quotation marks routinely employed by the BBC to distance itself from the description.

In subsequent versions of the article – of which there were twenty-one in all – the word terror and its derivatives also appeared exclusively in the form of quotes; for example:

“US Secretary of State John Kerry said the act of “pure terror… simply has no place in human behaviour”. He called on the Palestinian leadership to condemn it.”

The information concerning Hamas’ praise for the attack was removed from later versions.

“Hamas said it was in revenge for the death of a Palestinian bus driver found hanged inside a vehicle in Jerusalem on Monday.”

The BBC did not make any effort to inform audiences that the verdict of suicide was in fact not given by “Israeli police” but by pathologists who conducted a post-mortem, including one chosen by the deceased’s family.

The article goes on to explain the how the BBC distorts the entire background to the latest violence in Jerusalem. They swallow the Hamas line whole and then regurgitate out for their gullible public. Read it all.

I myself watched BBC World’s report on Israeli cable TV yesterday on Impact Asia. At first I was pleasantly surprised by their neutral report on the synagogue attack.

They then broadcast a statement by Naftali Bennett and one by Abu Mazen (Mahmoud Abbas) where he condemned the attack in such faint words it was almost praise. I’m afraid I didn’t catch the name of the female news anchor. She then interviewed a Palestinian representative and Mark Regev. She let the Palestinian (sorry, I missed his name and I was getting steamed at the bias) talk without pause for a minute or two. He “condemned” the attack “but” settlements, occupation, Jews “storming” the Temple Mount … etc.

Then Israeli spokesman Mark Regev was interviewed for Israel, but here the anchor constantly interrupted him and contradicted him. I almost smashed the TV set in. She countered his words that Abbas hadn’t condemned the attack properly by insisting that he had, despite the fact that Abbas had been shown on their own program just minutes earlier. She also contradicted Regev’s words about innocent civilians being killed with “what about the 600 children killed in Gaza this summer?”. Regev gave as good as he got, explaining that civilians killed in war time in urban combat is a completely different matter (besides the questionable methods of counting casualties) to a deliberate terrorist attack on the synagogue. But the anchor cut Regev short again and terminated the interview.

I’m sure you have all seen similar examples of such distortions and anti-Israel bias in your local media. Don’t let them get away with it. Challenge them and provide them and their readers with the correct facts, using my sources here or others.

The Economist refers to Jews who want to visit the Temple Mount as “militants”. When this term is also applied to terrorists, you can see where this leads:

An article published on Nov. 17th titled ‘The trouble at the Mount‘ included the following passage:

THE Temple Mount in Jerusalem is one of the world’s most explosive bits of real-estate. It has started to rumble again in recent weeks, with demands by Jewish militants to extend prayer rights, riots by Palestinians and the killing of several Israelis in knife or car-ramming attacks.

1.  A Jew who wishes to extend prayer rights to Jews at the Temple Mount, Judaism’s holiest site.

2.  A Jew who insidiously engages in Jewish prayer at the Judaism’s holiest site while “pretending to speak into mobile phones”.

3.  A Jew who – as part of a “privately financed” group – buys a home in a previously non-Jewish neighborhood in Jerusalem.

But this is child’s play compared to by Baroness Sayeeda Warsi’s indefensible equivalence of Jews praying on the Temple Mount to the terrorist attack on the Jerusalem synagogue:

Baroness Sayeeda Warsi was Minister of State for Faith and Communities, until her resignation after disagreeing with David Cameron’s position on the war in Gaza, a policy she described as “morally indefensible” in its support for Israel.

The row over her resignation was widely (and quitesympathetically) covered by the Guardian.

Here’s Warsi’s Tweet this morning in response to today’s terror attack, in which Palestinian terrorists massacred Jewish worshippers at a synagogue in Jerusalem.

In addition to the morally indefensible equivalence she imputes, the first line of Warsi’s tweet was the kind of shamefully dishonest agitprop you’d expect to see at Electronic Intifada.  Israeli extremists have not of course “stormed the mosque”, nor “intimidated” Muslim worshippers – unless you consider the wish to peacefully recite Jewish prayers to be a form of “intimidation”.

Just about all the violence at the Temple Mount in recent memory has been instigated by Muslim extremists, targeting Israeli police and Jewish worshippers.

There are so many more examples of the outrageous bias and slanting of the news reports on the terror attack, together with examples of equivalences of terrorism to Jewish activism, and just common-or-garden antisemitic incitement.

Israellycool has a series of articles which make exceedingly depressing reading:

The terrorists’ families celebrated their “martyrdom” and handed out sweets, along with their pals in in Gaza

This is all besides the inciteful cartoons that I mentioned in my previous posts.

World reaction to the massacre also plays a big part in the prevention (or encouragement) of future attacks. Interestingly one of the only full-throated condemnations of the attack and blaming the Palestinians alone came from John Kerry, as can be seen in this video (via Israellycool):

One last word on this never-ending subject, from Tom Gross’ article which I mentioned above: (my emphases):

As Bret Stephens once wrote about the New York Times When one carefully examines the New York Times’s corrections column, one can see that in all cases the mistakes were made against Israel. “In a more normal world,” wrote Stephens, “a newspaper’s mistakes, particularly in its political and diplomatic reporting, would more-or-less be randomly distributed… Yet while a search of NYT corrections over the past two years discloses the usual measure of forgivable bloopers, not once has the paper erred on the side of Israel. A pattern of bias, maybe?”

Tom Gross’ words can be applied to almost every single international outlet. They must be held to account and not allowed to equivocate. Our lives literally depend on this.