Posted on 3 February 2015 by anneinpt

A new survey in Britain has shown that Britons hate Israel more than Iran, in fact almost more than any other country:

Britons feel more “unfavorable” to Israel than any other country worldwide except North Korea, a survey found.

The survey — taken in August and published Thursday by Chatham House, the Royal Institute of International Affairs — showed a massive surge in negative attitudes toward Israel since the previous such study, two years earlier. Thirty-five percent of Britons said they “feel especially unfavorable towards” Israel in the 2014 survey, compared to 17% in 2012.

Commenting on the dramatic rise in hostile attitudes to Israel, the compilers noted that, “The survey was conducted in August 2014 at a time when … Israel was engaged in a military operation in Gaza against Hamas that caused large numbers of civilian casualties.” 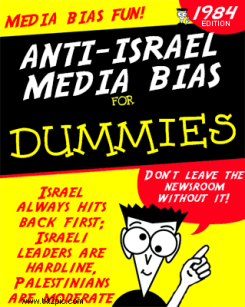 The immediate question that the comes to mind on seeing the results of this survey and previous ones is how much of a role did the viciously anti-Israel reporting of the British media during Operation Protective Edge play in influencing people’s attitudes towards Israel? It would be interesting to see the results of a new survey during a period of relative calm in the Middle East.

In other words, it’s a chicken-and-egg situation. Does anti-Israel media bias cause anti-Israel feelings? Or do the media suffer from the same anti-Israel attitudes as the rest of the population and they are just expressing their sentiments?

I don’t know if there’s an answer to that, but certainly there no shortage of bias in the media, as I have documented often on this blog.   But it’s not “only” anti-Israel bias that is prevalent. We see good old-fashioned anti-Semitism too. Here is an eye-opening article by Rabbi Y. Y. Goldstein who used to work for the BBC. He published his article in Mishpacha Magazine, but the article itself is not online yet. Someone posted a picture of the article on Twitter:

Excellent article by Rabbi @yyrubinstein detailing his time working @ the BBC & the inherent Jewish problem they have pic.twitter.com/Wiz17V8zE4

The Biased-BBC blog helpfully transcribed the article for us. Here are some excerpts from The BBC has a Jewish problem:

The question of whether the BBC suffers from institutional anti-semitism is not a new one.

Historically, there is not the slightest doubt that it has been guilty in this regard. In fact the BBC (the British Broadcasting Corporation) admitted it when radio 4, a BBC radio station aired a documentary years ago about the corporations’s role in promoting anti-Semitism in  World War ll. It found itself clearly having suffered from “the world’s oldest hatred.”

It is not so willing today, however, to confront the question with nearly the same honesty. Rather, the BBC has resisted, with every trick it can muster, revealing the contents of its own commissioned report, completed on 2004 that judged whether the broadcaster fairly reports on the Israel-Palestine conflict.

I have worked at the BBC as a freelance contributor for over 20 years. Apart from former Chief rabbi Jonathan sacks, I was the only Orthodox rabbi regularly appearing on numerous shows.

But the lingering suspicion that the old sickness of anti-Semitism still pervaded the place was never quite laid to rest.

Then there was the Tony Blair’s first ever UK National Holocaust day in 2001.

I was part of the team putting together the BBC’s main documentary to mark the day. I sat with the team in the editing suite – translating the classic Jewish memorial prayer for the dead into English. My translation would run underneath the footage of the synagogue cantor singing it. A problem arose when I translated the word “Israel” as “Israel”. Consternation and debate erupted in the studio. This was simply an unacceptable translation.

I explained that the prayer was a thousand years old. It did not refer to the modern State of Israel, but the ancient People of Israel (like me).

It didn’t help. Arguments broke out, fear of offending Muslims was cited, and six very sincere BBC colleagues – good, kind and hugely talented – looked on the verge of a breakdown. I suggested that perhaps we could change the word to “Yisrael”(which is of course how you actually say it in Hebrew and how the cantor sang it) and everyone gave a collective sigh of relief.

A less funny incident occurred when one of my producers (whom I had worked with very closely for many years and whom I would call a friend) had a “Tim Willcox moment” the morning after 9/11.

Her son who was working in a building in New York next to the Twin Towers had been missing for a day. In the canteen, my colleague burst out very loudly “It serves the Americans right. They have been arming ‘the Jews’ for decades.” Not Israelis or Zionists you will note: “The Jews.”

These hard-hitting words from an insider only reinforce our well-founded suspicions that the BBC is inherently not only anti-Israel but anti-Semitic.

Another major news outlet which never relents in its anti-Israel bias is the New York Times. They have been very exercised over Binyamin Netanyahu’s upcoming controversial visit to Washington to address Congress over the Iran issue. The NYT did its best to fan the flames of anger against Netanyahu, to the extent that they altered the timeline of events in order to show Israel in a bad light. When they were caught out, they issued a correction – but only in the small print and only online.

Lie about @netanyahu and then apologise in the small print. pic.twitter.com/8lvJ9klX96"

Breitbart appears to be one of the only news outlets to pick up on the NYT’s inflammatory headline and minuscule correction:

The New York Times has continued its apparent bias against Israeli Prime Minister with a story Friday wrongly alleging that Israeli Prime Minister Benjamin Netanyahu accepted Speaker of the House John Boehner’s invitation to address Congress before President Barack Obama’s was notified. In fact, Netanyahu only accepted after the White House knew about the speech. The story has since been corrected online, but the incorrect version will misinform print readers today.

…The mistake is significant. The claim that Netanyahu accepted Boehner’s invitation before the White House knew about the speech is central to the “behind Obama’s back” meme that has informed much commentary on the topic.

As I have written many times on this blog, the New York Times has “form” in their anti-Israelism and even anti-Semitism. CAMERA provides us with another recent instance of their ambivalent (to put it mildly) attitude towards terror victims if those victims are Jews:

In particular, besides its Jewish problem the paper has also developed a related malady, a terrorism problem, especially when the terrorists target Israeli Jews.

Consider, for example, the terrorist attack a few days ago in Tel Aviv, in which a Palestinian assailant stabbed 12 Israelis, at least three of whom were critically wounded. The terrorist would have stabbed and possibly killed even more innocent people, but he was shot and wounded by an armed Israeli corrections officer who, by chance, happened to be in the vicinity.

Did the New York Times do a story humanizing the victims, speaking with their families, or even giving their names and ages?

No, that’s not what the Times did. Instead, the Times reserved that humanization for the terrorist – Opening His Mother’s Clothing Shop, and Then Heading to Tel Aviv for a Rampage (Jan. 23, 2015).

Readers of Isabel Kershner’s story learned all about the terrorist, Hama Matrouk – about his electrical studies in which he had just received a diploma, that he’s quiet and introspective, pious but not an extremist, …

… And what of the victims of Hama Matrouk? How are their apartments furnished, what did they study in school, how are they and their families and friends reacting to this vicious and bloody terrorist attack? Were any of them “pious?”

The Times is even against those in Israel who fight against terrorism via legal means, by suing terrorists and their funders, leaders and enablers. Witness the “Saturday Profile” Crusading for Israel in a Way Some Say Is Misguided (Jan. 24, 2015), largely a hit piece on the Israel Law Center, and its founder and leader, Nitsana Darshan-Leitner.

While there is brief mention in the piece of a lawsuit initiated by Darshan-Leitner that just opened in Federal Court in New York, pitting victims of terror against the PLO and the Palestinian Authority, it’s restricted to a single paragraph, with no indication whatsoever of its great importance.

For that, one would have to turn to other sources, such as the AP, whose stories are typically picked up by hundreds of newspapers, even including – in this case – Israel’s Haaretz newspaper, where one could learn that this case might well turn out to be Darshan-Leitner’s most significant victory:
…

Finally, it is notable that Rudoren quotes unidentified critics denigrating the Israel Law Center’s efforts as “lawfare,” which she defines as “abusing the courts to score political points.”

But contrary to the Times, lawfare is exactly what Israel has been subject to for years, at the UN, at the World Court, and perhaps now at the ICC – see for example, NGO-Monitor’s extensive analysis of the phenomena, which began at the Durban Conference in 2001.

However, according to a Nexis search the Times has never used the word “lawfare” to describe this very well-funded effort to demonize and delegitimize Israel. Instead, Rudoren applies it to an Israeli attorney using the courts for the very purpose that they were created – to achieve justice by holding people accountable for their actions.

This subject of media bias is never-ending and I’m unfortunately certain that i will be writing again about anti-Israel media bias many more times into the future.

All that we can do as readers and occasional media-monitors is not to let the editors and correspondents get away with it. Hold them to account, write to the editors and even to their advertisers if necessary.  Send in petitions, and embarrass them publicly on their Facebook pages and Twitter accounts until they correct their lies.

As we have seen in the horrific events in Paris and elsewhere, words DO have an effect, for the bad as well as for the good.  We must do our utmost to make sure the truth is out there.

8 Responses to Which came first? Media bias or anti-Israel sentiments?