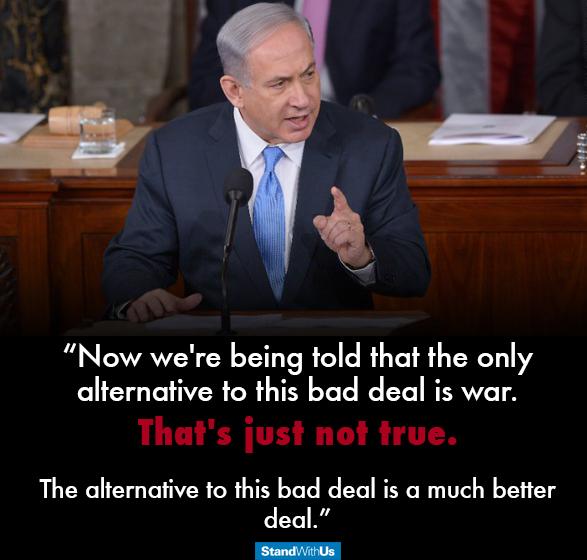 Well, it was a zinger of a speech and PM Binyamin Netanyahu delivered it with more than his usual aplomb. He spoke with eloquence, passion and urgency.  I was pleasantly surprised that the speech wasn’t just a tirade or a warning against the bad deal being hatched by President Obama between the p5+1 (or maybe just the US) and Iran, but it also contained a solution of sorts; at the very least a practical suggestion – to increase sanctions on Iran until they completely cease their enrichment program. Sanctions are what brought Iran to the table in the first place; sanctions are what will continue to exert pressure on them. There is simply no sense in easing the pressure on them at this stage.

It was gratifying to note that Netanyahu received dozens of standing ovations – over 40 by some counts (I lost count myself) – and these from both sides of Congress.

Some of the salient points that Netanyahu made:

Alternative to this bad deal is not war, but a much better deal. More ovations. #NetanyahuSpeech

The days when the Jews remained passive in the face of genocidal enemies are over. Standing ovation and cheers! #NetanyahuSpeech

Even if #Israel has to stand alone, Israel will stand! Standing ovation. But Israel is not alone. America stands with Israel. #Netanyahu

#Israel will not be called a warmonger. "We're told only alternative to this deal is war. NO! It's a much better deal." #NetanyahuSpeech

Below you can see my live-tweeting of the speech (scroll down for earlier tweets. The latest tweets are on the top).

David Horovitz in the Times of Israel talks about Netanyahu’s “devastating, irrevocable indictment of Obama” and reckons Bibi has burned his bridges with Obama:

In the event, Netanyahu did deliver the speech of his life… and caused devastating, presumably irrevocable damage to his relationship with President Barack Obama.

Although diplomatic in tone — and complete with deliberate Churchillian flourishes — “some change, some moderation,” he intoned of Iran under Hassan Rouhani — Netanyahu’s speech was in essence a devastating assault on Obama. He began, dutifully, with expressions of appreciation for the president, and for everything the president has done for Israel. But he continued, for the vast majority of his address, to explain the profound misjudgment of Iran — its ideology, its goals, and the immense danger it constitutes to Israel, the region, the United States, and the world — that lies at the heart of the “very bad deal” emerging from the US-led P5+1 negotiations. And thus, by extension, he was explaining the profound misjudgment of Iran at the core of Obama’s worldview and policies.

And the cardinal fact is that the prime minister is convinced, in his heart of hearts, that the Islamist regime in Tehran is bent on the destruction of Israel. Ayatollah Khamenei “tweets that Israel must be annihilated,” Netanyahu wailed, repeating: “He tweets! You know, in Iran, there isn’t exactly free Internet. But he tweets in English that Israel must be destroyed.”

Although a first, anonymous response to his speech from an unnamed White House official said that Netanyahu had offered “no concrete alternative” to the deal taking shape, and that his speech was “all rhetoric and no action,” and despite Obama’s subsequent elaborate defense of the US approach, the prime minister did offer an alternative. He urged the P5+1 to recalibrate, to reconsider, and then to push for a better deal. And “if Iran threatens to walk away from the table — and this often happens in a Persian bazaar — call their bluff,” he advised, the wise, wary Middle Easterner lecturing Obama and the other Western naifs. “They’ll be back, because they need the deal a lot more than you do.”

Keep those words in mind – that Netanyahu DID offer an alternative to the bad deal on the table at present.

After the speech Netanyahu met with the bipartisan leadership of Congress, stressing their support for Israel from both sides of Congress:

Shortly after his speech to Congress, Prime Minister Binyamin Netanyahu met on Tuesday with the bipartisan leadership of the Senate, pursuant to an invitation extended last week by Mitch McConnell (R-KY) and Harry Reid (D-NV).

At the start of the meeting Prime Minister Netanyahu said:

“I do want to thank the leadership of the Senate, Republicans and Democrats, both sides of the aisle, for inviting me here, giving me an opportunity to state Israel’s concern about an issue that could be the most important issue of our times. I believe it is.

“I was very moved by the attention and the responses to the speech from both sides of the aisle, and it’s very clear to me and it was clear in that hall to anyone who was there that the support for Israel is strongly bipartisan, that there is a very broad support of the American people and its representative for the Jewish state and I’m very, very grateful for that,” he added.

Prime Minister Netanyahu told the senators that the two new items in his address to Congress were the need to enact more vigorous restrictions in the agreement being formulated and thus lengthen the time it will take for Iran to break through to nuclear weapons. Also, in the agreement being formulated these restrictions must not be lifted automatically within a decade but only after Iran will have fulfilled three conditions: Stopping its support for global terrorism, stopping its aggression against its neighbors and stopping to threaten Israel’s annihilation.

Israellycool has a great Twitter timeline of the reactions (both good and bad) to Netanyahu’s speech. Here’s just a sampling:

Congress must unequivocally demonstrate to Israel's enemies that Israel has the support of the U.S. #NetanyahuSpeech http://t.co/S2UqQiNP90

Prime Minister @netanyahu's speech was powerful, persuasive and correct. We stop #Iran with a strong deal – a weak deal is a nightmare.

Obama’s reaction stands out in its ungraciousness and unstatesmanship: it was as pathetic as it was unsurprising in its juvenile peevishness:

Remember those words I quoted above? As David Horovitz repeated, Netanyahu did indeed offer some alternative – if only Obama was listening.

Obama’s behaviour, from his first angry objection to Netanyahu’s invitation to Washington, through his attempts to stymie the speech and then denouncing and decrying it while belittling and humiliating Netanyahu, through to this final pathetic reaction, stands in stark contrast to Netanyahu’s graciousness in acknowledging American support and his statesmanship in clearly stating the existential dangers facing Israel due to Obama’s very support for this deal with Iran.

Obama’s willingness to endanger not only Israel but the United States and the entire West is also highlighted by Netanyahu’s unabashed patriotism, his affection for his nation and his obligation to protect the citizens of his country.

Countering claims (particularly from the Israeli Left) that Netanyahu was merely electioneering, it can be claimed quite satisfactorily that in fact the speech was a huge risk for Netanyahu since it was not popular with the entire Israeli public for the very reasons the Left set out: that he was endangering ties with America and possibly leading us to war.  Therefore he was all the more courageous in going ahead with this speech since the existential threats to Israel are far worse than any possible electoral defeat.

In my humble opinion Israel can be proud of her Prime Minister today. I just hope his message fell on open and willing ears.

25 Responses to Netanyahu’s speech to Congress