Roots trip to Germany: Days 1 and 2

Our flight to Germany was uneventful (besides my almost getting lost in Frankfurt airport, but getting lost is nothing unusual for me…) and we were met at the airport by a pre-arranged taxi which took us to our hotel in Michelstadt.

From the air Germany is a beautiful country, green fields neatly laid out, glittering rivers and straight roads, even the forests seem orderly in the way the trees grow! As I admired the country from the air I felt guilty for even allowing a positive thought to enter my head about this country with the terrible history. And then I considered that so many other countries have a blood-soaked history with the Jews, and if it’s OK to entertain the thought of visiting Holland, France, Belgium, not to mention the former Soviet Union or the Baltic states, then why should Germany be any different, especially considering the efforts of the German government as well as so many German individuals to atone for the sins of their fathers.

I did warn you that I was ambivalent about this trip…  This cognitive dissonance has accompanied me all day and I reckon won’t leave me throughout. But that has not stopped me enjoying the experience.

As we were taxiing towards the arrivals building in Frankfurt airport, our El Al plane was accompanied by a German police hummer travelling alongside the whole time. The thought struck me that a mere 70 years ago the sight of one of these vehicles would have struck terror into any Jewish heart. Today it merely comforted me and made me thankful that we were being provided by excellent security from the German authorities. How the wheel of history turns! 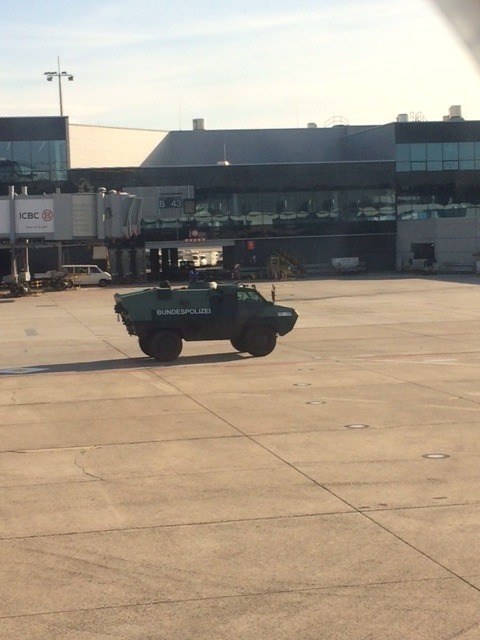 We were highly amused by the wording on the taxi that met us at the airport, “mietwagen” sounding suspiciously like “meat wagon”. 🙂  (we do have a rather juvenile sense of humour). 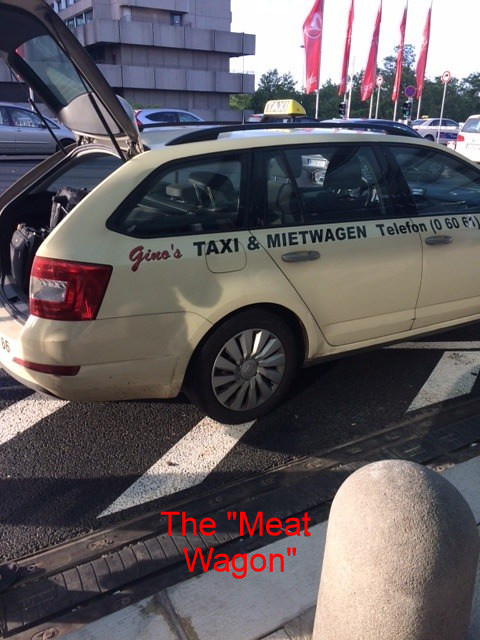 At our beautiful hotel in Michelstadt we finally met our hosts, Otto and Heidi Haag and their friend Klaus Schimmel, face to face for the first time and we had a warm and emotional welcome.  The Haags have been working for decades to research the history of the Jewish community of Michelstadt and bring it to the attention of the city fathers. They are amazing and courageous people, and very resourceful in their methods of research and in their initiative to get the town to commemorate their lost Jewish community, sometimes against some objections from the locals. 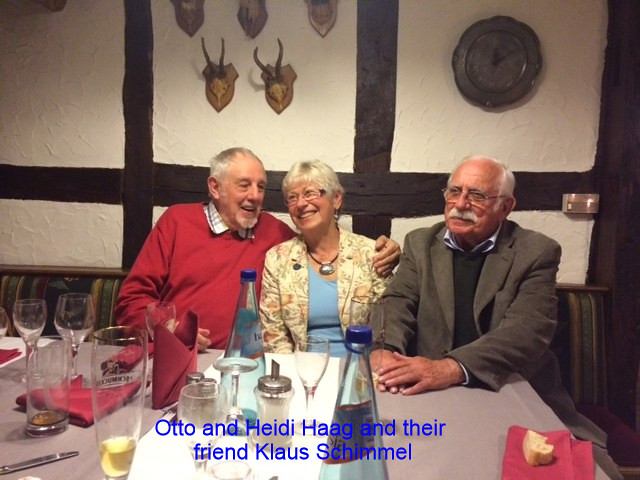 We spent a very enjoyable evening getting to know the Haags and their friend, discussing our family histories, their work, and generally chatting.

We started the day with a visit to the medieval library in the town center. It turned out to be far more interesting than I ever imagined. Our guide explained that the library was built in the 14th century by Nicolaus Matz, a priest, teacher and university professor who travelled from Michelstadt to Vienna to Speyer and beyond, but who eventually bequeathed his extensive library to his hometown.

The library contains hundreds of books, both manuscripts and early examples of printed books, of theology, philosophy and scientific subjects. 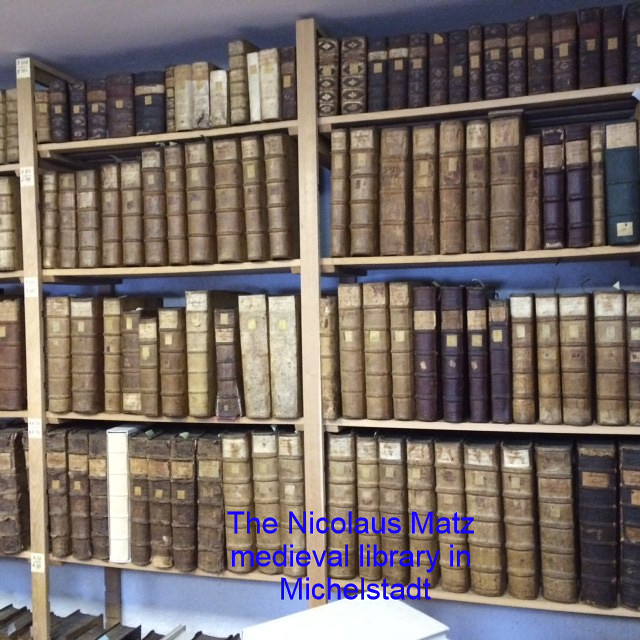 What was even more fascinating was the way that the ancient bookbinders would recycle ruined books to use as bindings. Thus a whole new science has developed, the study of book bindings! When the bindings are carefully pried loose one can see pages from other books, and it becomes a puzzle and a memory game to find matching pages used as bindings in other books. 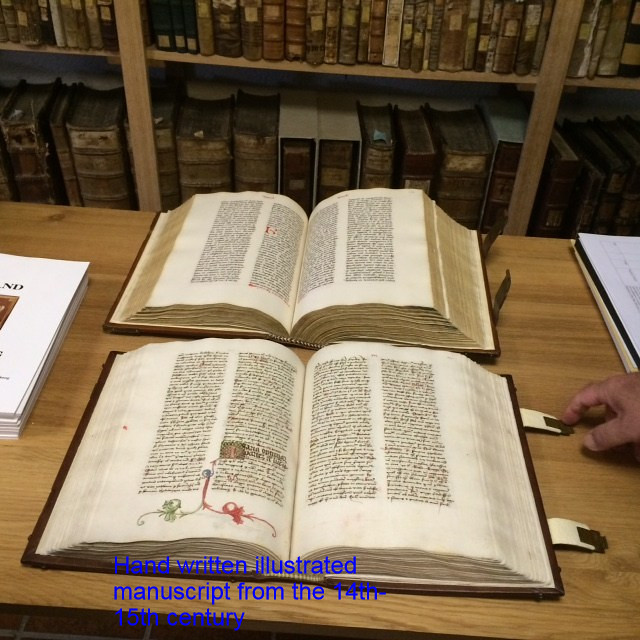 We were also shown an ancient Hebrew Bible with a short precis in German down the sides of the text explaining what was in the text. 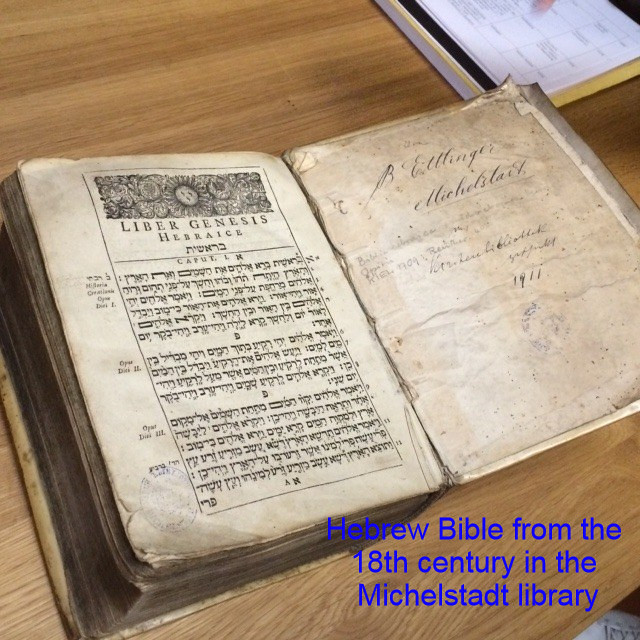 From the library we walked to the Haags’ house, and on the way, Otto Haag pointed out another project that they had initiated: the laying of “stumbling blocks” outside the houses of each Jewish citizen who had been murdered in the Shoah. These stumbling blocks are in fact small plaques inscribed with the names of the murdered citizens, and they are inlaid into the pavement right outside their houses. Even these small memorials have proven unpopular with certain elements and have occasionally been plastered over with antisemitic or anti-Israel stickers. It is gratifying to note that the local police take these incidents very seriously.  The “stumbling blocks” project started elsewhere in Germany and has been spreading throughout the country, a very blessed initiative.

The 3 “stumbling blocks” memorializing my mother’s 3 brothers David, Herbert and Uri who were killed in the Holocaust, outside their house in Michelstadt

It was a very strange, surreal and moving moment to stand there and contemplate that these 3 little stones were all that are left to commemorate that these three boys ever lived in Michelstadt.

After lunch we all proceeded to the local synagogue where services are only held now once a month, and even then there is not usually a minyan. We were guided by the visiting chazan (cantor), Roman Melamed, who showed us the interior of the shul where our grandfather used to pray. Again, the enormous sense of history combined with the surreality of finding myself in the very spot where my grandfather once stood combined  in my mind with a swirl of emotion which I and my brother are still trying to work through.

From the shul we moved on to the old Jewish cemetery in Michelstadt where the Baal Shem of Michelstadt, Rabbi Yitzchak Aryeh (Seckl Lob) Wormser is buried. The Baal Shem was regarded as a miracle worker and healer not only by the Jewish community but by all the locals as well and his grave has become a site of pilgrimage for prayers. We all stood there and prayed for the health and well-being of various family members and friends, and recited some Psalms.

These very intense moments were followed by a meeting with another friend and contact of David’s, Briggite Diersch, who has been of enormous help in our family research. She took us on a very pleasant tour of her hometown of Erbach, a couple of kilometers away from Michelstadt and explained how she herself had become involved in researching and commemorating the Jewish history of the area.

I have many more photos (and most likely quite a bit of editing) but this will be continued (hopefully) tomorrow or maybe even later. (Internet connection very slow, thoughts churning, hour very late).

11 Responses to Roots trip to Germany: Days 1 and 2