I will repost part of what I posted in my previous post and add more information and photos.

On Wednesday we travelled to Frankfurt where Otto and Heidi Haag (in particular Heidi) had arranged for us a very full and intense itinerary according to a list of places that we had asked to see, plus a couple of extras. Otto and Heidi and their friend Klaus accompanied us throughout the day.

We had a short guided tour of one of the exhibits in the Jewish Museum, the one dealing with the history of the Jews in Frankfurt, which was very educational and I felt we could have spent hours more there perusing the exhibits because of our families’ long connection to Frankfurt. It was horrifying to learn of the anti-Jewish laws which began way back in the Middle Ages and even before, and then how the age of enlightenment and emancipation eased their lot, followed by the renewal of the evil anti-Jewish laws under the Nazis.

At the museum there was a huge display board with the names of all the Jewish Frankfurt residents who had been killed in the Shoah (similar to the display of the little stones at the cemetery) where we found the names of our mother’s brothers.

After a wonderful lunch at the kosher restaurant in the Jewish community center (where, in a sad sign of the times, the security was so strict we had to present our Israeli passports in order to enter) we visited  the site of the Hirsch Realschule where my father in law and his siblings studied. There is now a modern state school standing on the site, but there is a memorial plaque both outside and inside recalling that this was once a Jewish school that was destroyed during the war.

Memorial plaque for the Hirsch Realschule which once stood on the site of a new state school in Frankfurt, and where my father-in-law’s siblings studied

We also had a short chat with one of the teachers and a couple of her students, and the teacher informed us that she was leaving that night with her class to Krakow in Poland. We were pleasantly surprised and impressed that despite these trips not being compulsory or funded by the government, most schools do go on these Holocaust education trips.

Back in our minibus we passed by the places where my grandfather and my father-in-law once lived. In both places, neither the houses nor the streets themselves exist any more.

We were taken on a short visit to the Westend Synagogue which was the most fabulous and ornately decorated shul we have seen in a long time.We learned the history of the shul, how it started out as a Liberal or Reform congregation, and then after the war and its renovation was turned into an Orthodox shul. However, unlike most synagogues elsewhere, this shul still has a Liberal congregation upstairs and a haredi Kollel (yeshiva) in the side rooms. And all the congregations get on with each other! Surely a miracle!

The West End Synagogue in Frankfurt

We concluded our trip with a visit to the Old and New Jewish cemeteries.  The walls of the Old Cemetery are embedded with tiny stones with the name, birth date, and date and place of death if known, of every single Jew from Frankfurt who was killed in the war. It was the first time that I shed any tears in Germany and am still processing all that I saw and felt.  It has been said that 6 million deaths is a statistic but one person is a tragedy. Seeing those stones, and finding the names of my mother’s three brothers, was a personal emotional jolt, yet seeing the hundreds of yards of stones along all the walls of the cemetery, going round the corner and then again, emphasized the sheer numbers, the statistics, the magnitude of the Holocaust. It is a very powerful memorial.

David Strauss, eldest of my mother’s brothers killed in the Shoah

Elchanan (Herbert) Strauss, the 2nd of my mother’s brothers killed in the Shoah

Uri Michael Strauss, third of my mother’s brothers killed in the Shoah 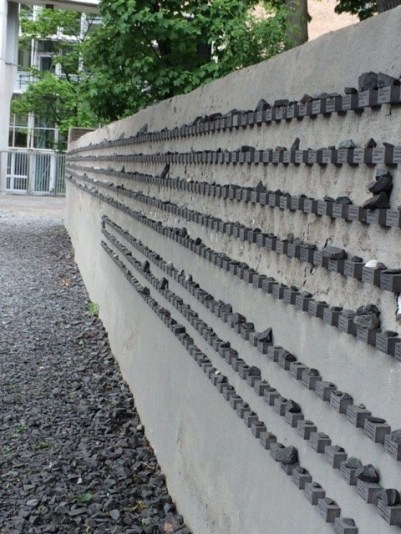 Wall of memorial stones around the Old Cemetery of Frankfurt, with the names of all the Frankfurt Jewish citizens killed in the Shoah. The names continue around 3 walls of the cemetery, 30,000 in all

The cemetery itself looks almost empty, with large expanses of grass and trees, and strange looking monuments dotted around. It took a few minutes to realise that the “monuments” were piles of gravestones that had been found after the war (whether destroyed by the Nazis or by the Allied bombing), and since no one knew where the graves were any more, the gravestones were simply piled together in different arrangements.

Gravestones piled up together in the old Frankfurth Jewish cemetery 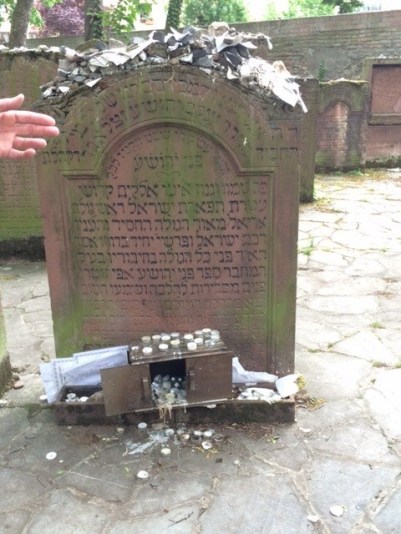 Kever of the Pnei Yehoshua זצוק”ל

We found the grave (at least assumed to be) of the Pnei Yehoshua, Rav Yaakov Yehoshua Falk,  a famous Rabbi from the 18th century, and recited a Psalm in his memory.

We continued to the new cemetery where we first found the grave of Rabbi Shimshon Refael Hirsch, who could be considered the founder of Modern Orthodox Judaism. 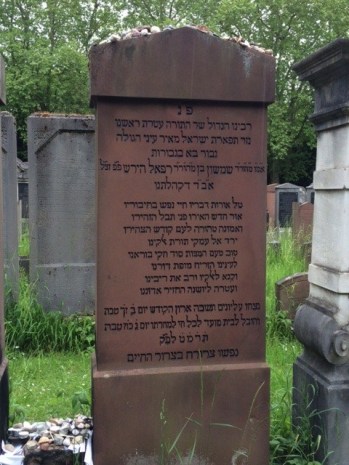 A very strange thing happened during that search. The weather had been cloudy but warm, but as we progressed through the cemetery it became darker and a gentle rain began. The rain got heavier as we neared our great-grandparents’ graves, and as we got there a short sharp downpour began. We stood in the rain and recited a few prayers and psalms, and as we concluded our prayers, the rain eased off. When we left the sun came out.  Now that might have been coincidence but we have a different theory… 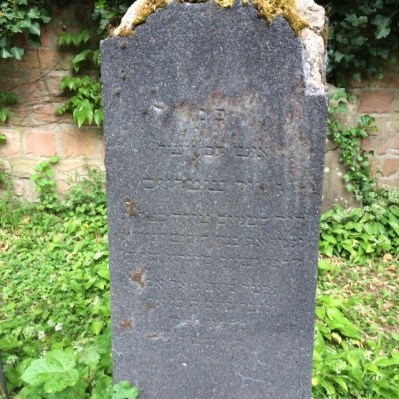 We returned to Michelstadt exhausted physically and wrung out emotionally, but we were all very glad we had made the trip and accomplished so much. It left us all a taste for more.

On Thursday, we travelled to Fuerth, our father’s home town where we had a fascinating tour of the Jewish Museum which is situated in an old Jewish house, and viewed the ancient Mikve (ritual bath) which still existed and was still filled with water rising from an underground well situated underneath the museum.

The mikve underneath the Jewish museum, still filled with fresh water from a well

The director of the museum, a delightful young American woman named Daniela Eisenstein, served as our guide throughout our visit and she had prepared our itinerary meticulously. After seeing the museum’s exhibits (the museum is supposed to be expanding in the coming months) we saw the house where my father lived which was also in the same complex as the school where my paternal grandfather taught, and that in turn was next door to their shul. 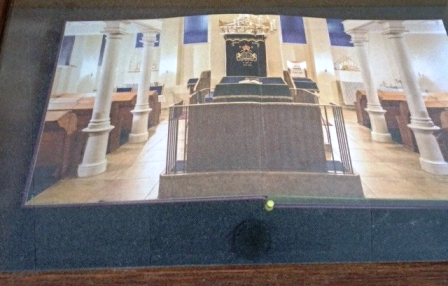 Photo of the Fuerth shul, still in use today

We were pleased to note that the building still served as a Jewish community center, and in the courtyard outside, we looked up and saw our father’s old bedroom window! It could be identified by a fault in the wall where there once was a balcony.

A plaque on the wall commemorated the Jewish soldiers who had fallen in the First World War (fighting for the Kaiser) – including our grandmother’s brother Heinrich (Chaim) Heinemann.  Another plaque commemorated Dr. Isaac Hallemann, the director of the orphanage in Fuerth who chose to accompany his 30 young charges to the concentration camps rather than use his exit visa to get himself to freedom in Palestine. His children did escape, and his daughter was a member of our shul here in Petach Tikva until she died very recently.

Plaque commemorating Dr. Hallemann, the director of the Fuerth Orphanage, who was killed with the orphans in the concentration camps

We also went by the house where my father’s grandparents lived. They were lucky enough to escape to Brazil with their daughter, our grandmother’s sister, and thus survived the war.

We proceeded to the town square (now an underground train station) where my father’s family was marched to on Kristallnacht, (see my family history page for Dad’s story) and then to the library, which is now a theater, where my grandfather and the other men were taken to after the initial “assembly”, to be beaten by the Nazis. Again, it was shocking to actually see the places, and to absorb how innocuous these sites seem to be today.

We continued to the Old and New cemeteries to find graves of long deceased relatives, and then finished with a visit to the Schulhof, the square where 4 synagogues once stood together.  As in the Frankfurth shul, these 4 congregations of different denominations would all meet after Shabbat services for Kiddush together. The unity of these communities is something that really should be emulated everywhere.  The synagogues were all burnt down on Kristallnacht, and all that is left now is a rather ugly monument, and a modern housing estate around the square. 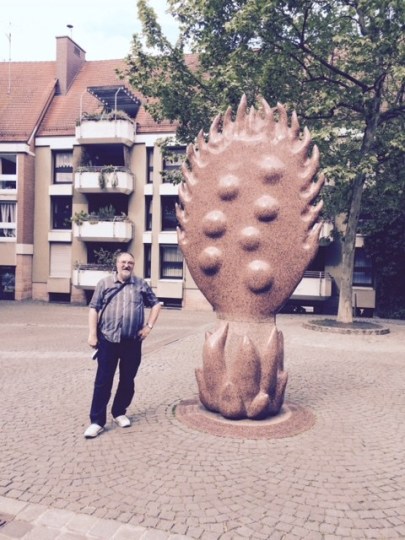 Memorial to the Shoah at the Schulhof, the site of 4 synagogues, in Fuerth

My father recalls asking his mother “why is the sky red?” as they returned from their forced march to the square on Kristallnacht, and his mother saying “Quiet! Don’t say a word!”. I’m trying to imagine his trauma as a 9 year old child, and cannot fathom it.

We left Fuerth rather subdued at the depressing memories and the sight of the rather grim-looking town and went further back into history.

We continued our journey to the little village of Schopfloch – which I used to think was a made-up name 🙂  – an altogether happier affair, where we saw the village where our paternal grandmother grew up.

We had imagined a little dumpy town but it is in fact quite a pretty little village. Our great-grandparents Heinemann owned a knitting factory there, and the building still stands though it is now residential. We met a couple of locals who remembered the factory and the family name, but none of them could speak Lachoudish – the curious mixture of Hebrew and German (not Yiddish) that became the local dialect amongst both Jews and Gentiles.

A street in Schopfloch. We think the lower house was my grandmother’s school

Memorial to the Jews of Schopfloch murdered in the Shoah

Even in this tiny village of 2,000, the Holocaust did not pass over the Jews and we found the memorial plaque in the memory of those murdered.

This intense and emotional day ended at Frankfurt Airport where we stayed at a hotel overnight before boarding our plane home.

I will post one more installment about our roots trip in the coming days, with a little of the history of the hotel in Michelstadt where we stayed, and general feelings and conclusions about our trip.