Guest Post: Our Roots trip to Germany – How the Stolpersteine project was born

This is a guest post by Heinz-Otto Haag, who together with his wife Heidi was our host in the town of Michelstadt during our recent roots trip to Germany.

The Haags also did extensive research on our behalf to help us locate sites of family interest in Frankfurt. Below he explains how the Stolpersteine project – those “stumbling blocks” placed on the pavements – began and was carried out by Heidi and himself, and many of their friends and town officials.

The idea was first proposed by a Cologne artist about 20 years ago and has since then spread to all the countries and territories which the Wehrmacht had occupied during WW II. Stolpersteine are 10 x 10 cm brass plates inserted in the pavement in front of the houses in which Shoah victims had once lived. Each such plate bears the name of the victim, his year of birth, and the date of deportation and/or death in the camps. More than 50.000 Stolpersteine have meanwhile been installed in more than 750 towns and cities throughout Europe.

The purpose behind this idea is threefold:

Firstly, Stolpersteine shall keep the memory alive of the victims and remind passers-by of this part of German history.

Secondly, they give the victims their names back. Every deported person who was not killed right away without any registration had his name taken away and replaced by a number. He had lost his identity. Stolpersteine are thus also a means of restoring the victims’ identity.

Thirdly, the victims have no graves or, as Paul Celan put it, “Sie fanden ihr Grab in den Lueften”. Remembering this, Stolpersteine are also a place where survivors and descendents can mourn and pray for their dead.

The initiative for installing Stolpersteine in a town may be taken by the town administration, by schools or other institutions , or by private groups or individuals. The activity is normally financed by private sponsors. 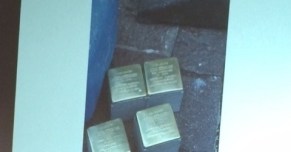 In our little town of Michelstadt, we started in 2008 with a group of five or six people asking locals to contribute money to our activity. In 2010, we were thus able to have a total of 59 Stolpersteine installed in our town.

Through our Stolperstein research we found contact to many descendants of Shoah victims from Michelstadt. Most of them let us generously have whatever documents, photos etc. they still had in their possession and told us their family stories. It was only natural therefore that we collected all this material and wrote a book about the Jewish families of Michelstadt which appeared in 2013 under the title “Ich gebe ihnen einen Namen” [These words “I give them a name” come from the Hebrew, from the Prophet Isaiah 56:5: ונתתי להם בביתי ובחומותי יד ושם – Venatati lahem beveiti uvechomotai yad vashem: “And I will give to them in my house and within my walls a memorial, lit: Yad Vashem, whence the name for Israel’s Holocaust Museum. -Ed.] Thereafter, we prevailed upon our town administration to send out an official invitation for a one-week’s visit of Michelstadt to all the descendants with whom we had been able to establish contact. In order to finance this initiative, we again collected money from local sponsors and in this way have meanwhile enabled our town fathers to welcome some 20 descendants of former Michelstadt Jews. 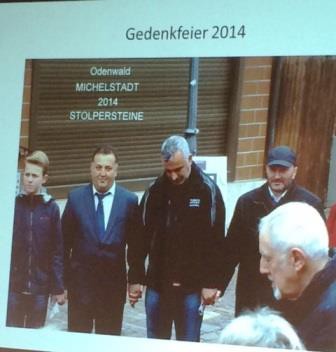 The people of Michelstadt at the annual commemoration at the Stolpersteine

In all our activities, our primary objective was to cooperate closely with the Christian, Jewish and Alevitic communities of Michelstadt and, above all, with our local schools. In this way, we have since 2010 each year held a ceremony on November 9th (the anniversary of Kristallnacht) during which students of our schools lay a rose and a pebble next to every Stolperstein as a Christian and a Jewish symbol to honour the dead. The ceremony ends in front of each house by the crowd taking one another by the hand and together pronouncing in Hebrew and in German the words “Shalom alejchem! Friede sei mit Euch!”

Heinz-Otto and Heidi sent us the following beautiful message after we returned from our trip:

It has been a great pleasure for our Stolperstein-Initiative to welcome Anne Klausner and her husband, as well as her brother David Prager and his wife, here in Michelstadt – the place from which their grandparents had once been expelled during the dark Nazi era.

We are fully aware that for them the decision to set foot on German soil was not an easy one and we are deeply grateful that they have come nevertheless.

For us, the days which we were able to spend together with the two couples have been a wonderful experience and we have learnt a great deal during this visit. We were able to exchange opinions in an atmosphere of frankness and openness which has greatly impressed us. All topics could be discussed between us without any political taboos on either side. We will never forget this experience which has so much enriched us. It has also given us courage to continue our work, especially in contact with our local schools, in order to ensure that the coming generations may never forget this part of our history and defend our democratic system against any resurgence of neonazism.

Heinz-Otto, thank you for this very interesting explanation of the Stolpersteine project.  This wonderful initiative raises many emotions in all those who read about it. May G-d grant you and Heidi the courage and strength to continue with your blessed work.

We wish to thank you for arranging a fascinating, educational, enlightening and emotional visit to Germany. You helped us to reconnect to our family history and also to the history of the Jews in Germany, something which too many people are not fully aware of. We also thoroughly enjoyed being in your company, just being able to get to know each other as regular friends.

The meticulous planning and arrangements for all our visits and trips were greatly appreciated, and of course how can we adequately thank you for hosting us at that beautiful hotel, Zum Gruenen Baum.

Since we’ve returned, all our friends and acquaintances, and especially our family, have been very interested in hearing about our experiences and have reacted very enthusiastically to our reports.

May G-d bless you all for the good work you are doing, for your courage and persistence in the face of objections, for fighting to preserve the memory of the Jews of Michelstadt.

One final postscript to our story. We were put up at a beautiful historic hotel in Michelstadt, Zum Gruenen Baum.

The hotel has been in the same family’s hands for over 350 years. Barbara, the charming owner of the hotel, showed us a very old photo of the grounds of the hotel, from around 100 years ago, which hangs in the dining room where we had our gala dinner. In that drawing one can see the back of the synagogue where my grandfather prayed, and also the house next door which became my grandparents’ and my mother’s home. That house does not exist any more. What was of even greater interest was the little shack between the synagogue and the hotel. As Barbara explained, in that shack was the Mikve, the Jewish ritual bath, which was fed by the local river.  The river and the shack were both on the hotel grounds, but the family gladly allowed the Jewish community to use the ground for their own community’s use.

Behind the hotel Zum Gruenen Baum 100 years ago, showing the synagogue and the Mikve

Behind the hotel today. The shack and the house are gone.

We saw this as an excellent example of the way the two communities, Jewish and Gentile, communicated and cooperated all through the ages until it was all destroyed.

Having travelled to our parents’ home-towns and spoken to many Germans, we came back to Israel with a great appreciation of the sincere efforts of so many good people to atone for the sins of the fathers, to make amends with the next generation of Jews, and most importantly to educate the next generations that such a terrible crime as the Holocaust shall never be able to happen again.

7 Responses to Guest Post: Our Roots trip to Germany – How the Stolpersteine project was born