Our “peace” partners internationalize their war against Israel

I’ve written about our “moderate” “peace” “partners” before, but it bears repeating. The people with whom the world demands of Israel to make peace is not peaceful at all. In fact their stated aim, openly and publicly declared and available for anyone to see if they are interested in looking, is not a state of their own, but a state instead of our own. They want to destroy Israel and will use any means possible. If war doesn’t work, then terrorism is to be used. Since Israel defeated the worst of the terrorist threat with the security barrier, then internationalization is the next step.

We see this internationalization at work constantly in all sorts of international forums, in particular the UN – which has its own dismal record with regards to Israel. The latest farce was the UN declaration that Israel is the world’s worst violator of health rights in the world! This at a time when Israel is granting – free – medical care to the worst kinds of terrorists as well as enemy combatants and civilians on the Syrian border.

GENEVA, May 20, 2015 – As Israeli hospitals continue their life-saving treatment for escalating numbers of wounded Syrians fleeing to the Golan from the Assad regime’s barbaric attacks, the U.N. reached new heights of absurdity today by accusing Israel of violating the health rights of Syrians in the Golan.

By a vote of 104 to 4, with 6 abstentions and 65 absent, the Jewish state was the only country in the world to be singled out as a violator of health rights when its alleged victims were spotlighted by the annual assembly of the U.N.’s World Health Organization.

The resolution on the plight of Israel’s alleged victims, which was the 2015 assembly’s only treatment of a specific country situation, sent an unmistakable message when it ordered “health-related technical assistance” for “the Syrian population in the occupied Syrian Golan,” and when it called on the director-general of the World Health Organization to report on “the health conditions in the occupied Palestinian territory, including east Jerusalem, and in the occupied Syrian Golan” at next year’s session.

There was no debate on the health of the Yemeni people now under indiscriminate Saudi bombardment, no mention at all of the 1,850 Yemenis killed, the 7,394 wounded, and the 545,000 displaced, many of whom are desperate to find food.

On the contrary, the representative of Saudi Arabia’s theocracy took the floor today, without any sense of shame, to denounce “Israeli intransigence,” and to beseech “all peace loving states” to adopt the distorted and politicized resolution.

All of this while the Wahhabist regime advertises the hiring of eight more executioners to carry out beheadings, which have spiraled this year to more than double the amount in 2014. ISIS can only be jealous of what this UNHRC presidential candidate has achieved.

Nor is this year’s UN health assembly holding a single debate on the health rights of Ukranian civilians caught in a war with Russian-backed militias. The 6,000 people killed, and the one million displaced, are simply of no interest.

Preoccupied by the alleged sins of Israelis, the UN turned a blind eye to the latest warning by health experts, reported in Newsweek, that Ukraine is in imminent danger of experiencing the first polio epidemic Europe has seen for decades.

Most absurd of all, though, was that today’s text falsely claimed a dire need for “health-related technical assistance” for “the Syrian population in the occupied Syrian Golan” — who in fact have excellent treatment — and said nothing about the Syrian population being slaughtered in Syria.

In an outrageously disgraceful manner, most of the EU voted IN FAVOUR of this biased, absurd, upside-down resolution:

If the European Union—all of whose member states disgracefully joined the jackals by voting for today’s resolution—had wanted, they could have set the record straight, and taken a stand against such base demonization of the Jewish state.

Here’s the list of those who voted, to name and shame them (although they seem incapable of embarrassment, let alone shame):

This seems to be an actualization of the wise words of Abba Eban:

If Algeria introduced a resolution declaring that the earth was flat and that Israel had flattened it, it would pass by a vote of 164 to 13 with 26 abstentions.

Our “peace” “partners” also use the sleazy BDS tactics of boycotts and sanctions in their latest attempt to destroy Israel via delegitimization and demonization. Latest is their petition to FIFA to kick Israel out of international soccer  – which I’m not sure if it is a new petition or a continuation of the failed one from last year – complaining that Israel is needlessly detaining their soccer players at checkpoints. No mention of the fact that the checkpoints are not needless at all, and if the Palestinian soccer players weren’t also terrorists, there would be no need for the security checkpoints in the first place.

FIFA’s head, Sepp Blatter, has admirably tried to deter the Palestinian petition, but without success. Now it will be going to the vote.

Shurat HaDin, the Israel Law Center, has now thrown the Palestinians’ FIFA petition back in their face by submitting a petition of their own to expel the Palestinian soccer chief Jibril Rajoub for his own terrorist activities:

Shurat Hadin provided a slew of examples of Rajoub’s calls for violence and discrimination against Israelis which violates Article 3 of the FIFA Statutes and of Article 53 of the FIFA Disciplinary Code.

“It is outrageous that FIFA would allow a senior official of a terror organization to serve in a public position,” the letter stated.

It pointed out that Fatah is the parent organization of the murderous al-Aqsa Martyr’s Brigade, and that Fatah was the organization behind the killing of 11 Israeli athletes at the 1972 Olympic games in Munich.

“Rajoub, personally, and in combination with others on the Central Committee of Fatah, actively supports and renders aid to AAMB and engages in public conduct designed to foster discrimination and terrorist violence against Jews and Israelis, in
violation of the FIFA principles and of the FIFA disciplinary code.”

A timely reminder of who exactly are our “peace partners”, although I’m sure I’m preaching to the choir here. 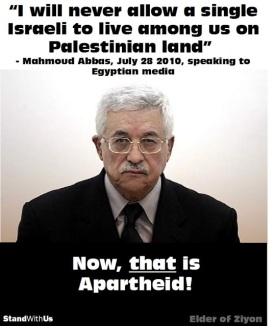 CAMERA has a partial list of anti-Israel, antisemitic and definitely anti-Israel statements made by Palestinian “President-for-life” Abbas:

Whether or not the Pope called Palestinian Authority President Mahmoud Abbas an “angel of peace” is the subject of debate. What there can be no credible debate about, however, is that Abbas is an anti-Israel –and even antisemitic– radical.

Since succeeding Yasser Arafat as Palestinian Authority president and leader of Fatah, Abbas almost invariably has been described by the press as a “moderate.” This, despite the fact that Abbas, Arafat and a few colleagues founded Fatah in 1959 to “liberate” Israel, not the West Bank (then occupied by Jordan) or the Gaza Strip (then held by Egypt).

Abbas continues to incite his people against Israel and recently described Jews who visit the Temple Mount as a “herd of cattle.” He has praised Haj Amin al Husseini, the Grand Mufti of Jerusalem who cooperated with the Nazis during the Holocaust, and has lauded Dalal Mughrabi, a terrorist who perpetrated the Coastal Road Massacre of 1978 which resulted in the deaths of 38 Israelis including 13 children.

Official PA TV and other media outlets under Abbas’ control frequently describe Israeli cities as part of “Palestine,” exhibiting no inclination to recognize Israel’s right to exist or even the fact of Israel’s existence.

Some small comfort can be gained from the blowback emerging from the EU after a PMW report on how European aid money is being paid by the Palestinians to terrorists imprisoned in Israel and their families:

Click for full PMW report in PDF
The MPs of three parliaments [Dutch, British and German] expressed condemnation of PA practices, from rewarding terrorism to promoting violence and glorifying murder of Jews.
…
Conclusion of the PMW report:
“This report exposes that the PA’s creation of a PLO Commission of Prisoners’ Affairs to fulfill the same services previously supplied by the PA Ministry of Prisoners’ Affairs, was done solely to satisfy Western donors’ demands that the PA cease paying salaries to terrorist prisoners. This report further documents that the existence of the PLO Commission has not changed the policy of paying salaries to terrorists. The PLO commission may have been created for the sole purpose of deceiving the European donors, who don’t want their money to the PA to be used to reward terrorists. The PA continues to pay salaries to terrorists in prison in spite of European and US demands that donor money to the PA not be used to reward terrorists.”

One final comment. Despite the fact that I mock “President-for-life” Mahmoud Abbas, the truth is that if proper elections were held today in the Palestinians territories, Hamas would win. That would take us out of the frying pan into the fire. Khaled Abu Toameh recommends reforming the PA rather than holding elections:

Free and democratic elections are the last thing the Palestinians need now. Such elections would only pave the way for a Hamas takeover of the Palestinian Authority and plunge the region into chaos and violence. As long as Abbas’s Fatah faction is not seen as a better alternative to Hamas, it would be too risky to ask Palestinians to head to the ballot boxes. Instead of pressuring the Palestinians to hold new elections, world leaders should be demanding accountability and transparency from the PA.

They should also be urging the Palestinian Authority to pave the way for the emergence of new leaders and get rid of all the corrupt old-guard representatives who have been in power for decades. Finally, the international community should be urging the PA to stop its campaign to delegitimize and isolate Israel, which drives more Palestinians into the open arms of Hamas and other radical groups, who assume that if the Israelis are as terrible as they are told, they might as well join the group dedicated to killing them rather than to discussing peace.

To paraphrase Binyamin Netanyahu, I can’t see peace between Israel and the Palestinians coming in my lifetime under these circumstances. The best we can hope for is to manage the situation and improve the life-style of their innocent civilians.

12 Responses to Our “peace” partners internationalize their war against Israel