Our visit to Sderot and the Emunah Trauma Center

On Monday I travelled to Sderot with a group of friends from my local chapter of Emunah (the National Religious Women’s Organization). We wanted to see the Emunah-funded trauma center and, as inquisitive and curious Israeli citizens, we also wished to see the sites of this famous little town.

The Emunah Trauma Center was provided with its original funding by British Emunah and the Ronson family, and it continues to be funded by Emunah and private donors. It receives no government or health-fund funding at all. Patients can simply call up to make an appointment, although they are sometimes referred by their doctors or from the government funded Hosen Center (Center for Resilience). The Hosen Center treats emotional and psychological trauma caused for the most part by the frequent rocket attacks on Sderot, but many times the trauma is expressed physically rather than mentally, and that’s where the Emunah Trauma Center comes in, with its focus on alternative medicine and hands-on healing.

Dr. David Mandel, a Jerusalem-based psychiatrist, explained that he came to work in Sderot and began to realise the urgent need for such a trauma center.  However as he worked to set up the center  he wasn’t sure at all would work!   He didn’t know if a building could be found, and if the demand or the funds would exist to keep the center going. As you can hear in the audio link below, the trauma center turned out to be a greater success (if that’s the right term) than he imagined. Click on the orange arrow below to hear the short talk that Dr. Mandel gave us in which  he explained the history of the center and how the treatment is carried out. (Apologies for the sound quality, turn up your speakers for better sound).

I have also embedded an information leaflet produced by the Trauma Center explaining their work, the various therapies, and some case studies demonstrating the effectiveness of the treatments. (The document was aligned from right-to-left which affects the alignment of some of the paragraphs).

View this document on Scribd

Dr. Mandel described how the center was the only fortified building in Sderot at the time, which was what made it the perfect site for a trauma center, since the patients could relax even during a missile attack. Later on more rooms were added and they too have been fortified.

After Dr. Mandel introduced himself and after we had met Tami, the manager of the center, (who had also arranged light refreshments for us too as a very nice surprise for us) we had the pleasure of meeting some of the therapists: Tami Noy the masseuse, Galit Avraham who treats with Chinese medicine and shiatsu, and Hava Mahler, who also uses Chinese medicine and massage. We visitors were offered acupuncture or acupressure in our ears (for balance and for good sleep) which most of us accepted gratefully, and while we were waiting, Galit and Tami went around lightly massaging our necks, shoulders and backs. What a wonderful experience that was! We all decided there and then we should like to move to Sderot! 🙂

The therapists described to us some case studies, and also described for us how they themselves cope with their own trauma. After all, they too live in the rocket-zone and have to suffer the same alerts and dangers, with the same tension and worry for their families. One aspect which we hadn’t all considered was the extreme tension suffered by caretakers of all types: kindergarten and school-teachers, doctors, nurses, social workers, police officers, caregivers etc., who are always “on call”, even when they are off duty, always having to worry about other people and ensure their safety. These people never get to NOT be the “adult in the room”. They too sometimes come in to the trauma center just to unload their tension and have someone take care of them for a change. The therapists themselves have their own inter-staff therapy too.

We cannot express strongly enough our enormous admiration for the dedicated staff of the Emunah Trauma Center and we are proud that the organization to which we belong is playing such an important part in the maintenance of this vital institution. 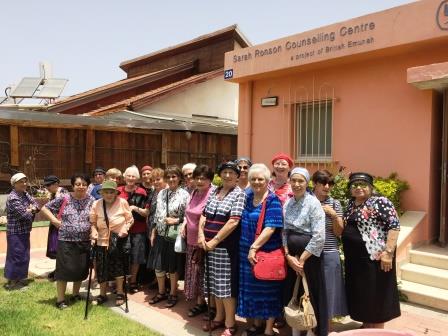 When we left the center we were met by Atara Orenbuch, the daughter of one our members who has lived in Sderot for about 16 years. She served as our tour guide for the rest of our visit. She took us to our next stop: the workshop of the local Enosh branch. (Enosh is a nationwide organization for the rehabilitation of the mentally handicapped.) We saw – and bought – some of the beautiful ceramic products that the patients produce. Below you can see the entrance plaque to the workshop made by the patients themselves, and a beautiful bowl that I bought to grace our own Shabbat table.

Entrance plaque to Enosh – ceramic hand-made by the patients themselves

After leaving the Enosh workshop, we climbed back onto our minibus and Atara guided us around Sderot. She pointed out the “miguniot” – the concrete cubes that serve as bus shelters – literally, for they provide shelter from rockets as well as from the weather – and the various fortifications that have been added to houses, schools, kindergartens, and even public parks, so that as much as possible the residents have to run no more than 15 seconds in order to reach safety.

And remember – 15 seconds is all they have. The sobering reality was difficult to absorb no matter how much we read about it or hear about it on the news.  (Click each picture to enlarge, and scroll through the gallery. Click X on top left to close gallery and return to blog).

Atara told us that despite the presence of the miguniot around the town, not every single street is covered. One day she was in her car with her baby when the Code Red siren went off. She jumped out of the car (because being inside the car is the most dangerous place in a rocket attack) and undid her baby’s car seat straps (all within 15 seconds!). There was no place to shelter and no time to run so she placed her baby on the floor and crouched over her, as mothers have been shown to do. She said she felt so exposed, and yet instead of feeling frightened she said she was furious! She was angry that in this day and age, in the sovereign State of Israel, Jews are still being made to cower in front of the enemy and take cover. Of course we all know the answer to the situation – only it isn’t politically correct to suggest carpet-bombing Gaza.

But it’s not all bad and dangerous in Sderot. We were very pleasantly surprised to see that contrary to our preconceptions, Sderot has some lovely parks (not enough of course, according to Atara) and some very beautiful new building. In fact there is building going on everywhere. Sderot is a booming town in more ways than one, and housing is in short supply. Part of the reason for this is, ironically, the success of Hamas’s long range rockets! Until recently, the younger generation were leaving the dangers of Sderot for the safety of the bigger nearby cities like Ashkelon, Ashdod and Rishon LeZion. But since last summer, when all those towns, and even further north (e.g. my very own Petach Tikva) came under fire from the long-range missiles, the younger generation decided to move back home to the warm and familiar community which they had missed. And what with the newly fortified housing and public spaces, Sderot is in some ways at least as safe as other towns in the region.

Parks and new housing in Sderot

After a lunch-break at Atara’s lovely home (where she generously provided us with drinks and home-baked cakes) we headed to the Sderot police station where we saw the famous display of Kassams and Grad rockets which have landed (or rather, exploded) in Sderot and its surroundings. It is truly shocking to see the hundreds of rockets stacked slightly hapharzardly on shelves in the courtyard. And these are just a fraction of what has been shot at the poor residents of the area. (Here too, click on each picture as above to view the gallery).

We had originally planned to visit the lookout point in Kibbutz Nir Am, right on the Gaza border, but the previous day’s rocket fire had deterred us somewhat. Instead we had decided to go to the Hesder Yeshiva (where the students combine Talmudic studies with IDF service), where they had built a huge Menorah out of Kassam rockets. But the elevator to the 4th floor where the Menorah was located was out of action, and four floors were three too many for most of our ladies.

So we U-turned our decisions and went to Nir Am after all, to the lookout point which was dedicated in memory of Asaf Siboni, an IDF soldier who was killed in the IDF helicopter accident in 1997. We were a little concerned for the security situation, however, thank G-d all was quiet, and if it were not for the fact that barely 2 km away was a seething hotbed of hatred for Israel and Jews, we would have relaxed and enjoyed the view.

As it was, the view was quite amazing, and for a moment we could almost imagine we were seeing Tel Aviv on the skyline, and not Gaza. In fact, contrary to all that you may see and read on the news, Gaza is not a ruin, not destroyed and not a pile of steaming rubble. All that we could see were buildings, including high-rise apartment blocks, and the chimneys of some industrial installations or factories.

View of Gaza from Kibbutz Nir Am

Lookout point in memory of Asaf Siboni, view of Gaza from Kibbutz Nir Am

We returned to Sderot to take Atara back to her house, and  then travelled back to Petach Tikva feeling on the one hand happy to see how Sderot has developed, and proud at the contribution of Emunah to the resilience of the community, but very much sobered by the reality in which the residents of Sderot and the entire Gaza envelope region is living.

We want to thank Atara Orenbuch once again for taking the time and effort to guide us around her hometown and for “lending” us her house for our lunch-break. Once again we also want to thank the workers of the Emunah Trauma Center for hosting us and salute them for their dedication.

May Hashem continue to grant strength to the residents and all those who work in Sderot and its surroundings, may He continue to watch over them and keep them safe, and may He bring an end to all the wars.