We have witnessed the ongoing surrealism (surreality?) of the US State Department insisting that Jerusalem is not the capital of Israel, and this week the US Supreme Court confirmed this stance when they issued their decision that Menachem Zivotofsky cannot write “Jerusalem, Israel” in his US passport as his birth-place, but can write only “Jerusalem” – as if it’s a stand-alone country or a city-state.

We could and should be outraged at this ridiculous attitude, and indeed President Ruby Rivlin takes the State Department to task: 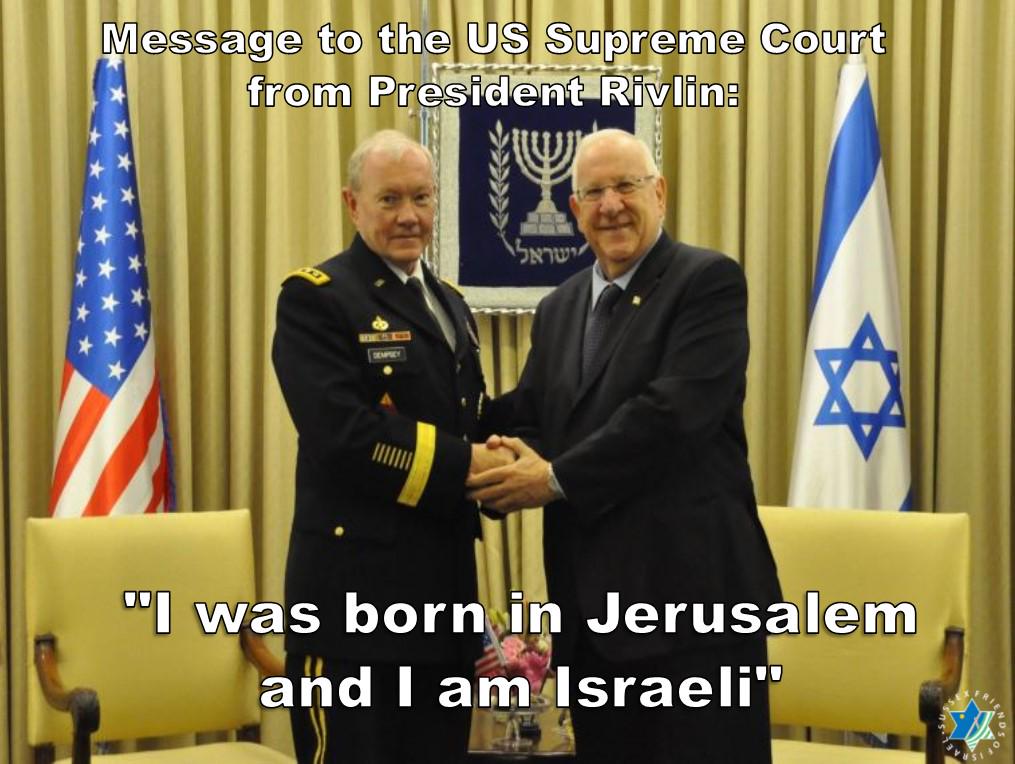 But we can also take a small measure of comfort in that the Supreme Court didn’t take a stance on the status of Israeli sovereignty in Jerusalem itself as much as on the separation of powers in the American political system:

Competing claims to the Holy City were not the only timeworn and sensitive issue the justices contended with in their 6-3 decision on Monday, which upheld the State Department’s policy of not allowing Americans born in Jerusalem to list “Israel” as their birthplace. The Supreme Court in Zivotofsky v. Kerry waded into tensions dating to the founding of the United States over whether the executive or the legislative branch determines foreign policy.

The ruling effectively nullified a law passed by Congress in 2002 requiring the State Department to list “Israel” as a birth country for Jerusalem-born Americans, should the citizens request it. Like its predecessor, the administration of President George W. Bush, the Obama administration said recognition of another nation’s sovereignty over territory was a matter strictly for the executive branch.

Pro-Israel groups had hoped for a decision that would determine US recognition of Jerusalem as Israel’s capital. But after hearing judicial interjections during oral arguments on the case last year, some feared that that case was mutating into a broader issue over Congress’ role in determining foreign policy.

Marc Stern, who wrote the amicus brief filed by the American Jewish Committee arguing that recognition of another nation was a matter for Congress as well as the president, said the decision left intact the traditional American ambiguity over which branch determines foreign policy. “This issue has been unsettled for 200 years, and the court leaves much of it unsettled today,” he said.

Stern, the AJC’s general counsel, called the decision “as good a defeat as we could have suffered.”

That’s because Kennedy’s majority decision considered only the president’s right to recognize another nation’s sovereignty.

Yet the decision’s narrow cast drew expressions of relief from Alyza Lewin and her father Nathan Lewin, lawyers known for their pro-Israel and Jewish advocacy who represented Menachem Zivotofsky, the 12-year old Jerusalem-born American at the center of the case, as well as the array of Jewish groups that had backed Zivotofsky in friend of the court briefs.

“Justice Kennedy acknowledges that ‘the subject is quite narrow: The Executive’s exclusive power extends no further than his formal recognition determination,’” the Lewins said in a statement. “Congress’ broad powers to deal with foreign policy remain extensive and virtually unlimited.” 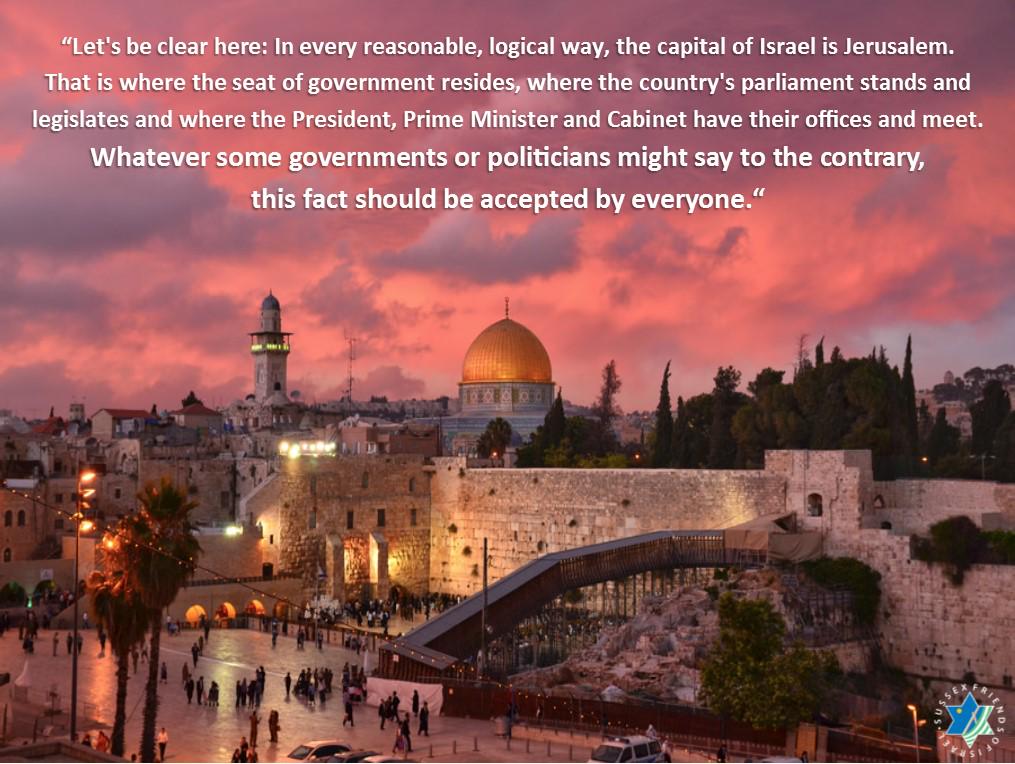 Jerusalem is Israel’s capital – it can’t be denied

In the light of this controversy, and especially taking into account the tensions between Congress and the Administration concerning Israel (e.g. Netanyahu’s speech to Congress), not to mention the cold neutrality if not outright hostility to Israel in much of the media, I was quite astonished to read this rebuke to the Administration about their stance on Israel – in CNN of all places!

Here’s Freda Ghitis delivering a short sharp cold shower of common sense in “Time to be honest about Israel’s capital“:

(CNN)Diplomacy sometimes creates moments of delusion, when learned men and women seem to lose touch with reality and speak in confusing sentences. That fact is on clear display when it comes to the issue of Israel’s capital.

Let’s be clear here: In every reasonable, logical way, the capital of Israel is Jerusalem. That is where the seat of government resides, where the country’s parliament stands and legislates and where the President, Prime Minister and Cabinet have their offices and meet. Whatever some governments or politicians might say to the contrary, this fact should be accepted by everyone.

Now, this should not preclude parts of Jerusalem becoming part of another country, say, a future Palestinian state. But when it comes to Jerusalem, as we were reminded Monday by a Supreme Court ruling, nothing is simple.

Sadly, it isn’t. In reality, in many situations where the U.S. government talks of Jerusalem, it refuses to say in what country that city is actually located. Indeed, official U.S. policy says the status of Jerusalem is unresolved, subject to the outcome of Israeli-Palestinian negotiations. But while this position is based on the laudable wish to avoid harming the prospects for Israeli-Palestinian peace, there are surely better ways to achieve the same goal without denying reality.

If you want proof of how crazy this gets, I recommend watching a 2012 exchange at the State Department, when a journalist asked the U.S. spokesperson what the capital of Israel is. It happened after an awkward incident, when the itinerary for a U.S. official traveling to the Middle East reportedly listed cities and capitals, including Jerusalem, Israel. The State Department said the announcement was “issued in error,” then released a new one, in which the name Jerusalem floated by itself, unmoored to any country.

As a result, a reporter asked the spokesperson where Jerusalem is. The response sounds like an Abbott and Costello routine.

The court was right in saying the executive should have wide latitude on foreign policy. That, however, doesn’t mean the U.S. stance should remain unchanged. America looks foolish, tying itself in knots with a convoluted, illogical policy.

This is despite the fact that a better, more reasonable approach is available.

Fast forward to recent years, and Israeli-Palestinian negotiations have focused on whether eastern neighborhoods, taken by Israel during the 1967 Six Day War, would be placed under Palestinian sovereignty to become the capital of a new state.

But U.S. policy should reflect the fact that the western side of the city is not in play, because the only people who reject Israeli sovereignty over the west are those who reject Israel’s right to exist. Why, then, does Washington not acknowledge that western Jerusalem, at the very least, is Israel’s capital?

When Obama traveled to Jerusalem in 2013, Prime Minister Benjamin Netanyahu pointedly told him, “It’s a profound honor to host you in our ancient capital.” In response, Obama watched his language carefully to avoid acknowledging that Jerusalem is in Israel.

It’s hard not to feel a little bit sorry for him, having to visit a country’s capital, standing with the Prime Minister, trying to pretend that you’re not actually there — or that the city isn’t really where it is. Or whatever it is the U.S. is trying to pretend.

Ghitis admits that her solution, of recognizing at the very least Israel’s sovereignty over West Jerusalem, will not be popular with either the Israelis or the Palestinians, but it certainly would be a step in the right direction. it would enable the US Embassy – and all the other foreign embassies, let’s be honest – to relocate to Jerusalem, and to allow reality a corner seat inside the surreal (there’s that word again) existence that we call teh Middle East.

Let’s also not concentrate only on the US Administration. While they are the most obvious focus of international foreign policy, we must not forget, as I just mentioned above, that ALL foreign governments do not recognize Israeli sovereignty in ANY part of Jerusalem, West or East.

One can’t help feeling that the world does not really want to accept that – contrary to millennia of indoctrination that the fact that the Jews were evicted from Israel proves that they have been discarded  by G-d as the Chosen People – the Jews have indeed returned to Zion and Jerusalem. Not only did we return, but we returned victorious. We “returned to history” to take control of our own destiny, and much of the world does not like this one bit.

We can call it anti-Zionism, Realpolitik, or simply “political sensitivity”.  But I call it out as antisemitism. How else to explain that a mere 19 years of illegal occupation by Jordan (not the Palestinians, they hadn’t been invented until 1964) 19 years in which the Jordanians and their Arab cohorts destroyed all the synagogues in the Jewish quarter, expelled all the Jewish citizens in a mass ethnic cleansing, has “fixed” Jerusalem as the city which “the Palestinians would like to make their capital”. There are a lot of things that I would like but can’t have, like a pink pony.

The answer is no – to the pink pony and to Jerusalem being the capital of any other nation other than Israel.