If you think I’ve lost my mind when reading the above headline you would be almost correct. The above words are the actual subject of a Facebook post written in all seriousness (!!) by Asghar Bukhari. We should not be surprised at the convoluted conspiracy theory and irrational conclusions drawn by Bukhari, who is a founding member of the Muslim Public Affairs Committee UK (MPACUK), an organization which has been accused of anti-semitism, associating with a Holocaust denier, and other unsavoury behaviour. 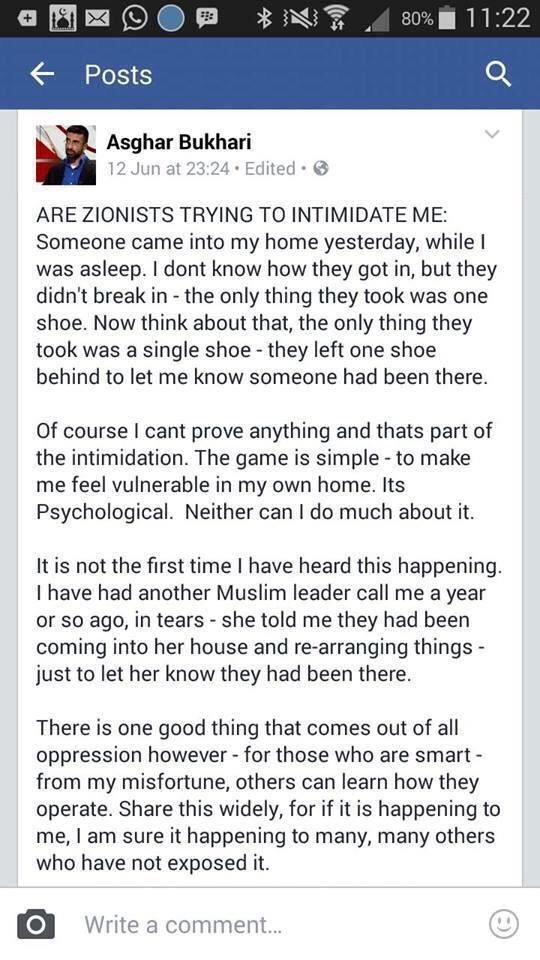 The immediate reaction to this post has been untrammelled hilarity and a trending hashtag of #MossadStoleMyShoe which has gone viral. Everyone has piled on and we are all having an enormous amount of fun.

Here is a selection of some of my favourite tweets:

Listen up men, this is your target, do not return until it has been acquired #MossadStoleMyShoe pic.twitter.com/ASHii5o3rR

These damn #Zionists will go to any lengths.. #MossadStoleMyShoe pic.twitter.com/bpJLMvSdQC

Someone unwashed up all my plates and left them in the sink. You don't think Mossad did it do you? #MossadStoleMyShoe

Before you judge Ashgar Bukhari, make sure you walk a mile in his remaining shoe (before it gets taken by Mossad) #MossadStoleMyShoe

First they steal a left shoe, then the right glove, if you still don't get the message they'll come for your socks! #MossadStoleMyShoe

The mockery has been getting to Bukhari, but it is only making him more entrenched in his lunacy;

Below I have embedded a scrolling feed of the #MossadStoleMyShoe hashtag tweets for you to keep up with the fun and hysteria (in all senses of the word). Scroll down using the scroll bar on the right hand side of the embed. Retweet or post the tweets on Facebook, and of course, add your own, to your hearts’ content! 🙂

14 Responses to Mossad stole my shoe