Speculating about Obama’s motives for the Iran capitulation 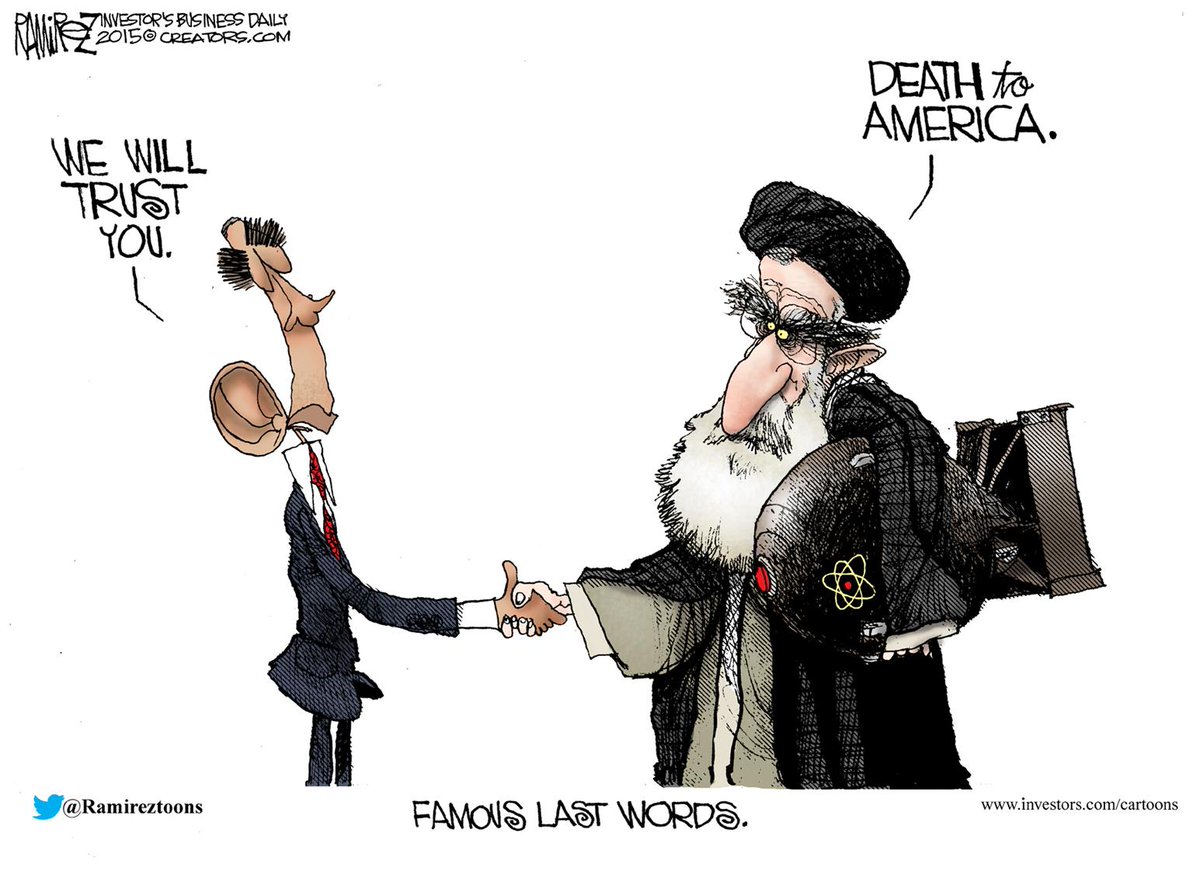 Something that has been bothering very many people about the Iran capitulation (I prefer that to “deal” because a deal implies both sides receive something, which is not the case here) is what on earth was driving Obama and his sidekicks to surrender all the progress that had been made so far on persuading Iran to halt its nuclear program, whether by sanctions or other means. No one has yet come up with a decisive conclusion but here are a couple of articles which might shed some light on the subject.

Abu Yehuda explains that Obama’s policy is as unrealistic as Bush’s but more dangerous, positing that it is based on the assumption that appeasement will work better than threats:

American policy toward the Middle East in the past two administrations has been disastrous. Maybe I’m missing something, indulging my historical hindsight or being dense myself, but it looks to me that nonpartisan ignorance and poor planning are the rule in Washington.

Bush did not understand the complexity of the situation or the intentions of the various players. He naively believed that any person would naturally prefer a free society to a totalitarian one in which his group was on top; and he didn’t realize that in the Middle East, the most violent and ruthless party usually prevails. Instead of a democratic Iraq that would anchor Western interests in the Middle East, he got chaos.

But Obama made it worse. If there was any hope of stabilizing Iraq in 2009, it was ended by his announcement that the US would withdraw all troops from Iraq by the next year. By the end of 2011, only a handful remained.

The Obama Administration, faced with the threat of the ISIS on the one hand, and the inexorable march of Iran toward regional hegemony on the other, made a cynical decision to throw in with the gang that looks the most like a winner. Here there is no naïve faith in democracy. Instead, there is a naïve faith in the efficacy of appeasement.

The Obama Administration seems to think – this is the most generous possible understanding of its behavior – that Iran can be moderated. If it is given what it wants in the Middle East (and this apparently includes the ability to produce atomic bombs), then it will reach an equilibrium with the West and end its hostility. There is, unfortunately, not a scrap of evidence that supports this hypothesis.

Israel, for its part, can’t afford to let the US test it.

It’s worth noting that not only does this policy abandon former allies, it shreds the nuclear nonproliferation treaty which, you may recall, Iran signed. But what nation will now take its responsibilities under the treaty seriously now? The Saudi bomb is next. Of course, this is the same guy who said that chemical weapons are absolutely unacceptable, unless of course they are chlorine, which isn’t really a weapon, or maybe it isn’t a chemical, or maybe they are no Jews involved so who cares.

On a similar theme, Back in December, David Daoud wrote in the Tower with great foresight that it was a crazy illusion that was motivating the Obama Administration:

But contrary to the common perception, while fundamentally flawed and dangerous for America and our allies, the policy this White House is pursuing is not as confused as it may appear.

In an interview last spring with journalist Jeffrey Goldberg, then with Bloomberg View, Obama himself opened a clear window into his vision of a parallel universe in which the clerical regime running the Islamic Republic of Iran is a “force for stability” in the Middle East of today and tomorrow. It’s an idea that meets with ridicule among almost every party in the Middle East, legislators on both sides of the aisle on Capitol Hill, and even former members of the President’s cabinet, and whose main constituency appears to be in Damascus, Tehran and 1600 Pennsylvania Avenue. Yet, as the region unravels along sectarian lines, the President is quietly attempting to cement a new American regional vision in which Iran is to play a central role.

A nuclear deal in Iran’s favor may be with in its grasp, Tehran believes. And they may not even need to make such an agreement, if simply by negotiating with the West they can resurrect their economy and stall any U.S. action against their takeover of Syria, Iraq, and Yemen, removing further obstacles to their regional hegemony.

And it is here, in Iran’s very different view of a possible rapprochement with the United States, that the real danger to regional and American interests lies. Contrary to the expectations of many U.S. policymakers, giving Iran free rein in the Middle East would not be a major diplomatic victory, but a strategic nightmare. Replacing the putative caliphate of the Islamic State with the brutal Imamate of the Islamic Republic, the IRGC, Hezbollah and the rest of Iran’s regional proxies, would be a strategic and moral catastrophe.

The defining ethic of President Obama’s foreign policy has been an “anti-Bush” path to withdrawal from the wars of Iraq and Afghanistan. The United States does not want to reenter or reoccupy Iraq, and the President has said sending troops to combat ISIS is not going to happen. Having failed once to bring order to the country, and more recently departing without an agreement that could have prevented Iraq’s disintegration and descent into chaos, the U.S. effectively handed control of Iraq over to a very hostile force. The one country that controls the politics of Iraq is Iran.

But the U.S. wants ISIS destroyed and Iraq held together, perhaps spurred on by a nostalgic attachment to traditional Middle Eastern borders, many of which effectively no longer exist. So it is contracting out the job to the one country it knows is capable of simultaneously crushing ISIS and quashing (or inflaming) sectarian violence—Iran. This, in effect, would make Iran the main pillar of American policy in the Middle East, based on the belief that, as Hudson Institute analyst Lee Smith put it, “Iran is the best fit for a hobbled and impoverished superpower that is on its way out of the Middle East.”

Another reason is simple defeatism. It is no secret that the United States has lost its taste for long and costly wars. It has no interest in committing the troops necessary to hold the Middle East together. This is coupled with the outdated perception that the Middle East is “over there” and does not directly threaten the U.S.

Thus, the White House may believe that it should simply capitulate to Iranian ambitions—even on the nuclear issue—and assign it the duties America is unwilling to bear. It is even possible that, for those who embrace this fairly cynical point of view, the fact that Iran is an expansionist power seeking total war against its neighbors makes it the ideal regional enforcer, the countries that will be casualties—Lebanon and Bahrain, for example—be damned.

Here we come to the Administration’s hostility to Israel:

Israel cannot possibly play the role demanded by this partially cynical and partially defeatist strategy, because it is regionally hated. Indeed, in the administration’s view, much of what Israel does is, as Kerry put it, the “cause” of the region’s problems in the first place. Israel’s inability to deliver the same results as Iran, coupled with its constant resistance to the Islamic Republic’s imperialist designs, makes Israel an obstacle to the administration’s ambitions.

“From the White House’s perspective … Israel is the source of regional instability. Iran, on the other hand, is a force for stability. It is a rational actor … pursuing its own interests. The White House, moreover, shares some of those interests.”

However pragmatic or realist the administration’s apparent strategy may appear at first glance, it is, in fact, very close to pure fantasy. Should it be implemented, it would be an unquestionable disaster, setting back American interests in the region for decades.

Doran has rightly compared it to President Dwight D. Eisenhower’s courting of Egyptian President Gamal Abdel Nasser in the 1950s, which was also pursued at Israel’s expense. This strategy backfired completely. Nasser simply exploited U.S. overtures to his benefit while continuing to act according to his own ideological and strategic views, leading to a long alliance between Egypt and the USSR. The administration’s failure then, as it is now, was to discount its foe’s ideological motivations.

Read the whole thing. It is long, and does not make for easy or happy reading at all, but it gives us an insight into the mindset of this incredibly naive yet malicious, and extremely dangerous Administration which has led the world to the brink of disaster.