Good News for after the fast

Tisha B’Av is over and normal programming will soon be resumed. But just to give us a little break between the sadness of the last couple of days and the diplomatic and political troubles that are in store for us, here are some good news items.

Since one of the causes of the destruction of the Second Temple was held to be baseless hatred amongst the Jews, it is heartening to learn that today Jews are uniting around Torah:

Former Yesh Atid MK Dov Lipman spoke to Arutz Sheva on Thursday as he participated in an event ahead of the Tisha B’Av fast day of national mourning at the Presidential Residence in Jerusalem.

The event, initiated by the Jewish People Policy Institute, included representatives of Orthodox and non-Orthodox Jewish streams in Israel for a session of joint Jewish learning.

“Here we had a learning session with Jews from all backgrounds teaching Torah, symbolizing that we can unite together, we can put aside things that we disagree about, we can unite around Torah,” said Lipman.

He expressed his hopes that this form of unity can happen throughout the Jewish world, “and in that merit we’ll have the rebuilding of the Temple in Jerusalem.”

A wonderful column by Jonathan Rosenblum in the Jerusalem Post this weekend expressed a similar call for unity:

The current situation also contains hints as to what we must do so that we do not find ourselves asking, like our Sages after the Destruction: “For what was the Land lost?” A nuclear- armed adversary helps to clarify one aspect of our situation: We are all in this together. An Iranian nuclear bomb would make no distinctions between religiously observant and secular, Sephardi and Ashkenazi.

We are being shown that enhancing Jewish unity – so that it is freely chosen, not forced on us from Above – is the imperative of the hour.

In several places the Midrash and Talmud point out that the armies of the wicked King Ahab were successful because there was peace and love between the Jewish soldiers, and they did not speak negatively about one another.

About 20 years ago, Rabbi David Geffen started an organization called Common Denominator to bring the full spectrum of Israeli Jews together by working on common projects. Before he started, he went to Rabbi Yosef Shalom Elyashiv, then the greatest living halachic decisor, and asked him whether just lowering tensions between Jews would be a worthy endeavor, even if it had no impact on any participant’s religious observance.

Elyashiv told him that it would.

Over a period of three years, Geffen also brought about 25,000 secular Jews to visit families in Mea She’arim. When he heard about that aspect of the project, Rabbi Yaakov Weinberg, a major American rosh yeshiva, had tears in his eyes, as he told Geffen, “If you can just teach haredim to love secular Jews as they are, without any connection to kiruv [outreach work], you will accomplish more than all the kiruv groups and might even bring the Messiah.”

Weinberg’s point was that one Jew can influence another Jew positively only if the latter feels that the first genuinely loves him and seeks his good and is not just motivated by a desire that everyone be religious like him.

The key to building that love is to focus on our fellow Jews’ virtues and not spend our time taking their spiritual temperature. Most of us have at least some sense of our many failings.

Yet when we look in the mirror, we tend to place more emphasis on our good points. Loving our fellow Jews as ourselves means defining them by their virtues, just as we do with respect to ourselves.

Rabbi Rosenblum goes on to tell the terrible story of Miriam Peretz who lost 2 sons in Israel’s wars, and yet she has retained her complete faith in G-d and has become a motivational speaker. Rosenblum draws the very appropriate conclusions about the importance of unity amongst the different streams of Judaism:

I cannot fathom how Mrs. Peretz had the strength to read that letter, and even to turn it to a source of optimism to an audience of young women starting National Service. But she did. And with her words she shook me from any complacent assumption that only among the great tzaddikim of my haredi community is such intense faith to be found.

May we all make the effort to get to know one another better, to be alert to the admirable qualities to be found in our fellow Jews, and through the increased love and unity between us merit not only protection from those who seek to wipe us out but also to see the Temple rebuilt and Tisha Be’av transformed from a day of mourning to one of rejoicing.

May his words and the efforts of all these righteous people bring the Redemption to Am Yisrael.

Earliest scrolls of Megillat Eicha (Book of Lamentations) from Qumran

Still on the subject of Tisha B’Av, the earliest Echah (Lamentations) scrolls ever discovered were displayed in the Israel Museum this week:

The Qumran edition of the Book of Lamentations (Eicha) will be on display for a four-day period, the Israel Antiquities Authority (IAA) announced this week, in a special exhibit in honor of Tisha B’Av on Sunday.

The writing on the scrolls dates from 30 BCE – 70 CE and has never been presented to the public until now. The scrolls will be on display in the Bible Lands Museum in Jerusalem until Sunday night.

The exhibition conditions (climate and light) have been specially adapted to allow the presentation to the public while also preserving the fragile document. The exhibit is also under heavy security during its duration to prevent any tampering.

The Qumran scrolls are part of the “on the Rivers of Babylon” exhibit, the world’s first specifically focusing on the destruction of Jerusalem and the Babylonian exile. It reveals for the first time original documents from the time of the Babylonian exile, as well as highlighting the importance of the Dead Sea Scrolls. This collection has been on display since the month of Av began some eight days ago.

The exhibit also includes the ‘Al-Yahud’ collection: a collection of dozens of clay tablets confirmed to have stemmed from the Jewish community in Babylon which chronicles the life of the exiles from Judea and in the land of Babylon for the first generations after the exile.

‘Al-Yahud’ reveals a wealth of crucial information about this little-known period, and the tablets are currently undergoing extensive research from a team of experts from Israel, the US, and Germany. Research on the tablets is ongoing and constantly expanding; experts say that it has opened an entirely new discipline in the field of Jewish Studies and Assyriology.

These finds are amazing both for their historical and cultural impact but more importantly, they go to prove the Jews’ unbroken connection to the Land of Israel – a connection which is repeatedly undermined by those who hate us and try to deny our history. 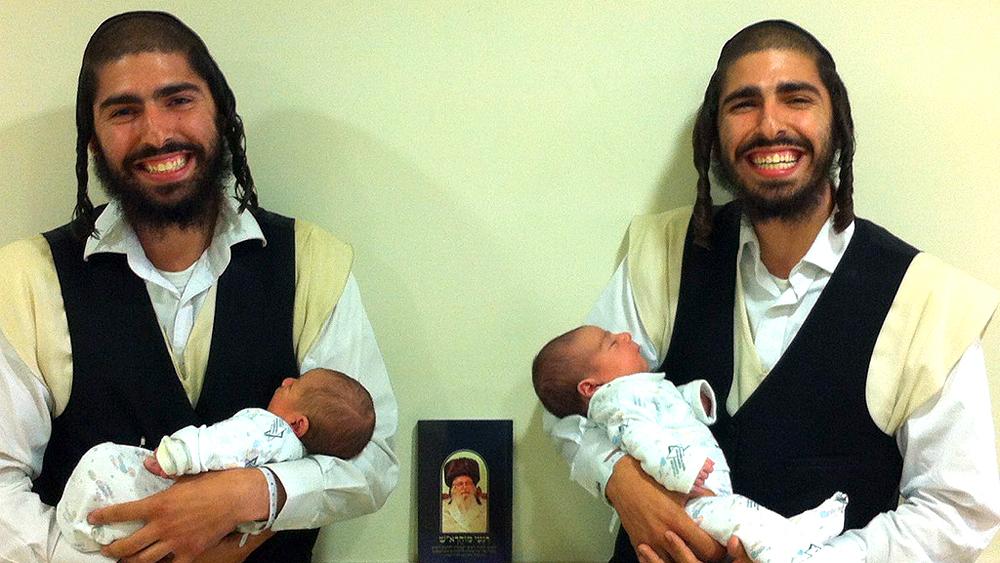 And now for some really good and happy news. In an amazing coincidence – or more likely by Heavenly assistance – a pair of Israeli twins married to twins gave birth minutes apart!

While the newborn cousins aren’t twins, they share quite a bit with their mothers, who were also born twenty minutes apart.

Brothers Niv and Ran Cohen, who assumed a religious lifestyle after joining the Hasidic Breslov sect two years ago, told the news website Walla that their wives’ pregnancies were not coordinated.

The Cohens were mentored by the recently deceased Rabbi Eliezer Shlomo Schick, who introduced the brothers to their wives.

“We always knew the match was heaven sent, but this week we got confirmation,” said Niv, who was married four days after his brother.

The mother of the wives said she’s gotten plenty of exercise over the last several days. “I’ve spent the whole week running in between the two delivery rooms,” she said.

According to the ultra-Orthodox news website Kikar HaShabat, many in Israel’s Breslov hasidic community see the births as miraculous and a sign from God.

The Cohen brothers agree. “We see the Almighty as having bestowed this upon us by virtue of the rabbi,” Niv said, according to Kikar HaShabat.

“Its the best feeling in the world,” he added.

A hearty mazal tov to all 4 twins and the very proud (but tired) grandparents!

The best of Israeli fruit and veg

Israel’s year-round growing season has pushed it past competitors in some of the U.K.’s biggest food markets, the British Daily Mail reported on Tuesday.

Gordon Bickel, the head of Israel’s largest agricultural produce exporter Carmel Agrexco, said Israelis’ ease with European languages (many emigrated from European countries to the Jewish state), the high quality of its fruits and vegetables, and the good weather have given it an edge over many British and Spanish competitors in huge grocery chains like Tesco.

Trade between the U.K. and Israel is at an all time high, at about $7.9 billion. One in seven British National Health Service prescriptions are filled using Israeli-made drugs, the Mail reported.

The U.K. is Israel’s largest trading partner, after the U.S., according to the report.

That is excellent news! Let BDS eat that!

Wishing everyone a good week and let’s hope for more good news.

2 Responses to Good News for after the fast