The Iran deal – emerging details make it worse than ever

The more the Iran deal is discussed in the media, and as news emerged from the debate in the US Senate’s Foreign Relations Committee, the more we realize that there is so much about this miserable deal that we were not informed of in advance.

For example, the advice of the Chairman of the Joint Chiefs of Staff Martin Dempsey was ignored:

The Obama administration ignored advice from Joint Chiefs of Staff Chairman Martin Dempsey regarding details of the nuclear deal with Iran.

Chairman of the Joint Chiefs of Staff Martin Dempsey

That’s according to Dempsey, who appeared before a congressional committee on Wednesday, and said his military advice to the administration was that the U.S. should not relieve sanctions on Iran under any circumstances.

“Just to be clear, when you came before the committee then you said under no circumstances should we relieve pressure on Iran on those issues,” Sen. Kelly Ayotte (R-N.H.) asked the chairman. “So was it your military recommendation that we not agree to lifting of those sanctions?”

“Yes,” Dempsey responded. “And I used the phrase ‘as long as possible.’ And then that was the point at which the negotiation continued. But, yes, that was my military advice.”

Even worse, it emerged that there are secret side-deals between Iran and the IAEA of which Obama was aware but about which he did not inform Congress! Senator Tom Cotton and Rep. Mike Pompeo discovered these side-deals by accident:

President Obama promised that his nuclear deal with Iran would not be “based on trust” but rather “unprecedented verification.” Now it turns out Obama’s verification regime is based on trust after all — trust in two secret side agreements negotiated exclusively between Iran and the International Atomic Energy Agency (IAEA) that apparently no one (including the Obama administration) has seen.

Worse, Obama didn’t even reveal the existence of these secret side deals to Congress when he transmitted the nuclear accord to Capitol Hill. The agreements were uncovered, completely by chance, by two members of Congress — Rep. Mike Pompeo (R-Kan.) and Sen. Tom Cotton (R-Ark.) — who were in Vienna meeting with the U.N.-releated agency. In an interview, Pompeo told me that he and Cotton were meeting with the deputy director of the IAEA and the agency’s two top Iran negotiators just days after the nuclear accord was announced, when they asked how the agency will carry out verification at the Iranian military complex at Parchin. IAEA officials told them, quite casually, that the details were all covered in agreements negotiated between the IAEA and the Iranian government. It was the first they had heard of the side deals.

“We need to see these documents in order to evaluate whether or not verification is ample to make such a big concession to the Iranians,” Pompeo says. “No member of Congress should be asked to vote on an agreement of this historic importance absent knowing what the terms of the verification process are.”

In fact, the Obama administration’s failure to transmit these side deals to Congress is a violation of the law. The Iran Nuclear Agreement Review Act, which Obama signed into law, explicitly states that the president must transmit the nuclear agreement along with “all related materials and annexes.” That clearly covers any side agreements covering the verification of Iran’s compliance.

It remains to be seen whether the revelation of the secret side deals will make it impossible for Democrats to vote in favor of the Iran agreement. How, Pompeo asks, can they explain to their constituents that they voted for a nuclear deal with Iran without knowing how it will be verified?

“My mission in the next 45 days is to convince 45 House Democrats to override the veto,” Pompeo says. “It’s a long climb, but this is important.”

The Administration also dodged responding to claims that Iran would be permitted to self-inspect its nuclear sites:

The Obama administration ducked concerns Thursday raised by senators in a public hearing that Iran would be responsible for collecting its own soil samples to turn over to the International Atomic Energy Agency for inspection of suspected nuclear sites.

Officials would neither confirm or deny the claims, made twice during the Senate Foreign Relations Committee hearing, which heard testimony from Secretary of State John Kerry, Energy Secretary Ernest Moniz and Treasury Secretary Jack Lew.

The disclosure, first by Senator James Risch (R-Idaho) and pressed further by Senator Robert Menendez (D-New Jersey), involved a claim that Iran would be responsible for collecting its own soil samples at a key military site suspected of being used for nuclear-related tests.

“Is it true that the Iranians are going to be able to take the samples [at Parchin] as Senator Risch said? Because chain of custody means nothing [if] at the very beginning what you [are] going to get is chosen and derived by the perpetrator,” Menendez said.

“As you know, that is a classified component of this. It’s supposed to be discussed in a classified session,” Kerry responded, adding that Moniz could brief Menendez about the issue.

“It’s part of a confidential agreement between the IAEA [International Atomic Energy Agency] and Iran as to how they do that,” Kerry continued, apparently defending the terms of the Iran-IAEA agreement. “The IAEA has said that they are satisfied that they will be able to do this in a way that does not compromise their needs and that adequately gets the answers they need.

“I’m not confirming how it’s happening,” he quickly added. “I’m saying that we are confident that the IAEA has the ability to get the answers that they need.”

Kerry’s comments indicated that issues such as chain of custody for soil samples and other elements of the inspections regime under the new deal are set by the so-called “side deals” reached between Iran and the IAEA.

After the existence of the “side deals” was revealed earlier this week, the State Department assured lawmakers that they would be briefed on their contents in closed-door sessions. One such session was held Wednesday, and it is possible that the soil sample clause came up during those discussions.

#Iran is to do 'self-inspection' at Parchin. Like letting rapist do the DNA testing on his victim. http://t.co/C8xVb5MHPh #irandeal

Veteran comedian Jackie Mason sees the situation more clearly than the US Administration:

As for Administration claims that 99% of the world want this nuclear deal, the statistics say otherwise:

When Obama says "99%" of the world supports the Iran deal, is he writing the Sunni Arab states out of the world? Strange overstatement.

Rallies against the deal have been sprouting up across America:

Similar rallies organized by StandWithUS with over 700 protestors each have occurred in Toronto and San Diego. The California protests coincided with the Jewish observance of Tisha B’Av. Regarded as the saddest day on the Jewish calendar, Tisha B’Av marks the anniversary of a number of disasters in Jewish history, primarily the destruction of both the First and Second Temples in Jerusalem. 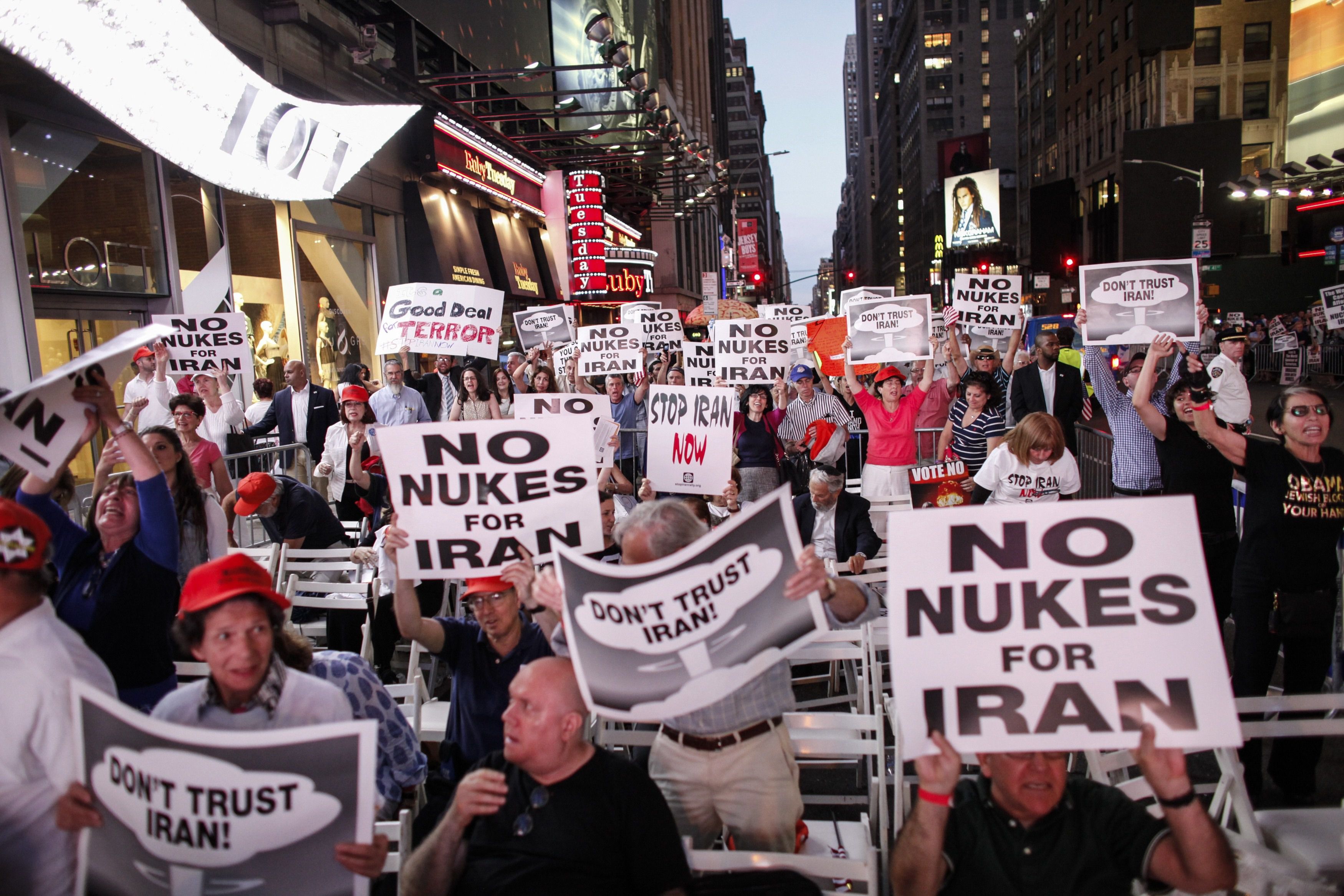 More than 12,000 people called for Congress to reject the agreement with Iran at an overflow rally in Times Square held during the evening rush hour on Wednesday, July 22. Originally planned for two hours, the rally actually took three hours in order to accommodate the long list of political, military, and community speakers.

The Administration in its desperation has even gone as far as fabricating Israeli support for the deal when the exact opposite is the truth.

One piece of gossipy news might go further than all the analyses of the motives of Obama and Kerry to rush to finalize this deal. The website of former Rep. Allen West reveals a very interesting family connection of John Kerry:

Gee, do you think Secretary Kerry should have recused himself from the negotiations with Iran at the very outset because of his long-standing relationship to his Iranian counter-part, Mohammad Javad Zarif? Let me explain.

Zarif is the current minister of foreign affairs in the Rouhani administration and has held various significant diplomatic and cabinet posts since the 1990s. He was Kerry’s chief counterpart in the nuclear deal negotiations.

Secretary Kerry and Zarif first met over a decade ago at a dinner party hosted by George Soros at his Manhattan penthouse. What a surprise. I have to say, connecting the dots gets more and more frightening.

But it gets even worse. Guess who was the best man at the 2009 wedding between Kerry’s daughter Vanessa and Behrouz Vala Nahed? Javad Zarif’s son.

Does this bother anyone at all?

Apparently not in the Administration. Nor this:

This is the grim reality we face:

.@TheIranDeal @JohnKerry And this is the reality if we do pass this bad deal. pic.twitter.com/Yartq1paVg

We must all join together to oppose this terrible deal and get it cancelled.