First the bad news, then the good

As a public service to my readers, here is a (partial) list of the latest terror attacks committed by Palestinians against Israelis in the past week. You can be quite sure that unlike the arson attack in Duma in which baby Ali, and yesterday his father Saad Dawabshe, were tragically killed by unknown assailants, these attacks will not have been mentioned anywhere in the international media. I am quite prepared to stand corrected and amend this post if anyone can point to an article in the foreign media reporting on these incidents. Obviously I am not even going to bother reminding anyone to check the websites of the UN, Amnesty or any of the multiple NGOs that focus on Israel’s alleged misdeeds with a mega-microscope whether they have condemned these latest terror attacks.

Last week I mentioned the firebombing of Israeli motorists in their car in Jerusalem. Arutz Sheva has more details report plus a video:

A video on Youtube shows the car of Uri and Inbar Azrak as it rolled into Jerusalem’s Beit Hanina intersection, near the Ben Tzion Interchange.

Uri and Inbar were no longer in the car when the video was shot.

Inbar, 27, who was wounded in Monday night’s firebomb attack, spoke out about her ordeal Tuesday.

“We were returning from Jerusalem from a vacation, my husband Uri and I,” she recounted to Army Radio. “Suddenly we heard a very loud ‘boom.’ The car was filled with fire.”

“He shouted at me: ‘get out! get out!” she continued. “I struggled and finally managed. Uri helped me extinguish my skirt, lay down and call for help. I asked someone to call an ambulance.”

An IDF soldier rushed to the scene; Inbar added that, thankfully, others also stopped to help – due in part to the fact that the attack unfolded on a main road.

Thank G-d that incident ended with “only” moderate burns. Two IDF soldiers were not so lucky on Friday when a Palestinian rammed his car into them as stood on the roadside near Shilo. However the terrorist did not escape – the third soldier shot him:

A Palestinian terrorist struck and wounded three soldiers as they walked with their unit on the side of Route 60, near the Shiloh junction in the West Bank around 3 p.m. on Thursday.

Two of the soldiers were seriously wounded, and were transported – one by helicopter and the other by ambulance – to Hadassah University Medical Center in Jerusalem’s Ein Kerem. The third soldier, Lt. Daniel Albaz, was taken to Beilinson Medical Center in Petah Tikva where he described for reporters how the white four-door car plowed into them.

“I understood that it was a terror attack,” he said with his arm in a cast. Albaz explained that he was able to shoot the Palestinian driver, whose vehicle then flipped over. The driver, who was seriously wounded, was taken to Shaare Zedek Medical Center in Jerusalem.

As for the claim that these attacks are committed by “lone wolves” belonging to no organization (a claim never applied to alleged Jewish terror), Hamas and Islamic Jihad were quick to praise the attack, thereby encouraging even more attacks:

Hamas and Islamic Jihad praised the terrorist attack as a “heroic act” and called on their members in the West Bank to escalate the violence against Israelis.

Hamas spokesman Abad Arahim Shadid said: “We praise this heroic terror attack made against the Zionist.” He added that Hamas considered the attack “an appropriate response to the arrogance of the enemy and its crimes against prisoners, al-Aksa mosque and babies.

“We call upon the members of our people in the West Bank to carry out more terror attacks so that the occupiers will learn a lesson.”

A senior Islamic Jihad official also lauded the attack, saying that “this heroic terror attack needs to teach the occupier the price of their terrorism and aggression against babies and against the Palestinian people and its holy places.

Binyamin Netanyahu noted the hypocrisy of the world community:

“I find it strange that those who were quick to condemn terrorism against Palestinians are silent when the terrorism is directed at Jews,” the prime minister said.

The US condemned Monday’s Jerusalem attack, but the international community has not followed its lead.

This evening an Israeli was stabbed by a group of Palestinians at a gas station on route 443, one of the two main roads from Jerusalem to Tel Aviv. One of the attackers was shot and killed, the others fled:

An Israeli man was lightly wounded in a stabbing Sunday night in the West Bank. The Israel Defense Forces said that the man, aged 26, was set upon by a group of Palestinian assailants at a gas station on Route 443, near Modiin.

The IDF said troops opened fire at one of the suspects in the group in order to prevent his escape. He was confirmed dead at the scene by Israeli medical personnel.

The Israeli fled the attack, arriving at a nearby checkpoint for help. He was taken to Shaare Zedek Medical Center in Jerusalem after Magen David Adom paramedics were called to the scene to provide initial treatment.

The other three men who carried out the attack fled the scene. Israeli security forces began searching the area for the rest of the assailants.

Traffic on the highway was blocked by the security forces on the scene, Israel Police reported.

Let us also not forget the countless incidents of stone-throwing and other firebombings that barely rate a mention in the Israeli media, let alone the international MSM (h/t Elder of Ziyon):

According to Shin Bet, in June there were 98 firebombs thrown by Arabs in June, 50 of them in Jerusalem.

This was lower than the 129 Molotov cocktails hurled in May.

We also mustn’t ignore the almost daily stone-throwing attacks on the Jerusalem Light Rail. Here is a picture of an attack from back in July:

This photo, of Palestinian youths throwing rocks at a Jerusalem light rail train, was taken this weekend. pic.twitter.com/HJ5CtoXJkq

Paula Stern describes these attacks and proposes a solution;

Not a day goes by that I don’t see Arabs on the train. Twice I have been on the train when it was attacked at another predominantly Arab station (once the attack was with tear gas).

Note the size of those rocks in the hands of these Arab men as they prepare to attack…note that it is likely that the window you see in front of you is about to be smashed. […] There isn’t a single train I have been on in months that does not show signs of attacks on at least one (and usually several or even most) on the windows and doors.

My feeling is that for every day the train is stoned, it should not stop in these areas for TWO days. Yes, they will continue to stone the train…or maybe, just maybe, the many Arabs who use the train every day and are not stoning it, will get up and stop these men from attacking because when they don’t show up for work, they won’t be paid; when they miss an appointment, they’ll have to wait for a new one. Only when they stop this from happening in their neighborhoods should the service resume.

This was done…and amazingly enough, as expected, the area was protected once they realized the consequences of harboring criminals and terrorists in their midst.

And to top it all off, we are still seeing a persistent drip-drip of rocket fire from Gaza.  The latest rockets were this last Friday:

Terrorists in Gaza fired a rocket into Israel on Friday afternoon, where it struck the Eshkol region.

According to Yediot Aharonot, sirens did not sound in nearby communities; the rocket struck an open field just north of Kisufim, and just inside Israel’s borders.

This is the second attack aimed at Israel from the Hamas-run Gaza enclave in one day. Late Thursday night, terrorists fired three rockets at Israel; all fell short and struck Gaza itself.

A similar incident occurred on Saturday night, when two rockets that were fired from Gaza exploded on the Palestinian side of the border fence.

Reading all this is enough to make one want to curl up and stay in bed until its all over (whenever that might be), but all is not lost:

Now for the good news 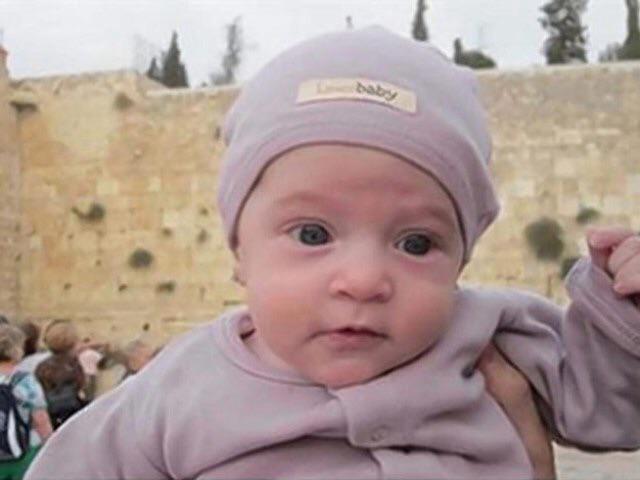 As I was writing this post some wonderful good news dropped in to my inbox (h/t Vered):  The parents of the baby girl Chaya Zissel Braun, who was murdered last year in a Palestinian car-ramming terror attack in Jerusalem, welcomed a new addition to their family as her mother gave birth to another baby girl today:

At the Bikur Cholim Hospital in central Jerusalem on Sunday a baby girl was born to the Braun family, whose three-month-old baby girl Chaya Zisel Braun was tragically murdered last October when she was run over by a car in a Hamas terror attack.

The birth is particularly special given that the Brauns had waited many years to conceive Chaya Zisel, only to have her stolen from them so tragically soon after she war born.

“The Braun couple thanks the Holy One Blessed be He for everything, and particularly for the birth of their sweet daughter this morning,” read an announcement from the hospital.

A hearty mazal tov to the heroic Braun family on the this wonderful news! I feel like all of Israel should join in the celebration of new life. May her parents and grandparents enjoy lots of nachas from their new baby and may they merit to bring her to Torah, to the Chuppah and to good deeds.

May this be the harbinger of more good news from now on.

One more fantastic update via Sema in the comments (I’ve only been able to turn up a Hebrew edition so far but the headline says it all):

The medic who took care of the Braun’s baby when she was killed is the same medic who turned up to deliver their new baby.  Not only that, but the medic is a Palestinian Arab. Who says life in Israel isn’t interesting?

What an amazing story! There’s no such thing as coincidence…

7 Responses to First the bad news, then the good