Arabs overturning their own preconceptions about Israel

There’s plenty of bad news out there which I will get to in a subsequent post, but for now, here’s some more good news from our Arab neighbours. (All emphases are added by me).

“To all those who think the Persian state (Iran), and the regime of the Rule of the Imprudent,[3] [namely] the dictatorial fascist Persian regime which controls it, is a friendly country, whereas Israel is an enemy country, I say that a prudent enemy is better than an imprudent one. The state of Israel and its various governments have waged more than five wars with the Arabs, yet never in the course of these wars did Israel think to use its nuclear weapons against its Arab enemies. Conversely, if the Persian state, with its stupid, rash and fascist regime that hides behind a religious guise, ever develops nuclear weapons, it will not hesitate to use nuclear bombs against the Arab Gulf states in the first conflict that arises.

“Israel is a friendly state that does not endanger us in the Arab Gulf region and we have nothing to fear from it.

“Hence, I repeat my call to form a Israel-Gulf friendship society, as a first step towards developing and strengthening [our] ties with the friendly state of Israel in the domains of politics, diplomacy, trade, education and military and civilian cooperation. The rapprochement between Israel and the Gulf should be accompanied by a gradual distancing and severance of all ties with the Persian state (Iran) and its fascist Persian regime, now that it has been proven beyond all doubt that the Persian Iranians are involved in acts of terror, destruction and bombing in Saudi Arabia, Bahrain, Yemen, Kuwait and the UAE, and after it has been proven that they incite and support the Shi’ite Houthi rebels in Yemen, and that the Shi’ite Persian Iranian militias are involved in all the hotspots of terror and conflict in the Arab Gulf and the Middle East, such as in Iraq, Syria and Lebanon and throughout the world.

These views are astounding for an Arab writer, especially one who writes for an Arabic newspaper. As Al-Hadlaq himself points out, he will no doubt be accused of:

Zionism, collaborating with Israel, harboring hatred for Islam and Arabism, betraying the Palestinian cause and being hostile towards the Arab ummah.’

Indeed this is not the first time Al-Hadlaq has espoused such views and he has been blacklisted because of them too. Nevertheless, his courage in the face of such adversity – and that a Kuwaiti paper publishes his views – is a very good harbinger of positive change in the region. Let us hope that Mr. Al-Hadlaq has very good security and that he continues to be a voice for peace in our region.

From a slightly different angle, Salman Masalha, an Israeli Druse intellectual, chides the Arab nations for their refusal to face reality, as he writes  in the London-based Saudi paper Al Hayat: “The Israel that Arabs call a “false entity” is the most stable advanced country in the region“:

“Uttering the name ‘Israel’ has not been easy for Arabs, from their leaders to their mouthpieces to their intellectuals. Israel’s name is sometimes written in scare quotes, as part of the attempt to ignore the reality that writers see on the ground. Dealing with this reality has become a kind of rhetorical contest in Arab discourse; some have not settled for using scare quotes but have gone so far as to ban mention of that name in Arab writing, replacing it with the term ‘the state of gangs.’ Later, the Arab rhetoric became even more impassioned, and to this series [of epithets] was added a new term – ‘the false entity.’ All this arrogant stubbornness in Arab discourse is not ended, and continues to this day, with the addition of such epithets as ‘the deviant state’ or ‘the artificial state.’

In fact, the discourse on Palestine… was obviously no more than a tool used by the Arab leaders to avoid [admitting] that these Arab entities are just as false… And so the years passed, and here we are some seven decades later, during which we were born, grew up, and got old on this plot of land, and what do we see around us? Undoubtedly, any Arab with a smidgen of understanding finds himself facing the same questions: ‘Where are the states of the gangs – and where are the false entities?’

“Just for the sake of inventory, [let us do] some simple math: ‘Yemen the Joyful’[2] is more miserable today than it was before independence. Libya, another false entity, has returned to its roots and to the tribal divisions that predate its establishment. The ‘false Iraqi entity’ has [also] broken down to its sectarian and ethnic groups. The ‘false Syrian entity’ has broken down as well, and has been extinguished in a sea of blood and crimes [perpetrated] by the ‘resistance’ [axis, i.e. Syria, Iran, and Hizbullah], with no redemption in sight.

“As for Lebanon… This Lebanon, with its tiny territory and large population, cannot [even] choose a president…

“As for Palestine – it, like Israel and the rest of the countries in the region, is also a ‘false entity’… Many years ago, two entities began establishing themselves on the ground, one in Gaza and one in the West Bank. Today, decades later, the Palestinians are finding that their problem is no longer ‘the primary Arab problem’ and that their Nakba is no greater than other Arab Nakbas, because Greater Syria [for example] has experienced a far greater Nakba that overshadows their own.

“…  If we look at what is happening around us in this region, we will see that the most stable entities are not Arab, and that they are strong and developed entities – from Iran through Turkey to what Arabs call ‘the false entity’ and the world calls ‘Israel.’

While not calling for a rapprochement or even normalization, it is significant that an Arab is reproving other Arabs for their refusal to face facts. For without facing up to reality and accepting that Israel is both a legitimate entity and that it is here to stay permanently, peace will never be attained or last longer than the next military coup. 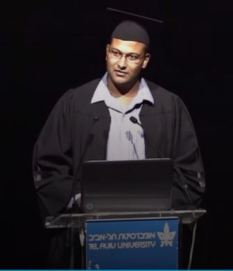 Saving the best for last, the greatest item of all that I read this week is the JPost’s “An unexpected surprise: Haisam Hassanein, an Egyptian-American international student at Tel Aviv University, had all his preconceptions about Israel overturned during his year of study in Israel and was the valedictorian of his class at Tel Aviv University.

There’s war there! Aren’t you afraid of being blown up? Do they even have water there? Do Jews speak English? If you think you heard a million reasons why not to come to Israel, I heard a million and a half. Growing up in Egypt, my entire country had opinions about Israel, and none of them were positive. All we knew was that we had fought bloody wars, and they were not like us.

My exposure to Israel was through music and television. On the radio, there were anthems about the destruction Israel had caused. In the movies, Israelis were spies and thieves, and in spite of the fact that our countries struck a famous peace accord in 1979, the Israelis, I was told, were our worst enemies.

A recent Egyptian action film called Cousins, a box-office hit, told the story of an Israeli spy who married an Egyptian woman and had a family with her, only to kidnap her and her children to Israel. When I told my mom I was coming to study in Israel, she was understandably terrified that I would get a girlfriend.

I arrived to Israel knowing only what I had learned in the movies and in the media. So, at the airport, when the security official asked why I decided to come here, I half-joked, “I always heard the Jews are bad people, and I came to see this for myself.”

I expected to find that people here were unfriendly, and especially unhappy to meet Egyptians. I was pleasantly surprised to find just the opposite. I was invited everywhere, from Shabbat dinner, to Ramadan Iftar meals, to plays and even to political gatherings. And the diversity I found here was as surprising as the warmth of the people.

How fascinating is it to be in a country where you can to go a beach and see a Muslim woman, a gay couple kissing, and a Hassid sharing the same small space? Where else can you find a Christian Arab whose apartment is decorated in posters of Mao and Lenin? Where else can you see a Beduin IDF soldier reading the Koran on the train during Ramadan? Where else can you see Ashkenazi and Mizrachi Jews arguing about whether or not Ashkenazi families had kidnapped Yemenite babies in the 1950s? To be sure, my experience here has been defined by the unexpected.

While traveling beyond Tel Aviv, one can not help but notice the proximity of kibbutzim to Arab villages, and the easy relationship they seem to share with each other.

Perhaps the greatest revelation of my being here was that in spite of all the conflicting histories and identities, people are still able to live their daily lives in a spirit of cooperation.

I often reflect on the strangeness of coming to this country, where the people I was taught to think of as enemies were transformed into my teachers, classmates, vendors, doctors and guidance counselors. When Israelis ask me, how does it feel for you to be in this country, I have to be honest. I tell them, before I knew you, I didn’t like you. But I never considered that my “enemies” would accept me to their school, to their country, and moreover into their society.

And now the comes the best and most interesting part of this anyway wonderful story:

Interestingly, at the end of my experience, one of the biggest surprises came not from Israel, but from Egypt.

Each year, during Ramadan, there is a special series of soap operas which families all over the Arab world gather to watch after breaking the fast. This year’s soap opera was called Haret el-Yahoud, “The Jewish Quarter,” and it told the story of Egyptian Jews in the wake of Israel’s establishment.

The series deals with questions of identity and politics, and features a cast of Jewish and Muslim characters, and there is even an inter-religious love affair.

As a student of history, I can’t say that the series was perfect, but the depiction of Jews for the first time as human beings, as people with a love of family and country, rather than mortal enemies is nothing short of extraordinary. And while Egypt has a ways to go before accepting Israel as a friend, perhaps this series will inspire more Egyptians to at least be willing to rethink “the enemy.”

Tablet Magazine has a video of Hassanein’s speech:

What an extraordinary speech from an extraordinary young man! May Hassanein’s experiences go with him as he returns to Egypt and may he become a goodwill ambassador to bridge the gap between our countries and help bring us closer to a real peace.

4 Responses to Arabs overturning their own preconceptions about Israel