Last week I wondered whether Binyamin Netanyahu was getting more serious about fighting the growing terrorism in Jerusalem, on the Temple Mount, and elsewhere in Israel.  Amongst the measures proposed were the relaxation of the rules of engagement of the police to allow them to use low-velocity live fire against the terrorists and stiffer penalties in court,

Unfortunately, in the week that has passed since Rosh Hashana with its accompanying violence, the number of incidents of stone throwing on Route 443, one of the two main Tel Aviv-Jerusalem highways, has davka increased by 50%  (Hebrew link).

It also ought to be noted that the violence over the weekend included rocket fire from Gaza, although with no injuries thank G-d.

For an idea of what has been taking place over the last few days, Jerusalem Online reports there have been 136 stone-throwing incidents in Jerusalem alone – this is not to mention all the dozens of stone-throwing attacks in other places in Israel as well as arson of forests, firebombings and general mayhem. Here are a couple of pictures via Twitter.

We cannot go on relying on miracles. Sadly, that is what Israel’s Attorney General thinks we ought to do – just play nice and maybe it will all go away.  He opposes tougher penalties on such attempted murder, and considers that the present penalties are sufficient. How he can say that in the face of the latest mayhem is incomprehensible. Here is a partial list of the weekend’s violence, and another report from Sunday:

Underscoring the prime minister’s comments, a vehicle was attacked by some 15 masked figures with stones Sunday morning while traveling from Tekoa in the West Bank, to the neighborhood of Har Homa in Jerusalem.

No one in the car was hurt, but the vehicle’s windshield was smashed in, while glass and other debris fell on a 1-year-old baby and the other family members.

The family managed to escape, but nearly drove into a pole.

Another group of masked individuals threw rocks at a fire truck near the settlement of Beitar. No injuries were reported in the incident.

On Sunday evening, cars in the settlement of Anatot in Binyamin were pelted with rocks. No one was hurt, but three cars were damaged.

But the good news is that, with the backing of Justice Minister Ayelet Shaked, Netanyahu finally found his backbone, and insisted that the courts must accept harsher penalties for stone-throwers, despite the AG’s opposition:

Prime Minister Benjamin Netanyahu said Sunday that Israel’s justice system must accept the cabinet’s bid to enforce harsher measures against those throwing rocks or Molotov cocktails, including changes in the rules of engagement to more effectively target those caught in the act.

“We can’t accept the principle that in Jerusalem, our capital, or in any other part of Israel, people organize grassroots terror and start to throw Molotov cocktails at passing cars,” Netanyahu said. “That will not become the norm here. The opposite norm will be established — we will prevent you proactively, we will punish you with the full force of the law after the act. This norm we will transmit to every citizen, resident, and judge in Israel. With all due respect to the courts, it is our right and our duty to lay down this norm as we did with sex offenses.”

Kol hakavod to him! Now let’s wait and see if the courts take any notice of the Prime Minister’s orders, and whether he will fold in the face of the Attorney General’s opposition.

Meanwhile Netanyahu’s spine solidified even further as not only did he not accept Jordan’s accusations of Israel’s provocative behaviour on the Temple Mount, but he slammed Jordan for breaching the Temple Mount status quo:

Following Jordanian King Abdullah II’s criticism of Israel over recent violence on Jerusalem’s Temple Mount, Israel reportedly responded to the monarchy and indicated that Jordan itself was allowing the status quo at the site to be broken.

According to a Channel 2 report on Monday, Israel communicated to Jordan that it should not be shirking its own responsibility at the Temple Mount and that it was in fact the Jordanian Waqf that has allowed the rioters who were armed with stones to sleep in al-Aksa Mosque. 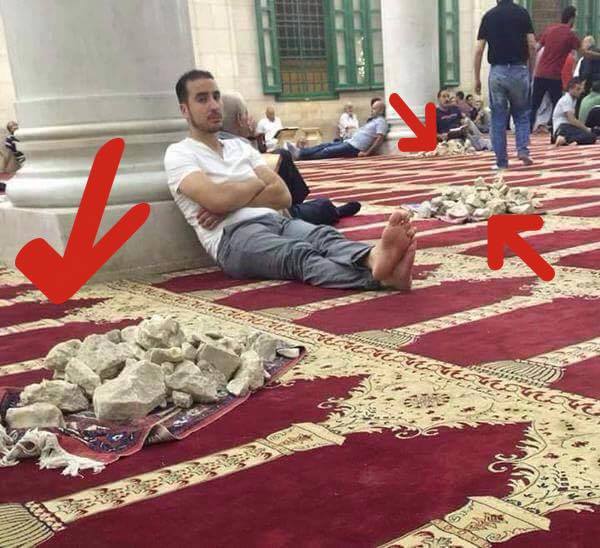 Abdullah on Sunday indicated to a visiting delegation of Arab MKs from the Joint List that he was following events on the Temple Mount closely and it would be an important subject in meetings with world leaders at the UN next week.

The king told the delegation of five visiting Joint List MKs that the Aksa Mosque was a place for Muslim prayer, with no division or partnership.

Let’s hope that Netanyahu’s new-found courage and stiffened resolve will hold up throughout the long days until calm can be restored in Jerusalem and the rest of Israel once again.

4 Responses to Netanyahu finds his backbone in confronting Palestinian violence