Status quo violated at holy site in Israel – and the world is silent (hint: it’s a Jewish holy site)

The status quo on the Temple Mount has become something of a holy grail (if you excuse the expression) to the international diplomatic community as well as the media. Any whiff of Jews violating the hallowed status quo – whether this is in fact true or, as is the case in 99.9% of cases, a made-up lie, a blood libel almost –  incurs the wrath of the nations on our miserable heads. The end result of such libels, besides the obvious UN resolutions and calls for restraint from our “allies” is what we are currently seeing – an intifada in all but name.

But some holy sites are more equal than others. On Thursday night, a Palestinian mob set fire to Joseph’s Tomb in Shechem (Nablus), causing damage to the women’s prayer area:

The majority of worldwide reactions were:

" total silence about this [torching Joseph's Tomb] in the UK and on Al Jazeera. Just imagine if Jews had set al Aqsa alight." 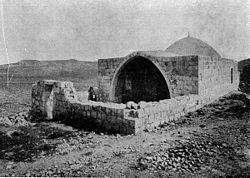 Kever Yosef in the 1860s. Shechem, Nablus, is nowhere to be seen in the vicinity)

The Palestinian Authority claimed that they helped to defend the site, but according to a leading Jewish activist, that is a pathetic media ploy. He also explained the background to the original status quo so beloved of international experts, and how it has changed for the worse for the Jews:

David Ha’ivri, a leading figure in Samaria and a resident of Kfar Tapuach, spoke to Arutz Sheva on Friday morning about the arson attack the previous night against Joseph’s Tomb in Samaria’s Shechem (Nablus).

In the attack, around 150 Arab rioters lit the tomb of the Biblical figure on fire, before Palestinian Authority (PA) forces dispersed them by firing in the air and put out the fire.

But the PA’s role in the incident isn’t so innocent, according to Ha’ivri. He began by describing the history at the site which, according to the 1994 Oslo Accords, was to be under full Israeli control – until Arab rioters occupied, desecrated and burned down the site in 2000 amid the Second Intifada terror war.

“The IDF did not return to control Joseph’s Tomb after the riots and Palestinian take-over of the site in 2000 – the same events in which Border Police Office Midhat Yossuf and Rabbi Hillel Liberman were killed,” recalled Ha’ivri.

The IDF instead reduced the Jewish presence to a once-monthly visit, leaving the PA in control. The PA is required to protect Jewish holy sites under its control and allow secure Jewish access according to previous agreements with Israel.

Ha’ivri noted that “not returning to control the site was a political decision of the (Ehud) Barak government, which felt that it was too complicated or costly to control the small compound in the middle of the hostile Area A of the Palestinian Authority domain.” Area A refers to areas designated by the Oslo Accords as being under full PA control.

“Lacking Israeli protection the PA officials decide when and to what level they provide guard to the site to protect it from damage.”

As to why the PA Security Forces chased off the arsonists after initially not preventing the attack, Ha’ivri reasoned that the move was well calculated to try and present the PA as “moderate” amid a wave of Arab terror.

“Had the PA police wished to they could have prevented the arson last night. This sad event seems to be a media promotion meant to show that the official PA government is making an effort to hold back the rage of their population,” he said.

The PA has in fact actively called for more terror attacks, belying the late response to the arson at Joseph’s Tomb.

So what has the world’s reaction been? Some reactions were absurd to the point of comical:

Is there some sort of secret competition among headline writers for who can best obscure violence against Israelis? pic.twitter.com/85mwP8pcuc

I should note: there is absolutely no dispute over how the Jewish holy site "caught fire." 100-150 Palestinians tried to burn it down.

And a particularly evocative analogy:

Jewish holy sites are, of course, known to spontaneously combust all the time, a particular problem in 1938 Germany. https://t.co/fv4p3HJlEI

However, there were some thorns in Ban’s statement, in which he cast doubt on Israel’s commitment to uphold the “inviolable” (except when against Jews) status quo on the Temple Mount:

He accused both sides of escalating the tensions through their fiery rhetoric and called on all parties to work to restore calm.

While Ban’s representative welcomed Israeli Prime Minister Benjamin’s Netanyahu’s repeated statements that Israel does not intend to change the status quo at the Temple Mount, he said statements were insufficient, as growing movements within the Israeli right were seeking to expand Israeli control over the compound, and were promoting their agenda through words and actions.

Jerusalem, he said, needed to do more on the ground to assure the world that it was committed to the status quo.

The Israeli government has repeatedly denied any intention of altering the status quo on the site, the holiest in Judaism and third-holiest in Islam, where Jews are currently permitted to visit but not to pray.

How many times does Israel have to repeat that it has no intention of changing the status quo? It occurs to me that the more we deny, the more we sound like liars. I propose that the government should from now on retain a stony silence in the face of these accusations, and just laconically refer the accusers to previous denials. It makes no difference anyway. They either don’t believe us or don’t WANT to believe us.

The audacity of these accusations is exacerbated all the more on the realization that the international community itself wants to violate the status quo, as a French resolution has called for international observers to keep the peace on the Temple Mount. The chutzpah!

Thankfully, the Israeli government rejected this malign proposal out of hand with an expression of well-deserved outrage.

“Those who brought in explosive devices and threw fireworks were Palestinians who turned the Temple Mount into a terror warehouse,” Netanyahu said. “Israel is upholding the status quo [at the site] and is committed to that.”

“The French proposal to place international observers on the Temple Mount is distorted and biased,” said Erdan, in language that echoed the comments by Netanyahu. “We are currently working with the US to thwart it.”

“Israel has been and will continue to be committed to the status quo. Those who wish to install international observers are rewarding Palestinian violence and undermining Israeli sovereignty.”

Adding insult to injury, a status quo that has existed for two millennia is the next target for violation by the Palestinians. They now want UNESCO to declare the Kotel, the Western Wall, a part of the Al-Aqsa mosque and to rename it “al-Buraq Plaza”!!

Six Arab states are set to submit a proposal on behalf of the Palestinians to the UN’s cultural body to officially claim the Western Wall as part of Al-Aqsa Mosque compound (the Temple Mount), Israel’s Ynet news website reported Friday.

The proposal will be submitted in the coming days to … UNESCO, by Algeria, Egypt, Kuwait, Morocco, Tunisia and the United Arab Emirates, Ynet said. The Palestinians are not members of the body’s executive council, and therefore rely on one of the 58 member states to submit the proposal.

Ynet quoted senior Israeli sources as saying that the Palestinians are also seeking to submit the proposal in parallel to the UNESCO plenum, where they are recognized as a state.

In an unbridled inversion of the truth the Palestinians project their own crimes onto Israel:

In addition, the Palestinians seek condemnation of ongoing Israeli archaeological excavations near the Temple Mount and the Old City in Jerusalem, as well as for the “aggression and illegal measures taken against the freedom of worship and access of Muslims to Al-Aqsa Mosque and Israel’s attempts to break the status quo since 1967.”

This claim is so outrageous as to almost cause an explosion of mirth, until one realizes that they are deadly serious in their claims, and a willing audience of nations is eager to lap up the lies. It  is scandalous that such a claim can even be entertained in the UN, let alone be written in the records. The Muslim Waqf destruction of priceless Jewish artefacts from the First and Second Temple eras on the Temple Mount has been extensively documented, yet there is hardly a murmur heard in the hallowed halls of international justice.

It is madness that Israel has to expend precious diplomatic capital on preventing or vetoing this outrageous resolution that had no business being accepted for the agenda in the first place – and due to the automatic Muslim majority at the UN, the resolution is in any way likely to pass. They might as pass a resolution declaring “night is day and sky is purple with orange dots”.

A copy of the proposal reveals its main points, which begin with the call “to declare and confirm that the Western Wall is part of Al-Aqsa Mosque, and is called Buraq Plaza. The same applies to the Mughrabi Gate.”

Buraq Plaza refers to the “Al-Buraq” Wall, a name given by Muslims to the Kotel in the 1920s in an attempt to claim it. The name refers to Mohammed’s “winged steed” he supposedly rode to Jerusalem in his “night journey.”

The PA has long tried to revise history and claim the Kotel as the “Al-Buraq” Wall, most recently in a call by PA Grand Mufti Sheikh Mohammed Hussein this August.

For shame!!! And for idiocy. The Muslims are asking UNESCO to change a historically documented site to be named after a fictional mythical winged horse. Who is the sane and who is the insane party in this story?

I find myself cheering the Israeli ambassador to UNESCO’s response:

In response to the bevy of calls in the proposal, Israeli Ambassador to UNESCO Carmel Shama Hacohen accused the PA of continuing the incitement to terror.

“The Palestinians continue to add fuel to the fire of incitement and ongoing terror,” Shama Hacohen said. “In my first speech to UNESCO last year I warned the world’s countries that false incitement by the Palestinians against Israel especially regarding the Temple Mount means playing with fire.

At the last conference in Bonn, I suggested registering the Palestinian culture of lies as an intangible world heritage site.”

A sharp-eyed Yisrael Medad spotted this old news cutting from the 1920’s in which the Muslims were up to the same old tricks – denying the Jewish connection to the Temple Mount and the Kotel:

Meanwhile, in other holy places:

I bet you didn’t hear about that one in your local news media either.

7 Responses to Status quo violated at holy site in Israel – and the world is silent (hint: it’s a Jewish holy site)