The question and answer in my headline might seem a bit harsh, a bit raw, but if you look at the bare facts and study history – the history of the Middle East and the history of the Jewish nation – it is hard to come to any other conclusion.

Bassam Tawil, a Palestinian journalist writing in the Gatestone Institute, bravely asks his compatriots “what do Palestinians want?” – particularly considering that they have no reason to feel deprived or hard done-by:

During the past few days, I had occasion to visit the homes of some of the Palestinian men and women involved in the ongoing wave of terrorism against Israelis — the violence that some are calling an “intifada,” or uprising. 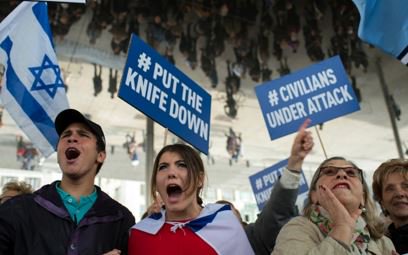 What I saw — what you or anyone could see during these visits — was that none of these Palestinians had suffered harsh lives. Their living conditions were anything but miserable. In fact, these murderers had been leading comfortable lives, with unlimited access to education and work.

Four of the terrorists came from Jerusalem and, as permanent residents who had not applied for citizenship, held Israeli ID cards. They enjoyed all the rights of an Israeli citizen, except for voting for the Knesset — but it is not as if the Arabs of Jerusalem are killing and dying because they want to vote in Israeli parliamentary elections.

These young people took advantage of their status as permanent residents of Israel to set out and murder Jews. They all had Israeli ID cards that allowed them to travel freely inside Israel, and even own and drive vehicles with Israeli license plates. They were also entitled to the social welfare benefits and free healthcare granted to all Israeli citizens, regardless of their faith, color or ethnicity.

Fadi Alloun, “possibly the most handsome man in Jerusalem”, stabbed a random 15-year-old Jew in the street last week. Police shot and killed Alloun moments after the attack.

None of the young Palestinians involved in the recent terror attacks lived a mud house, a tent, or even a rented apartment. They all lived in houses owned by their families, and had unlimited access to the internet. They all carried smartphones that allowed them to share their views on Facebook and Twitter and, among other things, to engage in wanton incitement against Israel and Jews.

To be honest, I envied these terrorists because of the comfortable lives they had. The furniture in their homes is far better than my furniture. Still, their luxuries did not stop them from setting out to murder Jews.

What does all this mean? It shows that the Palestinian terrorists are not driven by poverty and deprivation, as many have long been arguing. Palestinian terrorists are driven by hatred for Jews because of what their leaders, media and mosques are telling them: that the Jews are the enemy and that they have no right to be in this part of the world.

Our conflict with Israel is not about “occupation” or Jerusalem or holy sites or borders. Nor is it about poverty and poor living conditions or walls and fences and checkpoints. This conflict is really about Israel’s very existence in this part of the world. The current wave of terrorism is just another phase in our dream to wipe Israel off the face of the earth. This is not an intifada. It is just another killing-spree aimed at terrorizing the Jews and forcing them to leave this part of the world. It already succeeded in the rest of the Middle East, and is now being done to the Christians as well.

My challenge to you, as the future of Palestinian nationalism, as young people who could be embracing inspiring ideals, is: Are you tapping into the best of your national spirit – or the worst? I know it’s not politically correct to say, but your burst of street violence floats on a sea of lies.

There’s the big inflammatory lie that Israel is changing the Temple Mount’s status quo, which started when Israel finally outlawed the groups bullying Christian and Jewish visitors to the Temple Mount.

Troy goes on to list the litany of lies fed to the Palestinians by their political and religious leaders, and continues in atypically harsh language:

Your violence shows you know nothing about us or our history. We know what it’s like to be beaten, tortured, executed individually and en masse. We have seen it all, endured it all, survived it all. Your strategy of targeting our most innocent at their most vulnerable could not be more counterproductive. It sends us into our trauma vortex, our deepest historical memories that we have sworn never to forget and never to repeat.

Your violence makes us more united, more resolved, more powerful – and, justifiably, less trusting, less cooperative, less open to compromise. Targeting our most vulnerable makes you Amalek, our most hated enemy in the Bible, because these cowards attacked our elderly, our women, our children, not our warriors.

At the risk of sounding crass, you are pikers in this sick game of Jew-killing. Arabs have slaughtered nearly 25,000 Jews in this century-long deluded attempt to destroy us. That heartbreaking number is less than the 33,000 Jews Nazis murdered in two days in Babi Yar in 1941. You think our love of these lives, our mourning for each lost soul, makes us weak? You don’t understand that it makes us strong, it reinforces our resolve not to be victims, not to repeat history’s mistakes, not to cut and run. Every person I know in Israel who has lost a child, a spouse, a sibling to your bloodlust mourns that lost life intensely but supports the Jewish state’s right to live even more wholeheartedly.

Recently, on my Facebook page, I saw a picture of a half-dozen Arab and Jewish nurses, in Beilenson Hospital, holding signs in Arabic and Hebrew saying “we refuse to be enemies.” One of those nurses, Edna Avraham, lost her son Benny 15 years ago, when Hezbollah terrorists kidnapped then killed him on Israel’s uncontested border with Lebanon. If Edna’s heart is expansive enough to let you in – is your younger, supposedly more supple heart equally expansive? Despite your narrative of powerlessness and victimhood, you and your peers hold the future of your state in your own hands. The challenge is clear. I ask the same question Israelis and democrats worldwide have been asking you Palestinians for years: are you more committed to building your state or destroying ours? History teaches that if you wish, you could build your state easily. However, no matter how hard you try, our Jewish, democratic state is not getting destroyed.

We’re not going away. Follow Edna’s path, see the true face of Zionism, show a new vision of Palestinian nationalism: it’s time to choose peace and choose life instead of terrorism and death.

Gil Troy’s wise words are unlikely to be heeded, certainly not by enough Palestinians to form a critical mass that could effect change for the better.

The blogger Abu Yehuda offers one of the most clear-eyed, well-reasoned and logical explanations for this self-destructive behaviour, (warning: it is very harsh and depressing) – and he puts it down to The World’s hate-affair with the Jewish People:

It’s interesting the way the Palestinian issue, of all the possible grievances – including others involving Arabs or Muslims – that the UN could deal with, has managed to capture so much of the UN’s time, resources and personnel. No other issue has as many committees, working groups, divisions, or “special rapporteurs” devoted to it; and no other issue by far is the subject of as many reports and resolutions of the UN’s multifarious fora and agencies. And of course nothing soaks up as much money. This is despite the numerous wars and genocides that have occurred since the UN’s founding which the UN has been unable to prevent.

But it has occurred to me that the UN is only one example of a more general phenomenon: that of Palestinism invading and occupying almost any kind of institution, monopolizing its resources, and preventing it from fulfilling its originally intended function. Instead, affected organizations pass BDS resolutions, sponsor anti-Israel events and speakers, support bogus ‘research’ and ‘academic’ studies, and in general engage in pro-Palestinian anti-Israel political advocacy.

… Even the Jewish community is not immune, with Palestinism – in the form of Ameinu, J Street, Jewish Voice for Peace, Open Hillel, the New Israel Fund, and others – injecting itself into organizations like the Jewish Federations and JCRCs, campus Hillel groups, and even the World Zionist Congress …

But simple counterexamples can be found to the idea that the “pro-Palestinians” are actually motivated by support for Palestinian Arabs. For example, Bashar al-Assad has starved and murdered hundreds of them in ‘refugee camps’ in Syria; and now they are being attacked by ISIS. Little, if anything, has been done by the world – or by any of the above-mentioned Palestinian cheerleaders – to help them. …

I don’t think I have to explain this. The truth is that the impetus for the spread of the Palestinian movement in so many venues does not truly come from sympathy with Palestinian Arabs, except in one respect: their national project to destroy Israel.

The international community’s love affair with the Palestinian Arabs is actually a “hate affair” with their enemy, the state of Israel. …

But we need to take the analysis one step further. What is it about Israel, among all nations, that makes it such a hate magnet? I can tell you that it is a wonderful country, which goes far out of its way – even to the point of endangering its existence – to do the right thing for minorities, especially including Arabs.

No, the problem is not that Israel is objectively deserving of hate. It is because Israel is a Jewish state, and there is nothing that gets the world’s goat more than the despised Jew being successful and thriving. Pharaoh didn’t trust us and made us slaves in around 1800 BCE, the English expelled us in 1290 and the Spanish in 1492. Whenever the Jews start doing too well, the nations start to worry and act against them.

That’s why Jews were kicked out of country after country, why Hitler and Stalin murdered them, and why students at Berkeley – even Jewish students – flock to join Students for Justice in Palestine. Today, thanks to the Internet and Al-Jazeera, Jew-hatred has been globalized.

The Western attitude has little to do with ‘Palestine’ and Palestinian Arabs. It is all about Israel and Israeli Jews. The West doesn’t want to see us strong and vigorous; our good economy, high birthrate and scientific and cultural achievements are a reproach to them. They prefer the Palestinian Arabs with their cruelty, intolerance and misogyny, perhaps because they can feel superior to them.

If nations had psychologists, this behavior would be considered so irrational as to imply a mental disorder.

Abu Yehuda recommends various steps that Israel and the Jewish People can take in order to mitigate this “mental disorder”, but probably the first and most important step would be to face up to reality and recognize the world as it really is, and not how we would wish it to be.

Besides that, as I have said so frequently, we must stand strong and we mustn’t lose heart. As the Israeli song goes, “We survived Pharaoh, we’ll survive this too”.

2 Responses to What do the Palestinians want? Not the end of the occupation but the end of Israel