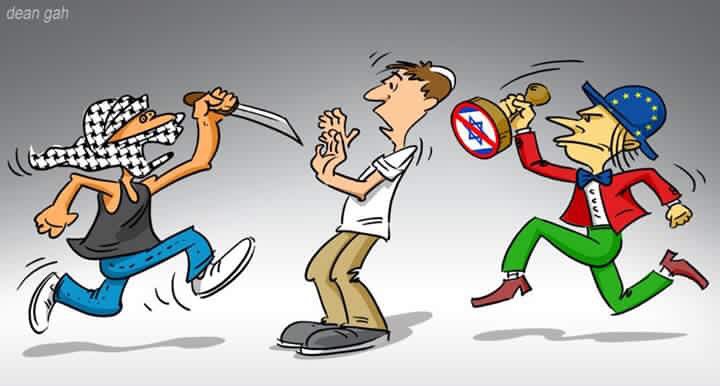 In my earlier post on the EU’s settlements-labelling guidelines, I called it a boycott. However the EU, in reaction to criticism of its  which went into practice today, insist that it is not a boycott, but merely a technical issue, meant to assist people to “make the right choices”. (And if that doesn’t sound Orwellian I don’t know what does).

Two elements of the EU decision have particularly enraged Israeli officials. They see the measures as an effective boycott of Israel and say other cases of long-standing occupation, such as Morocco’s seizure of Western Sahara, are not treated in the same way.

The EU dismisses the suggestion of a boycott, pointing out that it is not telling consumers what not to buy. Those who do not want to buy Israeli settlement goods probably already avoid them, and those that support the settlements may now more actively seek out settlement produce.

But the truth is much more sinister. It turns out that this labelling initiative is indeed a boycott – or at least the prelude to one. And it is not only a preface to a boycott of the settlements, their products and their supporters, but it is the prelude to a total boycott of Israel altogether.

Gerald Steinberg of NGO Monitor expands on this in Israel Hayom in his article “the EU’s Immoral Move”: (emphases are mine):

The new product labeling guidelines published by the European Union on Wednesday will not bring down businesses in Judea and Samaria, the Golan Heights and east Jerusalem. These businesses may lose a few European customers, but the economic damage will not be significant. Britain has had such guidelines in place for several years already, with no visible economic consequences. So why did the Europeans do what they did, and why is it vital that Israel respond?

The move was a political and ideological one, part of a strategy crafted by several European officials, in collaboration with political NGOs, to impose the EU’s will on the Israeli public. …

As part of its effort to dictate Israeli policies, the EU funds groups, often with one-sided political agendas, who involve themselves in the Israeli-Palestinian conflict. In exchange for EU funding, these groups produce “reports” and “analyses” related to human rights and international law that reflect the virulent biases of their leaders and employees. Via this funding, which is provided both directly and indirectly (through aid organizations), European governments enable the continued actions of the same BDS movement they officially oppose.

These groups, such as Christian Aid and the International Federation for Human Rights, engaged in a massive lobbying campaign to push the EU to label Israeli settlement products. This is part of a broader “stages” plan. In their eyes, the labeling of settlement products is the initial move toward a wider boycott of all entities that conduct activities in Judea and Samaria, the Golan Heights and east Jerusalem. The ultimate goal of these groups is a comprehensive boycott of Israel, regardless of its borders.  …

Steinberg suggest several strategies that Israel can and must undertake in order to counter this boycott and nip it in the bud before it takes hold:

It took Israeli governments a long time to realized the EU’s strategy was mostly political, not economic, and to figure out an effective counterstrategy. As in any form of warfare, the counteroffensive must be multi-dimensional. Israel must mobilize allies in the EU — lawmakers, journalists and academics who oppose the cynical exploitation of human rights values. In the U.S., a bipartisan effort has been launched against the EU’s move, and this effort must be supported by Israel. International bodies, such as the World Trade Organization, can be used as platforms to exact a heavy price from the European officials and NGOs (including perhaps even fines on the EU) behind the immoral product labeling move.

Israel has already taken a first step and has not only condemned the move and summoned the EU Ambassador for a dressing-down, but has temporarily suspended all diplomatic dialogue  with the EU. This is nowhere near strong enough a reaction – Israel should halt entirely all diplomatic cooperation with the EU and deny them any role in “peace-making” or any other initiatives. They can’t be allowed to boycott us with one hand and hope to persuade us to give up more tangibles in exchange for a dubious peace agreement with the other.

A guest post by “The Judean People’s Front” at Israellycool echoes much of what Gerald Steinberg says, but also takes a deeper look at the people behind the labelling/boycott initiative, and – surprise! – it emanates from the BDS movement:

With the EU labeling products from Jewish communities in Judea and Samaria and boycotts already in the offing, it is important to look at where this idea came from in the first place.
It should come as no surprise that this idea comes from the BDS movement and one BDS-hole in particular: Fayyad Sbaihat, a former National Spokesman for the Palestine Solidarity Movement:

In the second article in the BDS Handbook that is distributed the BDS “activists” all over the US, Sbaihat explains exactly why BDS focuses on settlements first:

Divestment, which itself is one form of boycott against Israel and its apartheid regime, had been introduced in North America as [a] stepping stone towards a broad, comprehensive boycott of Israel… a limited demand of boycott was the necessary approachto… lay the foundation for the future comprehensive BDS call. (p. 9)

You read that correctly. The BDS movement admits to its activists that calls for a “targeted boycott of settlement products” is merely a strategic move that was necessary to “lay the foundation for the future comprehensive BDS call” against all of Israel! They don’t often say this to outsiders because this would mean they are actually advocating a boycott of the Jewish State and is not just against settlements.

But this is exactly what the BDS movement is all about. It isn’t about settlements or occupied territory, it is about Israel itself.

The post goes on to describe in detail how Sbaihat is an out-and-out antisemite, and concludes:

BDS Leader Fayyad Sbaihat, who literally wrote the book on BDS, not only admits that boycotts of settlements is just a strategy to warm people up to full blown boycotts of Israel, but he openly associates with unabashed Jew-haters like Shabazz and Muhammad and supports their views.

So the next time someone tries to tell you boycotts of the settlements are different than boycotts of Israel itself or that these new measures by the EU have no connection to anti-Semitism, you can tell them the truth and show them these for quick reference:

And here are some reactions to the EU boycott from Twitte:

The EU will specially brand Israeli exports; but not goods from Gaza, which is run by an organisation on the EU's own terrorist list.

Interestingly, there was a nice #BDSFail in Munich of all places! :

And similarly to Kulanu MK Michael Oren’s labelling of EU goods in a supermarket, another Israeli supermarket has removed all European goods from its shelves:

The note reads: “Fairy brand products were taken off the shelf.” Alas, Fairy is made by Procter & Gamble in the UK, which plans to ignore the ban.

The supermarket, which made a big announcement: “Starting today, 11.11.15, all our products are blue and white,” is running a special, 20% off on all the products from Judea and Samaria. And while they were at it, they also pulled the Baracke Tahini brand, made by the Rushdie Food Industries Corporation from the Israeli Arab city of Umm al-Fahm, replacing it with the Har Bracha Tahini.

Umm al-Fahm, which has been part of the State of Israel since 1948, was one of the Arab enclaves that saw rioting and Molotov cocktail throwing over the past couple of months.

The supermarket owner is not religious, and does not live in Judea or Samaria. The initiative to remove the EU products came from an employee, who heard on the news about the EU Commission’s decision to label settlement goods and started to take down European products off the shelves. The owner asked him what he was doing and he explained, and so, in response, the owner ordered him to proceed with the removal of all the offending products.

Good for him! Though I would hope that as time goes on and more details are known, we might get to hear which – if any – EU states object to the labelling, and then their goods should not be boycotted.  See the picture caption above for example.

Given the hypocrisy and the proximity to the anniversary of Kristallnacht, it was obvious  people would make comparisons with the Nazi boycott of the Jews in the 1930s:

EU to label Israeli goods made in settlements, a move some equate to Nazi's yellow star https://t.co/i6OYDXl0jm pic.twitter.com/cxArXEeVqI

But more than that – let us not forget what else happened exactly 40 years ago this week. The UN passed its infamous Resolution 3379 defining Zionism as Racism:

Exactly 37 years after the infamous Kristallnacht anti-Jewish riots in Germany, which occurred on the evening of November 9, 1938, and marked the beginning of the Holocaust, the United Nations (UN) passed an anti-Semitic resolution against the Jewish state, affirming that Zionism is racism.The vote concluded with 72 in favor, 35 against and 32 abstentions.

Then-US Ambassador to the UN Daniel Patrick Moynihan stated, following the passing of the resolution: “The United States rises to declare before the General Assembly of the United Nations, and before the world, that it does not acknowledge, it will not abide by, it will never acquiesce in this infamous act…The lie is that Zionism is a form of racism. The overwhelmingly clear truth is that it is not.”

In his remarks to the UN, then-Israeli Ambassador to the UN Chaim Herzog noted that the passing of the resolution coincided with the 37th anniversary of Kristallnacht (the Night of the Crystals).

Chaim Herzog addressed the UN in one of his most brilliant and evocative speeches – which fell on mostly deaf ears:

This was the night in 1938 when Hitler’s Nazi storm-troopers launched a coordinated attack on the Jewish community in Germany, burned the synagogues in all its cities and made bonfires in the streets of the Holy Books and the Scrolls of the Holy Law and Bible. It was the night when Jewish homes were attacked and heads of families taken away, many of them never to return. It was the night when the windows of all Jewish businesses and stores were smashed, covering the streets in the cities of Germany with a film of broken glass which dissolved into the millions of crystals which gave that night its name. It was the night which led eventually to the crematoria and the gas chambers, Auschwitz, Birkenau, Dachau, Buchenwald, Theresienstadt and others. It was the night which led to the most terrifying holocaust in the history of man,” Herzog stated.

“It is indeed befitting…that this debate, conceived in the desire to deflect the Middle East from its moves towards peace and born of a deep pervading feeling of anti-Semitism, should take place on the anniversary of this day,” he continued. “It is indeed befitting, Mr. President, that the United Nations, which began its life as an anti-Nazi alliance, should 30 years later find itself on its way to becoming the world center of anti-Semitism. Hitler would have felt at home on a number of occasions during the past year, listening to the proceedings in this forum, and above all to the proceedings during the debate on Zionism.”

Has anything changed in the intervening 40 years? Not at all. If anything things have become much worse for Israel and the civilized world. If, as Herzog said then that the UN had been ‘Dragged to its Lowest Point of Discredit’, what would he say now with brutal regimes like Saudi Arabia, Iran and others at the heads of human rights committees, UNESCO and other forums?