Here we are again, another Friday at the end of a horrible week, and yet there are still sparks of light amidst all the gloom – how fitting for Rosh Chodesh Kislev in which we celebrate Hannukah. So here is another Good News Friday installment.

We’ll start with the widely-covered visit to Israel by Boris Johnson, the Mayor of London.  Johnson is famous for his outspoken non-PC views, and he remained true to character during his visit which he appeared to thoroughly enjoy.

From United with Israel:

Johnson’s trip is for business purposes, as 16 tech firms came with the Mayor seeking opportunities in Israel.

The tech firms, together with the mayor, were shown some wondrous technological innovations, such as a device that let’s you experience life as a dog!

Throughout the trip, it would seem Johnson has enjoyed himself, especially as he got to ride try out a scooter.

Let’s hope this marks the development of what will become an exceptional relationship between Israel and London. 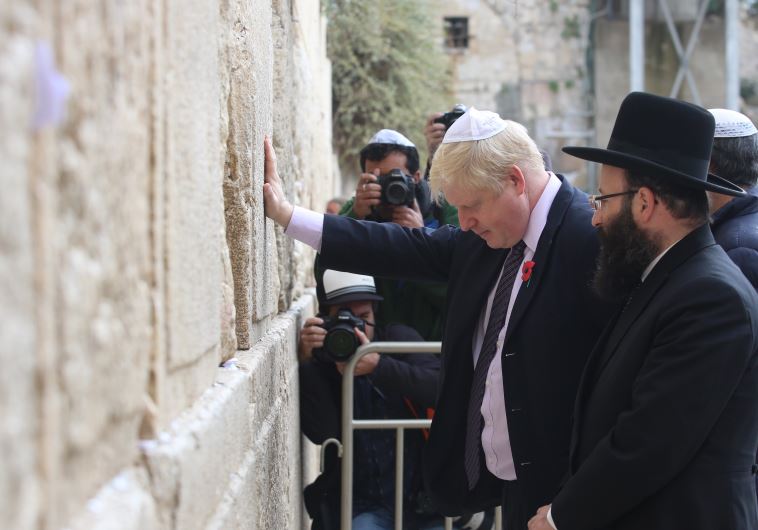 Mayor of London Boris Johnson at the Kotel

And of course, let’s remember that trade is a 2-way street. Israel has got at least as much to offer London as the reverse.  No Camels has more on that subject:

The Mayor, who 30 years ago came to Israel to work on a kibbutz, admitted that he “made a less than spectacular contribution to the Israeli economy, and in order to rectify that, I’ve now brought a very, very serious trade delegation to build on what I think you would agree is a most fantastic partnership between London and Israel.”

After ringing the opening bell of the Tel Aviv Stock Exchange, then cycling down Rothschild Boulevard – dubbed Silicon Boulevard – with Mayor of Tel Aviv Ron Huldai, Johnson made a stop at Google’s Campus in Tel Aviv, where he spoke to a packed house of entrepreneurs, investors, and tech leaders – and tried out a few toys. 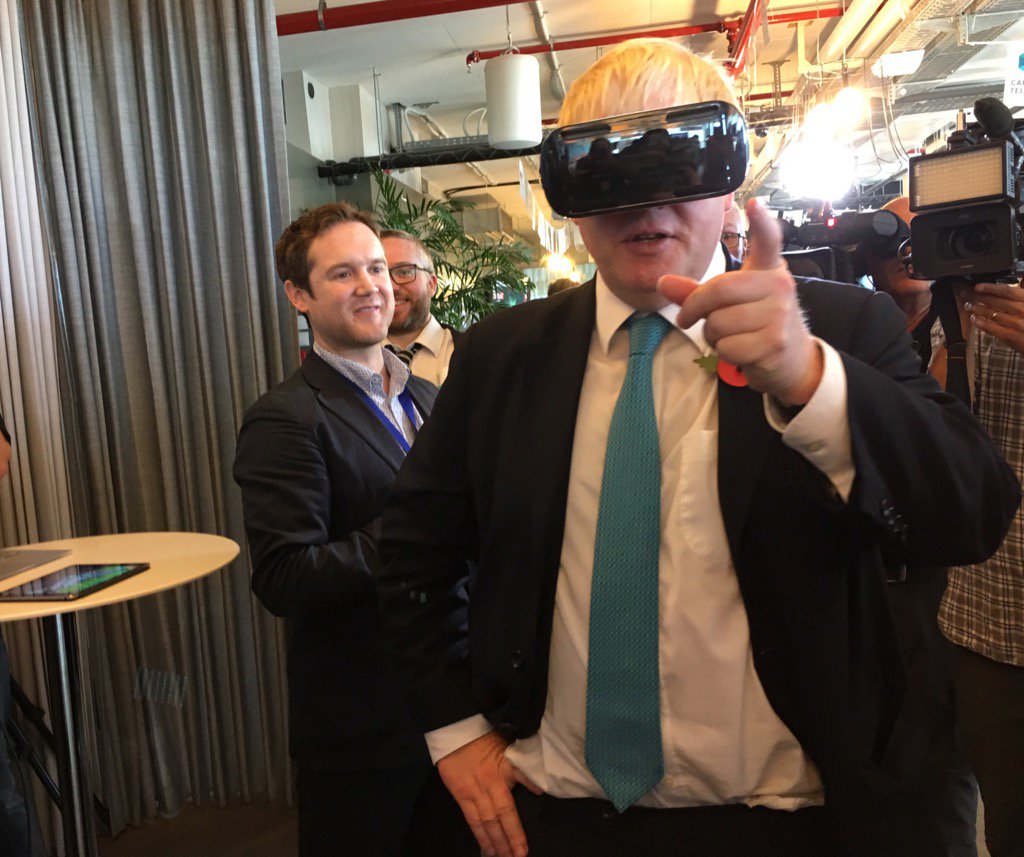 As part of his mission, Johnson praised and encouraged the tech trade between London and Tel Aviv, and invited Israeli entrepreneurs to make London their home away from home. London has a lower murder rate than New York, he quipped, more Michelin star restaurants than Paris, and less rain than Rome. But jokes aside, the London Mayor was quite serious about London’s startup economy. Under his leadership, the city’s entrepreneurial ecosystem has grown from a couple hundred companies to tens of thousands of startups, ranging from those in fin-tech and cyber security to education publishing and e-commerce.

Despite these differences, which most agreed would be an opportunity for further growth, Mayor Johnson was keen to stress the commonalities of the two societies. “There is a reason why both Israel and London have this very vibrant, dynamic innovative culture, and that reason is very simple. They both have young populations who are argumentative, they won’t take what they’re given, they question everything, and at the risk of making an obvious point, they are both democracies,” the Mayor said. “You simply would not have a startup culture anything like the kind we see here in Israel in my view anywhere else in this area at the moment. You can have capitalism without democracy – we’ve seen that I’m afraid. But can you have innovation without democracy? I don’t think you can.”

Boris Johnson was a hit not only in the trade sphere. He scored an excellent point in denigrating the BDS bigots who would boycott Israel, calling them a bunch of lefty “corduroy-jacketed academics”. 😀

“I cannot think of anything more foolish than to say that you want to have any kind of divestment or sanctions or, whatever, or boycott against a country that when all is said and done is the only democracy of the region. Is the only place that has in my view a pluralist, open society. Why boycott Israel?” Johnson told London-based Channel 4 news.

However all was not quite rosy on his visit, which on the other hand proved his point about the foolishness of the BDS bigots.

First, a Jewish Chronicle journalist was banned from attending the meeting between Johnson and a Palestinian women’s group because she is Israeli. Johnson attacked the ban, and it went downhill from there:

A furore has erupted after Noga Tarnopolsky, a correspondent covering Boris Johnson’s visit to Israel and Palestine for the JC, was told by the Palestine Business Women’s Forum she was banned from attending a meeting with the London mayor because she is Israeli.

Mr Johnson’s spokesman, Will Walden, said both he and the mayor were “exasperated” by the demand and felt they had made their disapproval clear to the Palestinian group.

Mr Johnson told Ms Tarnopolsky: “It’s very sad that you can’t come in. Obviously if we get in I will be raising it.”

Stephen Pollard, editor of the JC, said: “This is the reality of BDS. Forget the lies about it targeting institutions rather than people. As this outrageous ban on a journalist for no reason other than her nationality shows, it is about singling out individual Israelis and telling them that they are banned as people.”

What happened next was that Boris Johnson found himself boycotted. Read this fantastic Daily Telegraph editorial:

Boris Johnson has been forced to cut short a visit to Palestinian Authority territory. A Palestinian group he had been due to meet took offence at his strong support for Israel, which he rightly praised as the only full democracy in the Middle East, and at his rejection of calls for an economic boycott of Israeli goods and services.

Those who have taken umbrage at Mr Johnson’s remarks are clearly lacking a sense of irony. One cornerstone of a democratic society is free speech, the willingness to allow someone to say things with which you disagree, without penalty or punishment. Refusing to talk to Mr Johnson over a difference of opinion may thus lend weight to the argument that parts of Palestinian society fall short of the democratic standard set by the state of Israel.

Yet the fault here does not lie primarily with the Palestinian activists […]. The real offenders are the cynical cabal of Left-wing academics, politicians, charities and others outside the region who do so much to encourage Palestinian grievance against Israel and to denigrate Israel’s people and government. It is hard to disagree with Mr Johnson’s description of them as “corduroy-jacketed Lefty academics who have no real standing in the matter”. Indeed, he might justifiably have gone further and noted the whiff of anti-Semitism that emanates from parts of the Left-wing anti-Israel mob.

All I can say is Kol Hakavod to Mr. Johnson on his clear-sightedness and his outspokenness in defence of Israel and of democratic principles in general. I really hope he does run for Prime Minister in Britain and that he represents a return to sanity of the British nation.

Since we’re on the subject of Britain, two very different poll results regarding Israel were published this week. The first was a poll of British Jews (h/t DAP), in which almost a quarter said they would back sanctions against Israel, and 75% said they thought settlement expansion prevented peace.

However, the “good” news is that this poll was organized by Yachad, an extreme-left Jewish organization whose support for Israel is vague at best. It more resembles J Street than the UJA, and therefore I take their results with a large sack of salt. I would like to have seen the questions before I take the results seriously.

Nevertheless a second survey reveals that only 1 in 9 Britons support a boycott of Israel and the majority regard Israel as Britain’s key ally in the Middle East.

So much for BDS!

Speaking of boycotts, I’d love to see the Europeans boycott this little gadget – a disposable mini-charger for your smartphone:

As cellphone manufacturers strive to develop batteries that will last longer, an Israeli start-up is tackling the problem from a different direction – developing a disposable charging unit that can recharge a phone, giving it enough juice to keep going for up to four hours.

It’s not the only solution to on-the-go charging, but at an expected list price of $2.50, it’s likely to be one of the cheapest. “We’ve been getting inquiries from all over the world. People are really excited about the ‘mobeego,’” a company spokesperson said.

The Israeli start-up of the same name designed and is manufacturing the small, disposable mobeego charger, and intends to bring it to market over the next year. The company describes it as “an energy drink for the mobile phone.”

The charger — designed in the shape of a can of Red Bull or Rockstar — will fit any Android or iPhone model, but requires a universal adapter, which will be sold at the same sales points that the chargers are sold for a one-time fee of $5.

Although disposable, the charger – essentially a battery that transfers its power to the device’s power supply – is recyclable, and users will be encouraged to return them to the company.

The company will also soon launch an additional version of its charger, which can charge extreme cameras such as GoPro Hero, Xiaomi Yi and various other extreme cameras, mobeego said.

What a brilliant idea! I’m sure that as soon as this hits the market they will be a huge hit and will be sold out in minutes. I’m already standing in line for my charger!

And now, in a change of pace to finish up this week’s installment, here is a fantastic, miraculous story of survival (h/t SylvainB) – how one Israeli man’s life was saved – by an act of terrorism!

An Israeli man wounded in a stabbing attack in Rishon Lezion last week said the potentially deadly assault actually ended up saving his life: When Daniel Cohen was taken to a hospital with stab wounds to upper body, doctors discovered what could have been a life-threatening tumor in his intestines.

Cohen, 31, recounted the events of the November 2 attack — in which two other people, including an 80-year-old woman, were also wounded — during an interview with Radio Kol Chai on Wednesday.

“I was in the middle of a work day,” Cohen, a kashrut supervisor, said. “I was in the central bus station… I waited for the bus and did not see anything suspicious. Then I walked a few steps and suddenly the attacker lunged at me and strangled me.

“I felt like my neck was going to snap. He took out a knife and tried to behead me. I tried to move him with my hand and then he tried to stab me in the neck. I moved my head so he hit my jaw, near the ear. He pushed me to the floor and stabbed along my left side, in my chest, in my stomach and in my shoulder,” the father of five recounted.

“When Magen David Adom paramedics arrived I was still conscious but when I got to Assaf Harofeh Hospital they put me under. I went into a four-hour surgery. It went well, they took out my spleen and a bit of my liver. My intestines were damaged. As they were treating these organs, they found a growth on my intestine that I didn’t know I had. They cut it out and sewed what they needed to,” he added.

“Thank God, I am now in good condition a week later,” he said. “They said they found the tumor when they were operating. If they wouldn’t have removed it, it could have gotten worse.”

“The terror attack saved my life,” he maintained.

When we talk about the strange ways of G-d not being fully understood by man, this is a classic example. Who would have dreamt that a terror attack could save a man’s life! Baruch Hashem Daniel Cohen survived both the terror attack and his illness. May he have a refuah shlema and continue with a long and healthy life Ad 120!

And with this food for thought, I wish you all Chodesh tov and Shabbat Shalom.