Col. Richard Kemp speaking at the UNHRC in June 2015

The redoubtable British Colonel Richard Kemp, formerly Commander of the British forces in Iraq, has previously defended Israel from accusations of war crimes that were levelled against it by the UN and its assorted agencies, foreign governments, and of course the always reliable (reliably anti-Israel) international media.  You can see him here in action defending Israel after Operation Cast Lead in 2009

And here he is again earlier this year as he spoke at the UNHRC after Operation Protective Edge.

(Both posts linked above have other relevant and very interesting videos on the same subject).

Kemp was recently joined by a group of 11 former army officers, who together formed the High Level Military Group (HLMG)  who spent months investigating the entire 2014 operation in Gaza, and they have now issued their formal opinion. This not only completely exonerates Israel, but it castigates the UN for their false and distorted accusations:

Armies of the world would be rendered far less effective if they were forced to operate under the same restrictions as the IDF during last summer’s Gaza campaign, a group of former military and defense leaders from nine countries claim in a new report released Friday.

Following a months-long investigation into the 50-day conflict, the High Level Military Group — made up of retired generals and defense officials from Germany, Colombia, India, Spain, Australia, the United States, France, the United Kingdom and Italy — found that Israel not only abided by the laws of armed conflict, but far surpassed their requirements, despite damning reports by the UN and non-governmental organizations that accused the IDF of potential war crimes.

The group had already defended Israel’s actions in the Gaza Strip earlier this year, submitting their preliminary findings to the UN Human Rights Commission’s probe into the operation, but the group’s final 80-page report goes far beyond their initial assessment.

“Our findings were diametrically opposed to the UN report,” Col. Richard Kemp, one of the document’s authors and the former commander of British forces in Afghanistan, told The Times of Israel on Thursday, blasting the lack of military expertise by the United Nations commission that investigated the conflict. “The UN report was done too quickly and was done by the wrong people.”

A central issue in all of these reports is that of civilian casualties. One of the problems, the report found, was the UN accepted Hamas’s figures for combatant vs. civilian casualties, which put the ratio at close to 70% non-combatants of the 2,000 or so deaths, compared to the dramatically lower 50% that Israel claims.

The HLMG found Hamas’s numbers to be rife with inconsistencies, such as the “inclusion of duplicate names, incorrect ages, combat-related deaths caused by Hamas or its affiliate organizations, such as in the case of misfired rockets, and deaths not related to the hostilities but classified as such.”

More problematic, however, is that the UN and NGO reports were researched from a human rights standpoint and treated the concept of civilian deaths as inherently wrong, even when those incidents occurred under legally acceptable circumstances, Kemp said.

“Human rights law was not the right set of laws to govern this; the laws of armed conflict are,” he added.

Nevertheless, the 11 former army and governmental officials found that Israel adopted a far higher level of restraint than other militaries, citing Israel’s now famous “knock on the roof” technique of dropping a non-explosive ordnance to alert residents that their building is about to be bombed, the telephone calls and leaflets dropped warning non-combatants to leave the scene of an impending attack and numerous examples of missions canceled due to potential non-combatant casualties.

“That threshold isn’t something other nations could handle,” Kemp said. “We can’t call everyone in Iraq before a strike.”

This standard, which is already beginning to be applied to other armies besides the IDF, is a hindrance to military expediency, Kemp argued. “You can’t achieve that aim and also be effective. It’s why we’re not being effective,” Kemp said, referring specifically to the current coalition campaign against the Islamic State in Syria and Iraq.

As all members of the group were retired, they did not represent their home countries, and Kemp explained that the potential for backlash and threat to their professional reputations kept the group independent and objective.

Though there was healthy discussion during the investigation, Kemp said, the group was united in its conclusions. “This wasn’t groupthink. If there was a person with a dissenting opinion, we would have heard about it,” he said.

The report decries the terror organization’s use of human shields and confirms many of the allegations levied against Hamas, namely that they used hospitals, UN schools, ambulances and other “sensitive sites” in order to force Israel into compromising positions and bring about international condemnation against the Jewish state.

In addition to the military aspects of last summer’s operation, the HLMG focused considerable attention on Hamas’s manipulation of the media, noting both censorship and “proactive fabrication” as tools in the terror group’s PR arsenal.

Here is Col. Kemp describing the IDF as the most moral army:

Col. Richard Kemp explained to the Jewish Chronicle why he and his colleagues felt it necessary to put their reputations on the line in defending Israel:

There was not a single Jew in the HLMG. Not one had any allegiance to Israel, except the recognition that Israel is an ally and an outpost of the West. But every one of these distinguished former military men concluded that Israel had no choice but to defend its people in the way that it did, had adhered closely to the laws of armed conflict, had not committed any war crimes and indeed had gone further than any other country in seeking to protect the lives of innocent civilians. 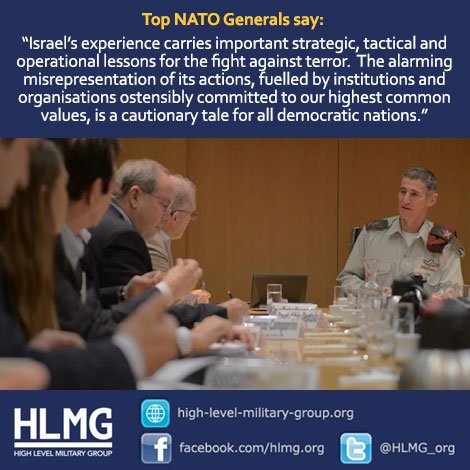 Each of us was prepared to stand up and be counted, to challenge the conventional wisdom on the basis of our extensive experience of armed conflict, and in doing so to put our reputations on the line. Why?

Because we recognised that the systematic challenge to Israel’s right to defend itself is a challenge also to our own countries’ rights to defend themselves. We recognised that the incredibly effective anti-Israel political warfare campaign is just a part of a wider conspiracy against the whole of the Western world, intended to inhibit us all and to lead to our subjugation.

The words “Kol Hakavod” or “thank you” don’t feel strong enough for the gratefulness we should feel towards these brave military men – brave not only on the battlefield but also in the media and the hostile anti-Israel environment with they have tangled.

They are to be applauded for their thorough investigation, their brave conclusions, and their courage in publicizing them worldwide.

Their report ought to be required reading in all the UN and human rights’ institutions around the world. Unfortunately I fear that political correctness as well as  the usual widespread anti-Israel sentiment will prevent the correct conclusions from being drawn.

Let us hope that at least in Western armies the right lessons will be learned from Israel’s bitter experience.

16 Responses to Confirmed by high-level international military experts: Israel did not commit war crimes in Gaza