The return of the annual Christmas Grinch

Despite the fact that any person with eyes in their head and a mind open enough to understand that Christians are amongst the persecuted religions around the world, much of the mainstream media likes to twist the Christmas story as it pertains to present-day Bethlehem in order to portray Israel as the modern-day Herod bent on massacring the innocent Palestinians.

JERUSALEM – Major news media outlets are presenting a misleading picture of the current situation in Bethlehem, blaming an obscure, leaderless “wave of violence” – purportedly instigated by both Israel and the Palestinians – for a downturn in the number of tourists visiting the historic city this Christmas season.

The outlets in question completely ignore the rampant Palestinian incitement that is driving the current violence and fail to report that the pseudo-intifada is instigated almost entirely by the Palestinians.

Also missing from the reportage is the larger story of Bethlehem’s dwindling Christian population. Over the last two decades, Christians have been fleeing persecution at the hands of Muslims.

A case in point is an AFP article republished in numerous newspapers and websites titled, “Unrest puts heavy damper on Bethlehem Christmas festivities.”

The piece reports that “a wave of violence and protests has deterred many tourists from making the annual pilgrimage to the ancient city in the Israeli-occupied West Bank, though much of the unrest has occurred away from Bethlehem, usually considered a safe destination.”

The article does not distinguish between Israeli victims of terrorism and Palestinian terrorists killed by Israelis in self-defense. As the AFP states:

The violence has killed 120 on the Palestinian side, several of them in and around Bethlehem, as well as 17 Israelis, an American, and an Eritrean.

Meanwhile, the Guardian blamed “recent violent incidents” for putting a damper on “this year’s Christmas celebrations in the holy city.”

“Fewer streets were decorated, some festivities were cancelled, and there was no fireworks display, which traditionally marks the lighting of the Christmas tree,” the Guardian reported.  The newspaper did not specify which “violent incidents” it was referring to.

The Guardian noted that progress in Bethlehem is difficult because “82% of Bethlehem falls inside Area C, which is territory under direct Israeli military and administrative control.”

The newspaper, like other media outlets, glossed over a far more important statistic. At Israel’s founding, Bethlehem was 80% Christian. But after the city was handed over to the Palestinians as part of the 1993 Oslo Accords, the city’s Christian population plummeted to 23%. And that statistic includes the satellite towns of Beit Sahour and Beit Jala. Christians now make up only about 12% of the population in the city limits.

What accounts for the Christian exodus?

As reported at WND:

‘As soon as he took over Bethlehem, Arafat unilaterally fired the city’s Christian politicians and replaced them with Muslim cronies. He appointed a Muslim governor, Muhammed Rashad A-Jabar, and deposed of Bethlehem’s city council, which had nine Christians and two Muslims, reducing the number of Christians councilors to a 50-50 split.

‘Arafat then converted a Greek Orthodox monastery next to the Church of Nativity, the believed birthplace of Jesus, into his official Bethlehem residence.

‘Suddenly, after the Palestinians gained the territory, reports of Christian intimidation by Muslims began to surface.

‘Christian leaders and residents told this reporter they face an atmosphere of regular hostility. They said Palestinian armed groups stir tension by holding militant demonstrations and marches in the streets. They spoke of instances in which Christian shopkeepers’ stores were ransacked and Christian homes attacked.

‘They said in the past, Palestinian gunmen fired at Israelis from Christian hilltop communities, drawing Israeli anti-terror raids to their towns.’

There’s much more at the link. Read it all, but maybe after Christmas because it is very depressing.

Mahmoud Abbas, the (Muslim) “President-for-Life” of the Palestinian Authority, similarly called on the world to protect those poor innocent Palestinians from the evil Israelis:

Abbas’s latest accusation came in a “Christmas Message” in which he repeated other charges against Israel, such as the construction of an “Annexation Wall” and the uprooting of “historic olive trees” near Bethlehem.

“Jesus is a symbol for all Palestinians,” Abbas said. “Palestine and its people take pride in being the birthplace of Christianity and having the oldest Christian community in the world.”

Palestinians in Bethlehem, he said, would celebrate Christmas this year “surrounded by 18 illegal settlements and an annexation wall, which are taking over their land.”

This would be funny if it weren’t so breathtakingly hypocritical. Firstly, he makes no mention that it his own people who have persecuted and chased the Christian population out of Bethlehem. Secondly, the security wall and the surrounding settlements are not exactly new. They have been there for decades now. Mentioning them every year is simply inflammatory, not to mention irrelevant.

Abbas went on to say this Christmas comes during a particularly difficult period and that international intervention is “desperately needed to protect the Palestinians.”

Hmm. If they didn’t go around stabbing Israelis or ramming them with cars maybe their situation would be slightly improved.

He accused Israeli extremists of attacking mosques and churches, and said the “twin cities of Bethlehem and Jerusalem have been separated for the first time in more than 2,000 years of Christianity.”

Really he is talking absolute nonsense here. The cities are not twins, and are separate physical and municipal entities. Furthermore each is accessible to the other by public transport. Yes, there are security barriers and roadblocks – which apply to Israelis as well as Palestinians. He is just lying and lying, as per usual.

The PA president stressed that there can be no Palestinian state without Jerusalem as its capital.

And the repetition of that mantra is why there is no Palestinian state at present.

Mahmoud Abbas issued his annual Christmas message yesterday. As he always does, he hijacked what should be a message of peace into an anti-Israel screed.

Throughout the speech, Abbas relentlessly focuses on the anti-Israel theme. He praised churches that practice BDS. He pretends to speak on behalf of the dwindling Christian population to slam Israeli defensive actions near Bethlehem.

But at the end of a speech that is nothing less than hijacking Christmas to slander Israel, he says, “The use of any religion for political purposes is absolutely unacceptable and must be fought.”

Except, of course, by Palestinian Arabs.

As a pointed reminder of the genuine hardship and the reality faced by Jews (and Christians) in Israel, and demonstrating how the pro-Palestinian propagandists have turned reality on its head, here is the “edited” version of an anti-Israel Christmas card designed 10 years ago, but which resurfaces every year, by the anonymous anarchist artist Banksy. 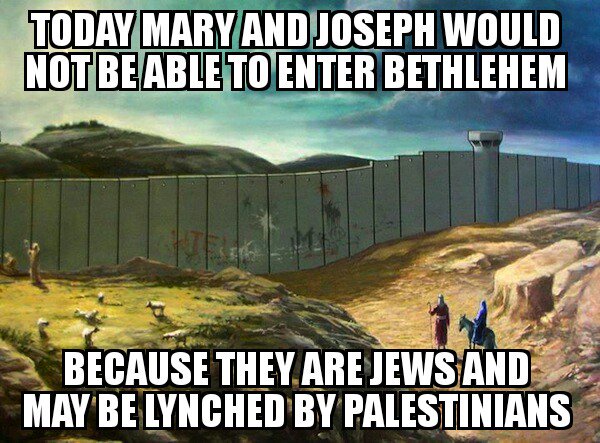 5 Responses to The return of the annual Christmas Grinch