Another week has sped by with its ups and downs, but now it’s time to sit back and relax with a new Good News Friday installment.

First a good dose of schadenfreude to start off the weekend with several important #BDSFails.

Ariel University has won $100,000 in compensation from the Spanish government for discrimination against its architecture students:

Israel won a symbolic victory against the Boycott, Divestment and Sanctions (BDS) movement when the Spanish government recently paid NIS 430,000 in compensation to Ariel University in the West Bank. The compensation was for an incident in which 15 architecture students were barred from an international competition sponsored by the Spanish Housing Ministry because they came “from the occupied territories”.

The payment brought an end to a five-year legal struggle led by the university. The saga began in 2009, when the Ariel University team advanced to become one of 21 finalists in a competition for designing an environmentally-friendly home. The team’s project received an enthusiastic response – in fact, Spain’s housing minister came to see the model house for herself.

Behind the scenes, though, the BDS movement was applying heavy pressure on authorities to disqualify the Israelis because they came from West Bank settlements, resulting in an announcement that the Ariel University team was withdrawing from the competition. [In fact the team didn’t “withdraw”. It was outright banned. -Ed]

Concerned about the decision setting a precedent, the university launched a legal battle, presenting Spain’s Housing Ministry with two demands: cancelling the decision to boot the Ariel delegation from the competition, and paying €230,000 in compensation to the university.

Meanwhile, the Spanish Housing Ministry turned to Spain’s Foreign Ministry with a request for written proof that Ariel University was forbidden from participating because of its location. The Ministry replied that it had no such proof.

The Housing Ministry thus decided to reconsider its stance.

Ariel University decided to accept the Spanish Housing Ministry’s proposal for compensation, bringing an end to the affair. University Chancellor Yigal Cohen-Orgad said resolution of the case proved that efforts by BDS can be overcome.

Excellent news! Well done to Ariel University Chancellor Cohen-Orgad and a grudging thank you to the Spanish government who paid minor compensation for what was a major outrage. #BDSFail indeed.

Another great development for Israel is the announcement that the Tel Aviv stock exchange (TASE) and Nasdaq are building a joint market for Israeli startups:

The Tel Aviv Stock Exchange and Nasdaq, the world’s second-largest stock exchange, announced a joint venture Tuesday to build a private market for Israeli companies that are not yet “ripe” enough to go public. 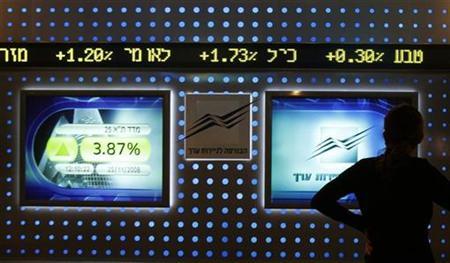 The Tel Aviv-based joint venture, which will have management selected by both exchanges, will offer “strategic counseling and mentoring, exclusive networking, a secondary market for liquidity events and debt financing services,” according to a press release.

“The cooperation with Nasdaq is great news for the Tel Aviv Stock Exchange and the Israeli economy,” said TASE CEO Yossi Beinart. “For the first time we can offer Israeli companies a real solution to challenges in their growth and give them a real alternative to an exit, so that they will continue to operate as independent companies with significant operations in Israel.”

In addition to the joint venture, further details of which will be released in the next six months, TASE will begin using Nasdaq’s Genium INET technology in its trading platform, which allows trading across a variety of asset classes in accordance with international standards. The technology, according to the New York-based Nasdaq, operates in more than 100 markets around the world.

The venture is meant to address a woe regularly cited by the TASE as a sore spot for Israeli companies: a lack of funding options when they’re growing from start-up to fullfledged enterprise.

The cooperation with Nasdaq seems a natural fit; after the United States, Israel has more companies listed on the tech-heavy exchange than any other country in the world.

This is excellent news of course for Israel’s economy and for all the ingenious startups that we produce. Kol hakavod to all those involved in this new cooperative venture, and may it go on to great success!

A new Israeli treatment for fibromyalgia helped 100% of the sufferers who took part in its study:

Women who suffer from fibromyalgia benefit from a treatment regimen in a hyperbaric oxygen chamber, according to researchers at Rice University and institutes in Israel.

A clinical trial involving women diagnosed with fibromyalgia showed the painful condition improved in every one of the 48 who completed two months of hyperbaric oxygen therapy. Brain scans of the women before and after treatment gave credence to the theory that abnormal conditions in pain-related areas of the brain may be responsible for the syndrome.

Results of the study appear in the open-access journal PLOS One.

Fibromyalgia is a chronic pain syndrome that can be accompanied by – and perhaps related to – other physical and mental conditions that include fatigue, cognitive impairment, irritable bowel syndrome and sleep disturbance.

More than 90 percent of those diagnosed with the syndrome are women, said Eshel Ben-Jacob, a lead author of the proof-of-concept study who developed the analytical method used to show the association between patients’ improvement and changes in their brains. He is an adjunct professor of biosciences at Rice University, a senior investigator at Rice’s Center for Theoretical Biological Physics and a professor of physics and member of the Sagol School of Neuroscience at Tel Aviv University.

“Most people have never heard of fibromyalgia,” he said. “And many who have, including some medical doctors, don’t admit that this is a real disorder. I learned from my M.D. friends that this is not the only case in which disorders that target mainly women raise skepticism in the medical community as to whether they’re real or not. However, these days there are increasing efforts to understand the effect of gender on body disorders.”

Researchers at the Sagol Center for Hyperbaric Medicine and Research at the Assaf Harofeh Medical Center and Tel Aviv University were studying post-traumatic brain injury patients when they realized hyperbaric oxygen treatment (HBOT) could help patients with fibromyalgia.

What a fantastic discovery! This could help so many people. Let us hope that further studies produce a standard course of treatment to help the sufferers of this horrible illness that until now have had to suffer almost in silence. Kol hakavod to Dr. Ben-Jacob and all his colleagues who participated in this excellent study.

The second development is a non-invasive blood-sugar test for diabetics. Instead of having to prick their fingers to test their blood sugar, Glucovista, an Israeli startup, has developed a glucose-measuring wristband (h/t Pini):

Israeli medical device company GlucoVista has raised over $2 million in new funding for its glucose monitoring wristband for Type 1 and Type 2 diabetes patients.

Glucovista blood-sugar measuring wristband broadcasts the results to your smartphone

[…] Founded in 2006 by CEO Efraim Landa and CTO Jonathan Gerlitz, the New Jersey-headquartered company is currently conducting clinical studies with hospitals in Israel.

What an ingenious invention!  All the millions of diabetics worldwide will be delighted not to have to prick themselves several times a day to test their sugar. Kol hakavod to all the developers at Glucovista. Now to find a permanent cure for diabetes…

From man’s developments to nature’s glory, here are two fabulous photo essays of migrating birds that are currently sweeping Israel’s skies as they seek warmer climes:

A beautiful set of photos from the Guardian (!) shows the stunning flight formations of starlings as they enter southern Israel: 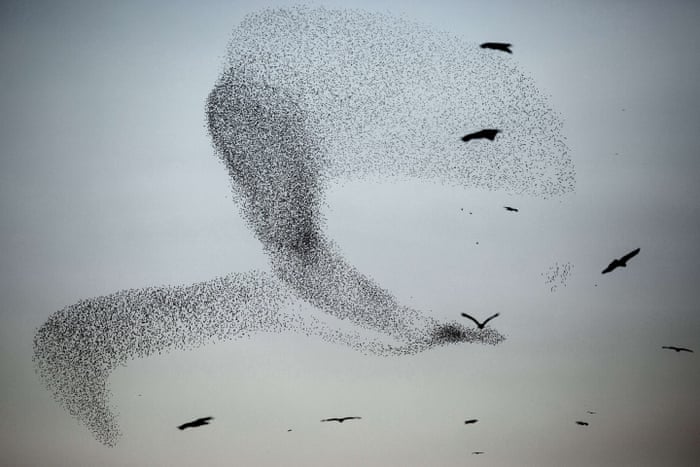 The starlings gather over their roosting site, and perform their wheeling stunts before they roost for the night | Photograph: Menahem Kahana/AFP/Getty Images 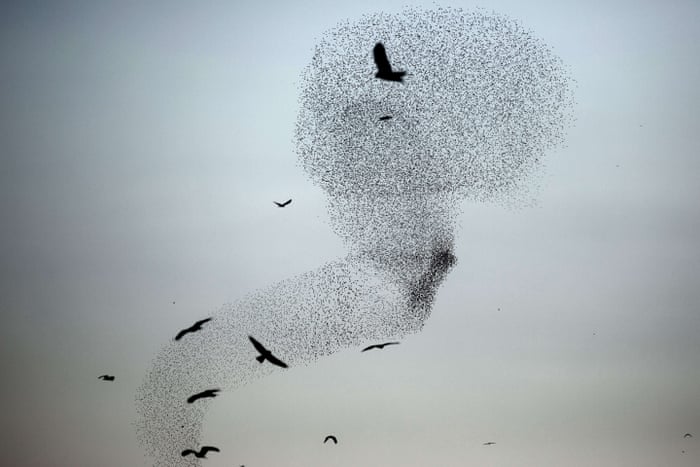 A flock of starlings flies in formation near the Bedouin town of Rahat, southern Israel | Photograph: Abir Sultan/EPA

And up in the north of Israel, in the Hula Valley nature reserve, a similar display of migrating birds was viewed during the Israel Hula Valley Bird Festival:

Israel serves as a land bridge between three continents: Africa, Asia and Europe.

Its diversified climate – from the alpine Mt. Hermon in the north, to the arid sandy deserts in the south – supports many different habitats, which explains how Israel, with its small area, can play host to more than 500 different types of birds.

The Hula Valley Bird Festival, an initiative of the Israel Ornithological Center, aims to highlight the fantastic birding opportunities Northern Israel and the Hula Valley in particular can offer.

Truly we are a blessed country, both in nature and in human resources.

We also love to share our blessings and our humanity with those in trouble, and we can be proud that Israel sent an aid delegation to … England! The north of England has suffered huge floods in recent weeks and IsrAid sent help:

An Israeli humanitarian aid agency has flown a team into Britain to help people flooded in the north of England, it emerged today.

IsraAID flew in a four person team to help rebuild homes and distribute supplies in Leeds after the city was flooded in a Christmas deluge.

The flooded center of Leeds in northern England

The charity, which does most of its work in developing countries, confirmed to MailOnline the work was the first time they have deployed to Britain.

sraAID have responded to 10 disasters triggered by tornadoes and flooding in the United States.

Shachar Zahavi, founding director of IsraAid, told the Jewish Chronicle: ‘The team have already met with small independent initiatives across the north that are delivering food, gutting houses, and helping to rebuild their homes.

‘Our volunteers will assist with the current effort being carried out and use our experience in these disasters to work out what more we can do and how.’

He continued: ‘We have responded to 10 floods and tornado disasters in the US and when we saw what was happening to the UK in the news it looked worse than ever before.

‘We wanted to show the community we would be there for them.’

He said: ‘We got in touch with the Jewish communities around the north of England and they told us about the independent NGOs working on the ground.

‘We contacted them and arranged to send our team to help they said yes and here we are.’

Mr Zahavi added: ‘The first team were greeted by locals with open hands and are now mapping the workloads which would include distribution of goods and gutting houses helping people repair their homes.

We have another team of five waiting to be sent from Israel we just have to assess where they are most needed and what is the best thing we can do to help.’

The River Aire in Leeds hit record levels in the storms, leaving hundreds of homes flooded.

Kol hakavod to IsrAid for sending out an aid delegation to England. Not only are they helping the victims of this flood, but they are making a huge Kiddush Hashem on behalf of Israel.

And that is a great thought to take us into Shabbat!  Shabbat Shalom everyone!