Border Policewoman killed, another injured, in a multi-faceted terrorist attack in Jerusalem

Posted on 4 February 2016 by anneinpt 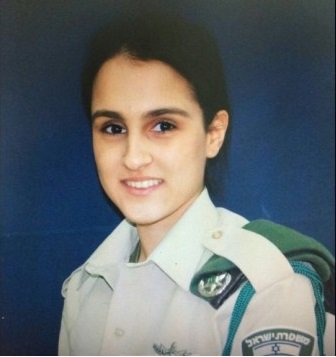 Yesterday afternoon an Israeli Border Police officer, Hadar Cohen, was murdered by Palestinian terrorists, and a second policewoman was badly injured, in an attack at Jerusalem’s Damascus Gate. This attack was unusual in that it involved machine guns and explosives as well as knives, and it was only the heroism of the Border Police that prevented a much worse attack:

A 19-year-old border policewoman was killed and another female officer critically wounded in an attack Wednesday at Damascus Gate by three Arab terrorists wielding machine guns, pipe bombs and knives.

All three assailants were shot dead at the scene. Their explosives did not detonate and were later neutralized by a police bomb disposal team.

The commander of the Border Police team that killed two of the attackers said that he saw two of the terrorists shortly after 2 p.m. sitting on a bench wearing jackets, and that when he approached them they seemed to be uneasy.

He said he asked them for their identification cards, at which point one of them stood up, pulled a gun from his jacket and hit the officer over the head with the weapon.

The officer said he saw the terrorist point his gun at him and try to fire, at which point he said he pulled his service pistol and turned to see an attacker stabbing a woman on the ground.

The officer said he then shot and killed that attacker and then turned to see someone else shooting the terrorist who trained the gun on him.

A police officer at the scene said that he followed a group of people running and saw a man with a black T-shirt who he realized was one of the attackers. He said he and other officers opened fire, stopping the man.

Avshalom Peled, the deputy chief of the Jerusalem police, said that the police do not believe that the Border Police officers were the target and were likely waiting for their real target when the officer approached them.

Border Police Cpl. Hadar Cohen, 19, died of her wounds shortly after being rushed to Hadassah-University Medical Center at Mount Scopus. Her unidentified partner was seriously wounded and underwent emergency surgery there.

Police spokesman Micky Rosenfeld, who was at the scene, described the violence as a planned attack.

…After police cordoned off the area, two pipe bombs were discovered that the terrorists carried but did not explode.

Our bomb disposal experts are being very cautious at the moment to safely detonate them.”

The Israeli police do not think the Border Police unit was the intended target, but rather the terrorists were waiting for a large group of civilians:

Israeli security officials said Wednesday’s fatal attack at the Damascus Gate in the Old City of Jerusalem, in which Border Police officer Hadar Cohen was killed and a second policewoman badly injured, marked “an escalation” in the ongoing terror wave.

The three West Bank Palestinians who stabbed and shot at the Israeli forces had been sitting and waiting for a large group of Israeli civilians to enter or leave the Old City, and had planned to target them, Israel’s Channel 2 news reported on Wednesday evening, citing police sources.

“As far as we can tell from the armaments, [the terrorists] planned a larger, more sophisticated attack,” Jerusalem Deputy Police Chief Avshalom Peled said. “This is an escalation from what we’ve seen thus far. The police officers prevented a combined and much larger attack.”

The new police chief Roni Alsheich, visited the wounded policewoman in hosptial and said that Israel paid a very heavy price to proctect its citizens:

Israel Police chief Roni Alsheich on Wednesday night visited Ravit, a Border Police officer who was wounded in the terrorist attack at the Damascus Gate in Jerusalem while she and other officers physically blocked the terrorists and preventing an even bigger attack.

A second officer, Hadar Cohen, was critically wounded in the attack and later succumbed to her wounds.

Ravit, whose condition has stabilized in recent hours, recounted the moments of the attack to the police chief and told him, “We are here to protect the citizens. This is what we enlisted for and that’s what we are here to do. I have no doubt that Hadar z”l knew this and acted in accordance.”

Alsheich told Ravit, “We are fighting to protect civilians, the price is a painful price, but it’s our job.”

“I have no doubt that a terror cell that comes with an arsenal of weapons of this magnitude – their intention is to carry out a massive attack,” he continued. “Your determination, as well as that of the other police officers and fighters who were there, certainly prevented a major disaster. I salute you,” he added.

Indeed the price that we paid yesterday was very heavy, even more so for the family of Hadar Cohen Hy’d. May her family and friends be comforted amongst the mourners of Zion and Jerusalem and may her memory be for a blessing. יהי זכרה ברוך.

Police Chief Alsheich is correct that Israel needs to pay a painful price, but the fact that this latest attack represents such a marked escalation needs to be addressed by our government. We Israeli civilians do not feel safe any more as we walk the streets or as we go about our daily business anywhere in the country, but particularly in Jerusalem. The police are doing a wonderful job but there comes a time when the political echelon must get their hands dirty. They have to institute new rules of engagement for the army and police, they must be much more pro-active, rather than simply reactive, in combatting this escalating terrorism before it’s too late.

And more than anything else the government has to challenge the PA on its incitement in the Palestinian education system and media.  It needs to demand of the UN, especially UNRWA who run the schools, to completely recreate the educational syllabus and remove all anti-Jewish incitement. If necessary the Israeli government should take over these systems themselves and take on the job of reeducating and recivilizing the Palestinians. Yes, it sounds positively Orwellian, but without reeducating the next generation we – and they – are doomed to endless conflict and death.

Meanwhile the army is surrounding the killers’ hometown of Qabatiya in the Shomron in order to arrest any accomplices of the murderers. How much better it would have been if these killers had not been inflamed by incitement so that this attack would have been stopped before it ever got off the ground.

3 Responses to Border Policewoman killed, another injured, in a multi-faceted terrorist attack in Jerusalem