Posted on 8 February 2016 by anneinpt

A small makeshift synagogue was completely burned together with its holy contents of prayer books and other items in what has been confirmed as an arson attack. Yet the world remains silent, mainly because it has hardly reported anywhere outside of Israel. (AFP do have the story).

A joint police and fire department investigation team confirmed on Sunday that the fire that burnt down the tent housing a synagogue in Givat Sorek was indeed arson.

The town is located on a strategic hill that overlooks the location where the three teenage boys, Eyal Yifrah, Gilad Sha’ar, Naftali Frenkel were kidnapped in 2014.

Residents of the nearby town of Karmei Tzur claim that the arsonists piled up prayer books in the center of the room and lit them on fire. The resulting fire caused the entire structure to burn down.

Charred prayer books at the burnt synagogue near Karmei Tzur

Regional police have opened and investigation into the circumstances surrounding the arson. Footsteps that lead out of the structure have led investigators to the nearby Palestinian town of Halhul.

Sheikh Mohammed Kaiyuan Abu Ali, the chairman of the council of Muslim religious leaders in Israel, spoke with Israel’s Chief Ashkenazic Rabbi David Lau on Sunday after the arson.

During their conversation, the Sheikh condemned the arson, particularly the burning of holy books, noting, “In my name, and on behalf of all imams, we condemn this act and hope another disaster like this doesn’t happen again in any holy place.”

“We hope the perpetrators will be caught and that they will be punished to the fullest extent of the law,” he added.

The pictures are indeed chilling:

Residents said that this is not the first time that the place has been attacked. “It is hard for us to come to terms with the fact that in the heart of the country an act like this occurs which reminds us of some of the darkest periods of our history. It is important to remember that less than 100 meters from the synagogue are people’s houses. This is a dangerous beginning to what can easily become a much bigger tragedy. We need to bring these attacks to an end.”

“These pictures are shocking and send shivers throughout the body. I am certain that holocaust survivors who survived kristallnacht and founded Gush Etzion, never dreamed that they would see such pictures of burned books here in Israel under Israeli authority,”   said David Perl, Head of the Gush Etzion Regional Council on Saturday night. “The government of Israel must get the wild Arab violence, that claims both the lives and sanctity of Israelis, under control.  We expect that the international community will condemn this hateful, shocking and criminal act.”

David Perl’s call for a condemnation from the international community was echoed by Binyamin Netanyahu:

“We are in the midst of a hard battle between those who seek coexistence and peace and those who want war and blood,” Netanyahu said, saying the fire was the result of Palestinian incitement.

He also called on the world to condemn the arson, pointing to international outrage following Jewish extremist attacks on Muslim and Christian holy places.

“I expect all those who justifiably condemn every desecration of a mosque or graffiti or fire in mosques – I expect them to condemn with the same outrage and same condemnation this criminal act,” Netanyahu said.

Meanwhile it turns out that a second synagogue was also the target of an arson attack:

Even as condemnations for the arson at the Givat Sorek synagogue near Karmei Tzur are still reverberating in Israel’s media, a new report has emerged about a second arson where a synagogue and sacred books and articles have been incinerated. According to NRG, a group of soldiers who were training last week in the Yatir Forest, on the southern slopes of Mount Hebron, on the edge of the Negev Desert, ran into the charred remains of what used to be a synagogue in a mobile home.

Burned Tefillin and prayer books at the 2nd burned synagogue

The soldiers believe the mobile home had been stolen from a different location and transported to the spot where it was discovered, between the Jewish community of Shani-Livne and the Bedouin village of Houra. In additional to the burnt books the soldiers also found burnt tefillin (phylacteries) and other sacred articles.

“We were in the middle of a navigation exercise, when suddenly we noticed a charred pile, and relatively quickly realized it was a synagogue that had been burnt down,” one of the Jerusalem Brigade soldiers told NRG. “We found there siddurim-prayer books, sacred books, talitot, tefillin, and even a holy ark.”

Authorities believe the structure was ignited in recent days. Nearby infrastructure work has begun for a new Jewish community, Hiran, whose residents are staying temporarily in the Yatir military camp. There are a few Jewish-owned farms in the area as well.

These antisemitic outrages will most likely not be condemned or even mentioned, at the most receiving a pro-forma condemnation together with a “cycle of violence” mantra, from the international media and governments.

However when Israel does something to improve prayer rights for all at a Jewish holy site, the government of Jordan feels entitled to interfere in Israel’s internal affairs. Now as an Orthodox Jew I’m not sure how much I approve of this mixed gender prayer area. On the other hand, the arrangement was reached as a compromise by all parties, including the Orthodox, and so I welcome this as a peaceful solution to what was becoming a very acrimonious intra-Jewish argument.

Certainly however it is absolutely nothing to do with the Jordanians who have an utter chutzpah in complaining about the arrangement:

Jordan is protesting Israeli plans to expand the Western Wall plaza as part of a landmark agreement that will open the plaza to pluralistic prayer, saying the move will damage ruins of a 7th-century palace that once stood at the site.

Women of the Wall pray at the Kotel

A Jordanian minister on Saturday expressed the Hashemite kingdom’s displeasure with Israel’s announcement that it will allocate an area of the Western Wall plaza for mixed-gender prayer.

Jordanian Media Affairs and Communications Minister Muhammad Momani urged Israel “not to meddle” with the Umayyad Palaces area, using an alternate term for an area south of the Western Wall, adjacent to the Temple Mount.

In a landmark decision last week, Israel’s cabinet voted to push ahead with a plan to expand the Western Wall plaza into that area to allow for pluralistic, mixed-gender and non-Orthodox services at the site, the holiest place where Jews may pray.

Momani called on Israel to return jurisdiction of the area to the Jordanian Waqf, which administers the Temple Mount, known as the Al-Aqsa compound to Muslims, under an arrangement in place since 1967.

Palestinians have also come out in opposition to the plan to expand the plaza. Disputes over control of the flashpoint holy site and charges of violations have often devolved into periods of increased Israeli-Palestinian tensions and spiraling violence.

For the Jordanians to demand the return of the area to the Waqf is breath-taking in its gall and its complete disingenuousness in ignoring the destruction of the Temple Mount that is taking place not only under the Waqf’s nose, but under their direct instructions.

Moreover, as Elder of Ziyon notes:

Minister of State for Media Affairs and Communications, Muhammad Momani, on Saturday, voiced the government’s condemnation of Israel’s violations against the Umayyad Palaces area to the south and southeast of the Al-Aqsa Mosque.

If it wasn’t for those terrible Israeli archaeologists, Jordan would never have known that there were any Umayyad palaces in the area of the Temple Mount to begin with! They were discovered in the 1970s.

Israel has done more to preserve Muslim heritage sites in Jerusalem than Jordan ever did! And the plans for the prayer area will continue to do so.

The second irony: while the Umayyad palaces are impressive, they were partially built with plundered stones from the Temple Mount and Byzantine churches. Here is a lintel from a 5th century church that is on the lower course of stones in the southern Umayyad building: 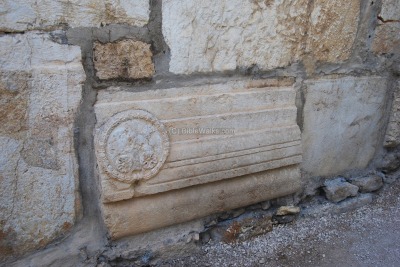 The Jordanians are insisting that palaces that were built by desecrating Jewish and Christian holy places be considered sacred by the Israeli authorities – when the Israelis have been the ones who have preserved them and made them accessible to the public to begin with.

These same Jordanians, who claim that the entire area should be under their control, were complicit in the catastrophic destruction of priceless archaeological finds when the Waqf excavated thousands of cubic meters of dirt containing numerous priceless items to build a huge underground mosque on the Temple Mount.

So to sum up this post, according to the Arabs, Israel has no right to interfere in Muslim prayer rites, or even in Jewish prayer rights.

On the other hand Muslims feel they are fully entitled to interfere and disrupt Jewish prayer rights in Jewish holy places, and they are even entitled to destroy Jewish holy sites, whether a simple makeshift synagogue or their holiest sites: Joseph’s Tomb, the Cave of Machpela, the Kotel or the Temple Mount.