Apologies for the lateness of this post. I almost didn’t write it: a combination of the terrible news from yesterday, my friend Jane z”l’s 2nd yahrzeit, all combined with a rotten cold was almost enough to make me back out. Almost.

But we must not mourn on Shabbat, so here is a very quick Good News Friday post to try and cheer us up before and after Shabbat:

This heartwarming video about service in the IDF for challenged people speaks for itself;

Kol hakavod to all the officers and teachers involved, and of course a huge kol hakavod and salute to those brave soldiers who overcame all the odds with the support of their families and communities, and with huge determination to serve their country. No other country would do half as much. We can be proud of our country and our army.

An extremely heart-warming story on an individual level is the following (English version to follow):

The English version – stranger on a train pays a soldier’s debts:

Daniel Danino, a 19-year-old solder from Beersheva, recounted what she saw while traveling home from her base by train — another female soldier boarding, while weeping into her cellphone as she tried to talk the Israel Electric Corporation out of disconnecting her electricity due to an outstanding debt.

Danino, who was eavesdropping on the conversation, noticed a man also watching the distraught soldier try to figure out what to do. Suddenly, the man went over to her and not only offered to cover her NIS 1,950 (about $500) debt — but paid it on the spot.

Ofir Yitzchak paid a soldier’s debt to the Electric company

“Friends, meet the angel, Ofir Yitzhak,” Danino posted on her page, next to a photo she took of him with her cellphone.

The man who doesn’t have Facebook, but does have the greatest soul I’ve ever come across! Today, during my usual routine, I get on the train that leaves Lod at 16:27 on the way home from the base, and I take a seat by the window, put on earphones and relax from the day. Suddenly, I hear a young soldier girl like myself, subsisting on a soldier’s salary – a soldier who is the only child of a single mother — who is begging the electric company not to cut off the electricity until her mother receives her financial aid check from national insurance… But they are impervious and disconnect her electricity anyway.

I get off the train with hope and faith in people. There are still those who do things for others without expecting anything in return. I was left with my mouth hanging open, speechless, and full of a sense of pride in being a part of this nation that galvanizes to help others during times of distress. Friends, share this post, so that it reaches people who know this amazing guy so they can be filled with pride as well.

In an interview with nrg following the posting of her moving anecdote, Danino said that it didn’t take 10 minutes for the guy to get up, take the girl’s phone and promptly pay her electricity bill with his credit card.

Words cannot describe the greatness and enormous kindness of Ofir Yitzhak – truly a tzaddik. He could teach our greedy Electric company a lesson or two, and we can all lessons of kindness from him.

And a final item to kick the BDS bigots in the teeth: From Israel with love: 10 Israeli innovations for a better life:

These include Rewalk, the exo-skeleton to help paraplegics walk again:

Rewalk, a system which has leg attachments powered by a battery and controlled by a wrist-mounted remote, also has tremendous influence on the mental health of users, as they regain independence and self-esteem. 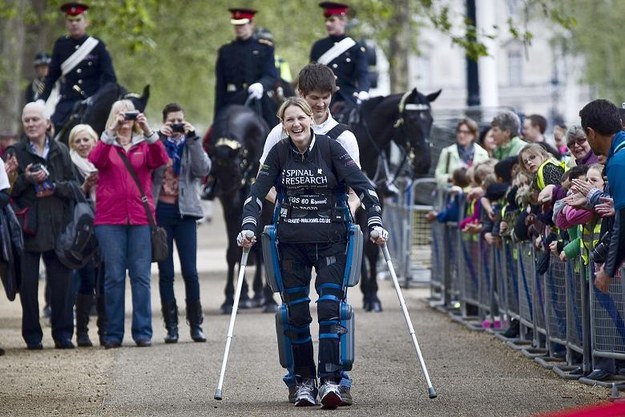 Caring for wounds just got a lot smarter and safer with the emergency bandages or the „Israeli bandages”, as they were nicknamed by American soldiers in conflict areas. Due to the pressure bar, which keeps the wound compressed, the Israeli bandages are incredibly effective in stopping a hemorrhage. They are non-sticky so as not to reopen the wound when removed and they are elastic, so they can be wrapped in ways that fit the type of wound. Plus, they can be used with just one hand. 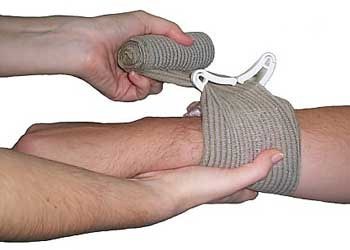 Or how about the B-shoe to prevent unstable people from falling,

Even otherwise healthy seniors sometimes experience sudden losses of balance, that result in falls – and it’s all downhill from there. Looking to nip the evil in the bud, researchers at B-Shoe technologies have developed a walking shoe that can detect when the wearer is about to fall and automatically moves one leg backward for stability. 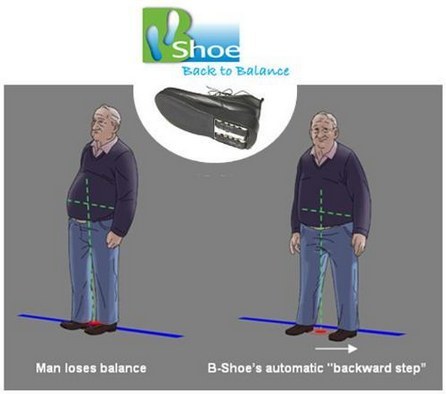 The B-shoe to prevent falling

or the Nano-Retina to give back sight to those with impaired vision with a bionic retina;

…the bionic retina. A tiny microchip is inserted in the actual retina, and connected to neurons there. By wearing a special pair of glasses, light is transformed into electric impulses that stimulate the neurons to send images to the brain. The procedure takes about half an hour and the recovery process is over in less than a week.

the Carti-Heal to repair knees

Israeli researchers are now looking into implants that can regrow cartilage in the knee. Because the cartilage doesn’t have any blood vessels, it is nearly impossible for it to heal itself.
The new regenerative solution from CartiHeal acts as a scaffold for natural tissue to grow on and it involves just a simple arthroscopic intervention.

or Real Imaging for the early detection of breast cancer:

This new device for detecting breast cancer gives hope to millions of women around the world. The machine requires no contact, it’s radiation-free and more precise than other types of screening. It is especially accurate for young women with denser breast tissue. The system analyzes the infra-red signals coming from the malignant and benign tissue and then generates a conclusive report that doesn’t need to be interpreted by a physician.

Have a look at the article to learn more about all these inventions and more.

We can be so proud of our little country!

With that, I wish you all Shabbat Shalom. May the coming week be one of peace and safety for all of Am Yisrael.