There is altogether too much bad news going on and it’s very easy to sink into a sea of gloom and despair. But never fear, Anne is here! I shall try to ease the burden of bad news with some spots of bright light, particularly during this season of ill-will, AKA  “Israel Apartheid Week” – which should be renamed “Hate Israel Month”, or even “Hate Israel all the time”. 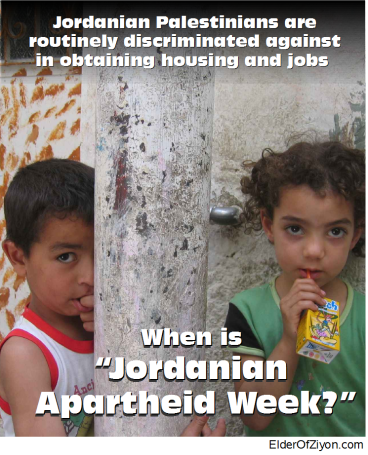 Via Elder of Ziyon’s “Apartheid?” Posters

In a similar vein to the antisemitism at work in Oxford University, the blogger Richard Millett wrote about yet another of his dreadful experiences at London University’s School of Oriental and African Studies (SOAS), this time under the auspices of  the aforesaid”Israel Apartheid Week”.  I don’t know where he gets the courage and fortitude to sit through tirades of accusations against Israel of rape and organ harvesting – and when he tried to argue against these dreadful blood libels the police were called to escort him out!

Sahar Francis of Addameer, a prisoner support group, said that Palestinian hunger striker Islam Hamed was threatened with rape by his guards and that Israel’s prison authorities hoped he would die so the courts would implement a “forced feeding bill”.

She continued that Israel has been rumoured to harvest organs from its own car accident victims and from dead Palestinians. However, she said, she couldn’t confirm this (search Israel Advocacy Movement on Facebook to see the video of Francis).

[Stephen Salaita]  mused on the symbolism of Palestinians throwing stones. He said there’s a miniscule chance of harm from stones (although tell that to the family of Asher Palmer who was killed along with his one year old son when a Palestinian thrown rock smashed through their car windscreen).

The evening became more farcical when six police officers appeared led by a middle-aged woman pointing them towards me saying I have orders against me and am banned from the area for disrupting a funeral!

The police were very, very nice towards me though. They had no idea why they were called or who called them.

Kol hakavod to Richard on bringing this disgusting behaviour to the public eye,  though every time I read these posts of his I fear for his physical safety.

As if the academic antisemitism were not enough, British Jews – in fact all right-thinking Brits – were confronted with revolting anti-Israel posters plastered on the walls of the London Underground in the framework of “Israel Apartheid Week”:

Millions of Monday morning passengers on the London Underground were greeted with a number of ads taken out by the Boycott, Divestment, and Sanctions (BDS) Movement accusing Israel of torturing and massacring Palestinians and slamming UK companies with links to the Jewish state.

Anti-Israel posters on the London Underground

According to a report in the Jewish Chronicle, the campaign includes four ads purportedly put up in 500 trains.

So where are the bright spots of light I promised you?

First of all the British rushed to remove the posters from the Underground:

Around 500 anti-Israel posters are being removed from London Underground trains after sparking outrage that echoed all the way from the British capital to Jerusalem.

The posters were put up by pro-Palestinian activists as part of the annual “Israel Apartheid Week,” which began in the United Kingdom on Sunday.

A spokeswoman for Transport for London, the authority responsible for the underground “Tube” network, said the ads had been posted without authorization and constituted “an act of vandalism which we take extremely seriously.”

Some of the posters claimed that British-made weapons were used by Israel to “massacre” Palestinians during Operation Protective Edge during the summer of 2014. Other posters criticized the British security company G4S for operating in Israeli prisons.

Of course the Israeli politicians couldn’t manage without some in-fighting and bickering over who takes credit:

Information about the posters reached the Israeli Embassy in London on Sunday, at which point embassy officials began working to have them removed. Foreign Ministry Director General Dore Gold, who happened to be in London, also took part in this effort.

“Since the government of Israel, as usual, did nothing, I talked to Johnson, a great friend of Israel, and explained to him that the State of Israel will not tolerate such things,” Lapid said.

Netanyahu later rejected Lapid’s claim of inactivity. “I spoke earlier with the Foreign Ministry director general and I asked him to demand that the British government have the posters removed,” Netanyahu said. “Whoever says we are not taking action is not telling the truth.”

In truth it matters not a whit who can take credit for this as long as SOMEONE in the Israeli government starts taking the threat of BDS seriously and begins to address this problem. It looks like this might be starting to happen finally – years too late but better late than never:

Meanwhile, the Strategic Affairs Ministry held a two-day conference in Jerusalem on Sunday and Monday on anti-boycott efforts. There were 150 participants from 20 countries. “BDS activists are organized in a global network acting to isolate Israel,” Strategic Affairs Minister Gilad Erdan said. “Therefore, our goal is to set up a counter network of NGOs that support Israel. [This network] will deal with the lies [of the BDS movement].”

Erdan said that the Strategic Affairs Ministry will fund the hiring of ten people to work at important Israeli embassies around the world to fight the BDS movement.

Boker tov (Good morning!) as Israelis would say. Where have you been until now? Have you never heard of all of the dozens if not hundreds of pro-Israel NGOs and voluntary organizations that have been active in this field for years?! They have been begging for funds and support from the Israeli government and all they were met with was silence. The behaviour of successive Israeli governments – right-wing at that – is beyond pathetic!

Maybe the problem lies with the confrontational nature of Israeli politics:

Next week, Lapid and Yisrael Beytenu leader Avigdor Lieberman will hold an anti-BDS conference of their own. This marks the first case of political cooperation between the two and many in the Israeli political arena are now wondering if this means they will cooperate further in the future.

It looks like peace might break out between Israel and the Palestinians long before there is any peace between Yair Lapid and Avigdor Liberman!

In even more encouraging news, a Muslim British MP, Sajid Javid (about whom I have written here and here) was quoted in a Facebook post thus (via Zvi):

Sajid Javid, the British economy minister is a Muslim. He is a big supporter of Israel and took part in the annual conference of the Friends of Israel. There he made a speech which praised Israel’s war against terrorism and said that when Israel is fighting the terror is actually beneficial to the world

On that occasion, the British Minister of Education addressed her remarks about the incitement against Israel and said: “Many of those who were behind the last stabbing attack in Israel are young Palestinian who do not even yet reached the age of 18. We see examples of incitement to murder even in the Palestinians textbooks and social Palestinians networks, which calling for stabbing attacks against Jews.

The Britain’s justice minister added that some of the money of the European taxpayers will fund bad education and incitement against Israel. All the conference members agreed that laws must be enacted to stop it

The Facebook page on which this was posted is a bright light of its own. It is called ערבים וימניים מצייצים – Arabs and Right-wingers Tweet and was set up by a religious Jewish girl and an Arab guy, and is run by Jews and Arabs who want to create dialogue through the love of their country and their fellow man. What could be better than that?

Let the Israeli government learn from these grass-roots initiatives and get their act off the ground already!