One killed, several injured as another wave of terror sweeps Israel – and the headlines fail again

After a period of relative calm, in which there were “only” minor stabbing, shooting or car-ramming attempts , which “only” injured Israelis, today (Tuesday) saw a serious escalation in 3 separate terror attacks.

It started in my hometown of Petach Tikva, when an Arab attacked a Jewish man near the shuk, stabbing him in the neck. In a cool-headed (or maybe hot-headed?) heroic manner, the Israeli managed to pull the knife from his neck and stabbed the terrorist back with his own knife, killing him in the process:

According to eye witnesses, the Arab terrorist attacked the Jewish man, stabbing him repeatedly. But his victim fought back, wrestled the knife from the attacker’s hand, and stabbed him to death with his own weapon.

Scene of the Petach Tikva attack 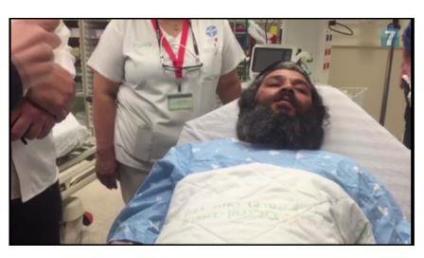 A senior paramedic with the Magen David Adom (MDA) ambulance service described seeing “a haredi man, aged around 40, fully conscious and suffering from multiple stab wounds to his upper body.”

Very shortly afterwards there was a serious attack in Jerusalem, when a terrorist on a motorbike opened fire on a police car, badly injuring two policemen:

According to a Jerusalem Police spokesman, a terrorist gunman riding a motorbike opened fire on a patrol, wounding one officer, and then immediately fled the scene.

Other officers gave chase, and in an exchange of fire another officer was shot and seriously injured, before his comrades succeeded in shooting the terrorist dead.

Police recovered a Carl-Gustav style sub-machine gun from the terrorist’s body, a cheaply-manufactured weapon which has been regularly used by Palestinian Arab terrorists in shooting attacks.

These were not the only attacks in Jerusalem today:

In Jerusalem’s Old City, officers shot and injured an Arab woman who attempted to stab them, while in Qalandiya a second Arab woman admitted to planning a stabbing attack after police discovered her hiding a knife.

But the worst incident occurred in Jaffa, when a knife wielding terrorist managed to stab 10 people, killing an American tourist, before he was neutralized:

An American tourist has been killed and 10 other people wounded in a stabbing spree by an Arab terrorist in Jaffa.

A number of the victims were severely injured in the attack, including four tourists hospitalized in serious condition. At least one of the wounded tourists is a Russian citizen.

Scene of the deadly stabbing spree in Jaffa

The attacker – identified as a 22-year-old resident of the Palestinian Authority city of Qalqilya in Samaria – struck at three separate locations near the marina, before shot dead by police.

According to police, the terrorist first stabbed a 5 people in two separate attacks at the marina itself, before running to a nearby restaurant and stabbing several others inside.

One theory (at least my own theory) for the dramatic upswing in attacks davka today is the visit to Israel by Vice President Joe Biden. It has been clear for a long time, decades in fact, that every time a Western dignitary visits Israel there is an uptick in terror. The Palestinians seem determined to make the West understand that they do NOT want a state of their own, contrary to all the Western (mis)understanding of the region.  After all, if they wanted a state of their own they had plenty of opportunities, first during the years between 1948 and 1967, and after that at each of the Israeli offers of statehood throughout the 1990s and 2000s.

And if the Palestinians really do want a state, then they don’t want it given to them on a platter.  They want to be able to claim that they fought for it and won it in a war.  This is why they have rejected every peace offer made by Israel until now. And this is why, whenever Western leaders visit Israel to pressure us to give up land, it is precisely NOT what the Palestinians want. It is in fact the exact opposite of their wishes.

And thus we find that every time we are the “beneficiaries” of such prestigious visits, Israelis end up sacrificing their lives.

It is gratifying to note that Biden strongly condemned the attacks, pledging total support for Israeli security, upon his arrival, but that is cold comfort for the bereaved families and those who are injured.

Vice President Joe Biden on Tuesday night pledged “total, unvarnished commitment” to the security of Israel, having arrived in the country in the midst of a spate of terror attacks.

Biden landed at Ben-Gurion Airport in late afternoon, as Israel reeled from three attacks — in Jerusalem, in Petah Tikva, and in Jaffa, not far from where he held his visit’s first meeting, with former president Shimon Peres. The sirens of ambulances rushing to the scene of the Jaffa attack were clearly audible as Peres hosted Biden, Israel’s Channel 2 reported.

Speaking after their talks, Peres said Israel was battling terror attacks, and was also battling for peace, and specifically a two-state solution.

Responded Biden: “We have absolutely, total unvarnished commitment to the security of Israel.” He also said he hoped “we can make some progress” during his meetings in Israel and in the West Bank on Wednesday.

No such support, or even lip-service, comes Israel’s way with the disgracefully biased headlines of many international media outlets. Honest Reporting provides us with the miserable roundup (and apologies for copy-pasting almost the entire article. It’s too outrageous to let it go):

Here is the latest headline from the International Business Times:

And New Zealand TV’s One News:

NBC News seems to be confused. “Israeli Stabbing Violence?” Exactly who is doing the stabbing?

The BBC also had difficulty identifying the attackers. As is the BBC’s all too regular style, Palestinians cannot be held responsible:

The bias is outrageous in its arrogance, breathtaking in its dishonesty, and in the final accounting, screams “antisemitism” to anyone with eyes in their head.

And astonishingly, the second example I bring you comes from the Guardian!

So my challenge to the other websites mentioned by Honest Reporting is – if the Telegraph and even the Guardian can manage, why can’t you write a neutral, factual headline which reflects the real timeline and describes the cause and effect and victim and attacker in an honest fashion?

3 Responses to One killed, several injured as another wave of terror sweeps Israel – and the headlines fail again