On Shabbat a suicide bombing, committed probably by an ISIS terrorist, killed 3 Israelis as well as an Iranian national, and severely injured several others. IDF, ZAKA, Magen David Adom personnel flew out immediately to identify the dead,  treat the injured and bring them home.

The Times of Israel has the sad story:

The bodies of three Israelis killed in a suicide bombing in Istanbul on Saturday were loaded on to an IDF airplane that was set to take off Sunday afternoon for Israel, along with several wounded in the attack.

The victims were identified as Yonathan Suher, 40, Simha Dimri, 60, and Avraham Goldman, 69. Suher and Goldman were also named as United States citizens by the State Department.

Eleven more Israelis were hurt in the bombing on Istiklal Caddesi, a bustling two-kilometer-long pedestrian street usually thronged with shoppers, tourists and buskers. Turkish medical officials said that among the Israeli wounded, two were in critical condition, two were in moderate condition and six were lightly injured. The condition of one more injured Israeli was not immediately clear.

Five wounded were to be transported to Israel on the IDF plane on Sunday, including one woman who was in critical condition.

The families of Dimri, Suher, and Goldman were reportedly flown to Istanbul late Saturday, where officials took them to identify the bodies of their loved ones.

Dimri, a retired kindergarten teacher and grandmother from the southern city of Dimona, was survived by her husband, Avi, who was moderately wounded in the attack, as well as three sons, a daughter and several grandchildren.

Dimri’s sons Nadav and Ben flew to Istanbul late Saturday, joining a Magen David Adom delegation so they could be at their father’s side.

Dimona Mayor Benny Biton said Saturday the Dimris were a well-known family with a long history in the city.

“The city feels the pain and shares the grief of the Dimri family,” Biton said in a statement, saying the Dimris were “well-known as contributors to the needy and to city institutions, including anonymously.”

Suher, a resident of Tel Aviv, was in Istanbul to celebrate his 40th birthday. His wife, Inbal, was one of the two Israelis critically wounded in the attack. He was survived by two children.

Goldman, from Ramat Hasharon, was a Jerusalem tour guide, specializing in VIP trips to the city. He was survived by his wife, Nitza, his three children, and eight grandchildren.

What a terrible loss to their families, their communities and to Israel. May their families be comforted amongst the mourners of Zion and Jerusalem.

Considering the hostile relations between Israel and Turkey it was heartening to hear words of condolence from Turkey’s Foreign Minister Ahmet Davutoglu:

“I want to express my condolences to the families of Israeli citizens who lost their lives in the despicable attack and to the people of Israel, and I wish the injured a speedy recovery,” Davutoglu said. “The attack shows us again that the international community must fight aggressively against the lowly goals of terrorist organizations.”

Dogan news agency named the bomber as Mehmet Öztürk and said DNA samples had been taken from his relatives to obtain a match with him.

Turkish Interior Minister Efkan Ala confirmed that Öztürk was the bomber, telling reporters that five other suspects had been detained in the investigation.

Öztürk’s father and brother were detained in the wake of the attack, the news site Hurriyet reported. The father had recognized Öztürk, one of two men initially suspected in the attack — the other was named as Savaş Yıldız — in CCTV footage from the scene and informed the authorities.

Öztürk, who was reportedly on a list of Turkish nationals suspected of membership in the Islamic State, had recently returned to Turkey after a stint with IS in Syria. He was born in 1992 in Gaziantep province, which borders the country.

Shabbat’s attack was of course not the first time that Turkey has been the target of ISIS and other assorted terrorists in recent months, as the article continues:

Turkey has suffered six bombings since July that have killed more than 200 people around the country.

The only attack in Istanbul during that time, outside the Blue Mosque in January, had targeted a tourist quarter. That suicide bombing, which claimed the lives of 12 German tourists, was blamed on IS.

The jihadist group was also held responsible for Turkey’s worst ever attack, which killed 103 people in October at a rally in support of Kurds — arch-enemies of IS across the border in Syria. 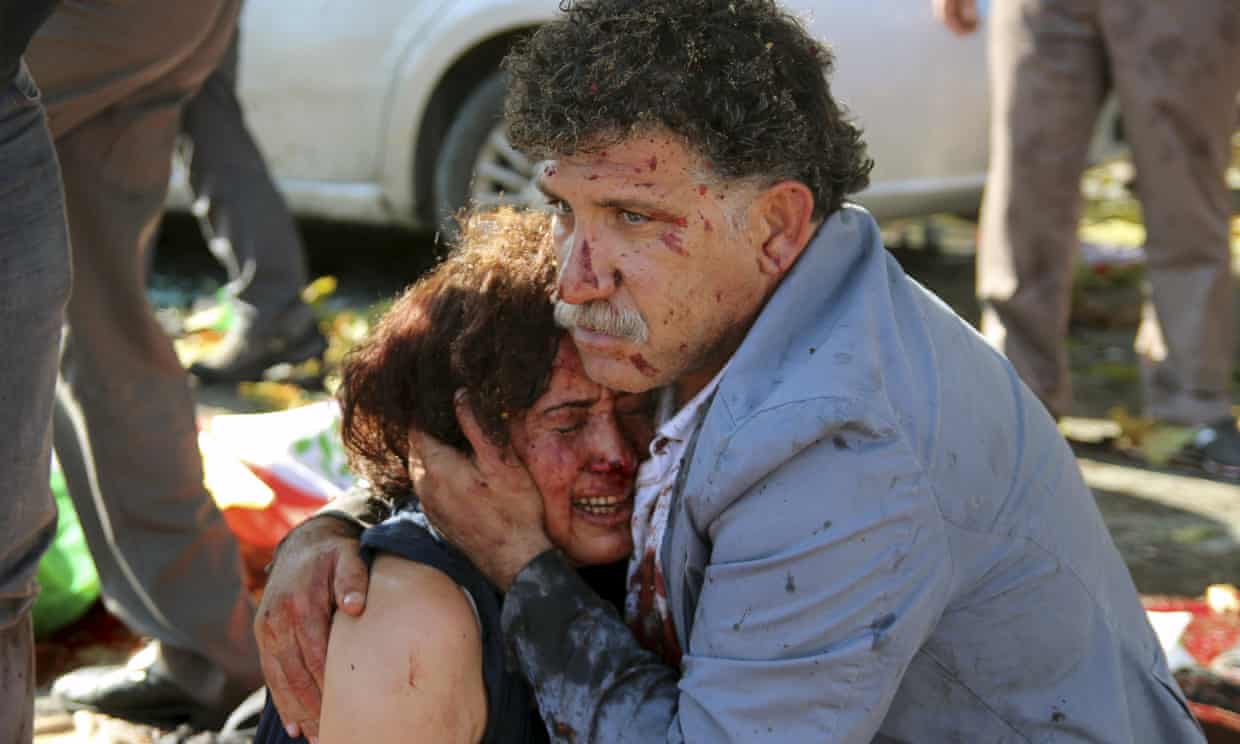 Prime Minister Ahmet Davutoglu vowed to track down those responsible, while NATO allies the US and Europe said they stood by Turkey.

After Saturday’s attack, the Prime Minister’s Office issued a travel warning to Israelis against travelling to Turkey:

The Prime Minister’s Office’s Counter-Terror Bureau raised the alert level on travel to Turkey on Sunday, emphasizing that the country was considered unsafe for Israeli citizens a day after a suicide bombing in Istanbul left 3 Israelis dead and 11 wounded.

In a statement, the PMO said that the bureau had decided to “upgrade its existing travel warning and recommends that the public avoid visiting Turkey.”

In explaining the decision, the statement said that amid a spate of attacks by the Islamic State groups and Kurdish separatists, and notably the bombing Saturday, “it was decided to update the existing travel warning vis-à-vis Turkey from an ongoing potential threat to a basic concrete threat.”

At the same time, Prime Minister Benjamin Netanyahu said Israel was in the front line of a global war on terror, adding that those who failed to condemn terrorist attacks were in effect supporting them. Commenting on Saturday’s suicide bombing, the prime minister said there could be no justification for terrorism.

“Israel is at the forefront of the fight against international terrorism. This fight is primarily military, but no less than that, it is moral,” Netanyahu said at the opening of the weekly cabinet meeting in his Jerusalem office. “The key point of the moral struggle against terrorism is clear — terrorism, the murder of innocent people, has no justification anywhere – not in Istanbul, not in the Ivory Coast and not in Jerusalem. Those who do not condemn terrorism support terrorism.”

The PMO was also correct in issuing the travel warning, given Turkey’s rising antisemitism and its mixed messages on normalization with Israel, as Uzay Bulut in the Gatestone Institute explains:

Davutoglu, foreign minister at the time of the Mavi Marmara incident, added that Turkey would continue to isolate Israel in international platforms.

Since Davutoglu became prime minister in August, 2014, his stance against Israel has not changed.

Turkey — after damaging or even destroying its relations with almost all of its neighbors – is now at the door of Israel, which the Turkish government has condemned several times by referring to it as “more barbaric than Hitler” and even expressed its wish of establishing “a Muslim Jerusalem.”

Due to such negative statements regarding Israel, the Turkish public has largely been brainwashed and filled with intense prejudice against Israel. Ridding them of it will be extremely difficult.

Turkish leaders would do well to stop seeing Israel solely as a “source of weapons and trade” with whose strength and cooperation they can do anything they want while they continue to bully their neighbors and minorities.

Turkish leaders might also do well publicly to recognize the sovereignty of the state of Israel. Actually, it may even be too late for the Turkish government to make positive statements about Israel. Turkish politicians have relied so much on their anti-Israel rhetoric to get public support that many of their voters would most probably go into a rage if they heard their political representatives say something nice about Israel.

It’s not only anti-Israel hostility, but outright antisemitism (yes, I know there is barely a difference between the two) that rules in Turkey, as Burak Bekdil writes at Gatestone:

Meanwhile in Belgium, a French terrorist who was part of the team that carried out the huge terror attacks in Paris last year, was captured by police as he admitted that he was planning another terror attack:

Belgium’s foreign minister said Sunday that terror suspect Salah Abdeslam has told investigators he was planning to “restart something” from Brussels.

Foreign Minister Didier Reynders said Abdeslam said “he was ready to restart something from Brussels, and it’s maybe the reality.”

Abdeslam, captured Friday in a police raid in Brussels, was charged Saturday with “terrorist murder” by Belgian authorities. He is a top suspect in the November 13 attacks in Paris that left 130 people dead.

The Belgian-born French citizen, who was caught unarmed after being shot in the leg, told interrogators he had planned to blow himself up at the Stade de France stadium in Paris but had backed out at the last minute.

Paris prosecutor Francois Molins on Saturday told reporters Abdeslam had played a “central role” in planning the November attacks, which targeted bars, restaurants and the Bataclan concert hall and were claimed by the Islamic State group (IS).

His brother Brahim blew himself up in a restaurant in the east of the French capital, and Molins said Abdeslam had planned to do the same at the Stade de France before changing his mind.

Abdeslam’s arrest in the gritty Molenbeek neighborhood of Brussels was hailed by European and US leaders, while French Interior Minister Bernard Cazeneuve said it dealt a “major blow” to IS jihadists operating in Europe.

But the minister warned Saturday that the threat level remained “extremely high” and said France was deploying extra police officers to its borders to step up controls following discussions with Interpol.

Police have also detained a suspected accomplice, known only under the false IDs of Amine Choukri or Mounir Ahmed Alaaj, but at a prison near Liege in eastern Belgium.

The Israeli government and its spokesmen must continue to stress at every opportunity that terrorism is terrorism no matter where it occurs, and the nations should keep in mind that what starts with the Jews does not end with the Jews.

2 Responses to 3 Israelis killed in terror attack in Turkey, several injured, amid rising antisemitism in Turkey