The seventh day of Pesach, “Shvi’i shel Pesach”, begins tonight, running straight on into Shabbat tomorrow night, giving us an “8-day Pesach” along with our fellow Jews in the Diaspora (who celebrate an extra day of the festival).

Shvi’i shel Pesach is the day the Children of Israel finally crossed the Red Sea into the Sinai Desert after fleeing Egypt, witnessing the miraculous Splitting of the Sea.

Here is a very interesting, thought-provoking insight by Britain’s Chief Rabbi Efraim Mirvis into the events at the Splitting of the Sea, and when it is time to act, not to pray:

The Emeritus Chief Rabbi of the Great Synagogue of Sydney, Australia, Rabbi Dr. Raymond Apple also has some very interesting ideas to share with us about Pesach, and the 7th day in particular:

The 7th day of Pesach is marked by the Song of the Red Sea, the “shirat ha-yam”. This is Pesach at its most poetic and dramatic. A people recalls its liberation and sings to God.

Few poets could put into words the soaring emotions of the moment. Few could match what Hertz has called “probably the oldest song of national triumph still extant”.

This is not the only song which Israel sang in the course of Biblical history (Mechilta, Shirata). They sang in Egypt on the night they departed. They sang when a well of water sprang up in the wilderness. Moses sang a song of joy and comfort before he died.

Joshua sang when he won a great victory. Deborah and Barak sang when they vanquished Sisera. David sang when he was delivered from his enemies. Solomon sang when the Temple was dedicated. King Yehoshaphat sang as he went into battle.

There were many songs, but only one Shirah.

On the night of the 7th day the Egyptians drowned in the sea and the following morning the Israelites sang the Song of Praise,

“and this was the 7th day of Pesach; that is why we read the Song on the 7th day”.

The Shirah is also found in the daily Shacharit service. The Zohar says,

“Whoever reads the Shirah daily with devotion will have the merit to read it in ‘Olam HaBa’ (the World to Come)”.

Machzor Vitry regards the daily reading as “a good custom”.

This indicates that there is more than historical association behind the importance of the song. Indeed the sages saw the splitting of the Red Sea as evidence for God: at the Red Sea a handmaid is said to have felt more spirituality than even the prophets did.

The Tanya (Sha’ar HaYichud, ch. 2) comments on how apparently illogical it was for the waters of the sea to stand upright. This occurred only because of God’s decree.

If this was a miracle,

“how much more so is it in the creation of being out of nothing which transcends nature and is far more miraculous than the splitting of the Red Sea, that with the withdrawal of the power of the Creator from the thing created, God forbid, it would revert to naught and complete non-existence. Rather, the Activating Force of the Creator must *continuously* be in the thing created to give it life and existence.”

Some more Pesach food for thought (to replace the almost inedible Matza) appears in a beautiful article by Rabbi David Wolpe in Time Magazine (of all places!): “Judaism is a 3000 year old love affair with a Land:

On Passover, Jews all over the world change one sentence in their daily prayers; instead of praying for rain, we begin to pray for dew. For in Israel the time for the grain harvest has begun, and if the winds blow and the rains fall, the grain cannot be harvested and will will rot in the field. Dew on the other hand, will moisten the grain without damaging it. That simple change in the prayer marks a profound truth about Judaism that touches on modern politics as well.

Twenty-five years ago I was returning from a two-day trip to New York. I ran into my teacher, the late Rabbi Henry Fisher. We began talking, and he asked me if I had changed my watch to accommodate New York time. “No,” I said, “I kept it on Los Angeles time.” “Why?” he asked? “Because,” I answered, “I would soon be home.”

Rabbi Fisher then told me that that is why Jews all over the world prayed for rain or dew when it was needed in Israel, no matter where they lived. The assumption of Jewish history is they would soon be back in Jerusalem. They kept their clocks to the time at home.

It has also been a tradition for many centuries in Judaism to leave a corner of one’s house unpainted, to remind us that this is a temporary dwelling. We are here only until we are gathered back to Israel.

Such practices remind us that politics should not obscure a deep truth about Judaism—it is a 3,000-year-old love affair with a land. Nobel Prize winning writer Shai Agnon expressed this idea with his usual wit. Elie Wiesel writes: “Shai Agnon had a marvelous word in Stockholm when he received the Nobel Prize. He said, ‘Majesty, like all Jews I was born in Jerusalem, but then the Romans came and moved my cradle to Buczacz.’” Agnon recalls the destruction of the Temple 2,000 years ago as scattering all Jews from their birthplace, the place to which he returned in his lifetime to become a storyteller for his people and the world.

Read the rest. It really is very inspiring, and so relevant in these days of the attempt by our enemies to destroy and deny the connection of the Jewish People to the Land of Israel.

And lastly, to bring a smile to your faces before Chag, here are a couple of cartoons that tickled my funny bone: 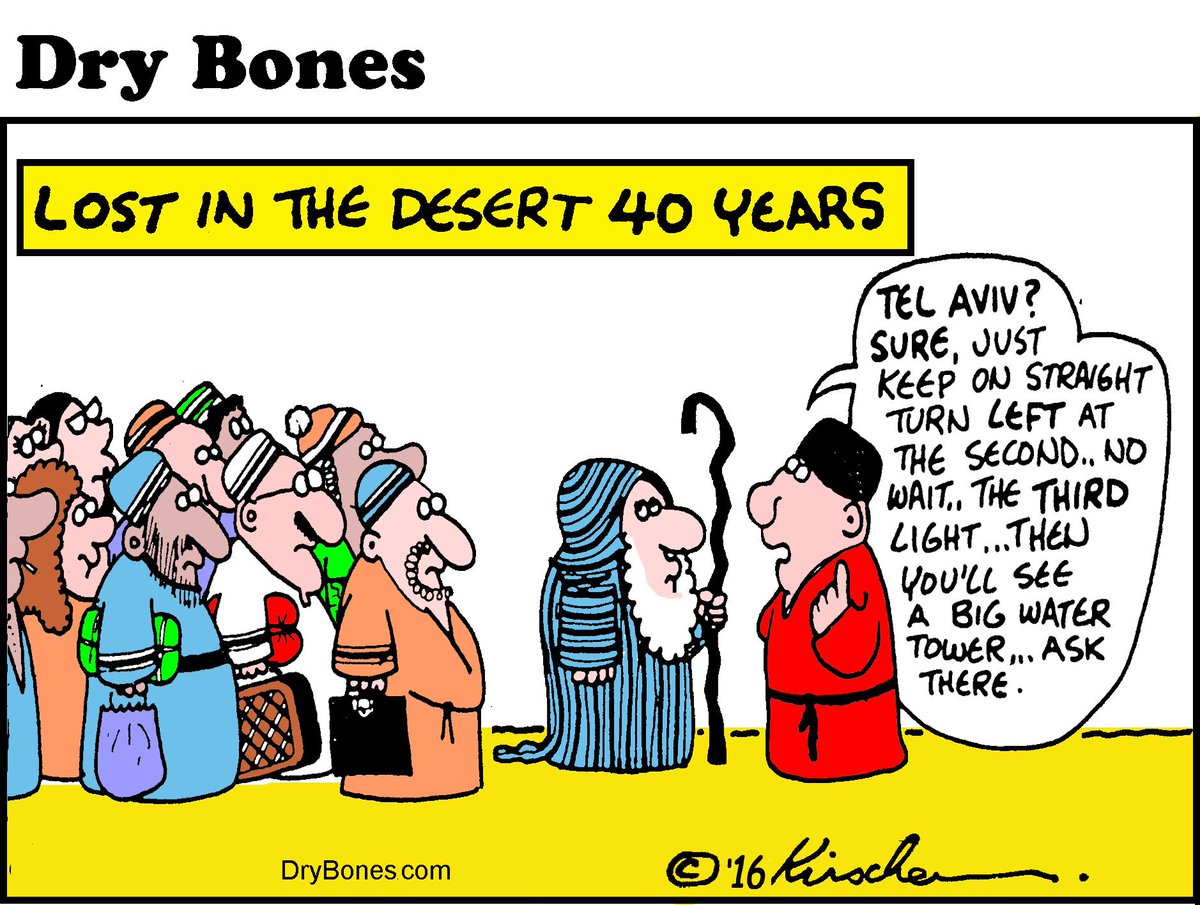 Chag Same’ach everyone and Shabbat Shalom! I won’t be online until Saturday night or Sunday at the very earliest.