Yom Hashoah began at sundown this evening with the annual ceremony at Yad Vashem. This year’s torch-lighters were all survivors who reflected “the struggle to retain the human spirit” under terrible torture and deprivation. You can read the life-story of each torch-lighter at the link. Each one is remarkable.

Mrs. Zahava Roth spoke on behalf of the survivors. A personal note: Mrs. Roth and her family belong to our shul, and she is a neighbour of my parents. Her grandchildren and our children were all together in school. Mrs. Roth told the audience how, at age 7, she became “nobody’s child”, as she was smuggled out of the Bochnia ghetto by her mother and aunt, to be hidden by Christians and then by Jews. You can read her chilling and terrifying story at the link and see a short video clip (Hebrew only).

Her happy ending is that she eventually made it to Israel and rebuilt her life, raising a warm, strong, religious family. Zahava Roth is an inspiration to all of us.

At the ceremony, President Rivlin addressed the shameful way that Holocaust survivors have been treated by the authorities in Israel, with up to 50% of them living below the poverty line, and asked for forgiveness in the name of Israel:

According to data released by the Foundation for the Benefit of Holocaust Survivors, there approximately 189,000 Holocaust survivors in Israel, 45,000 of whom live under the poverty line.

Rivlin said the Holocaust demonstrated the need for the Jewish people to be in charge of its own fate, and that it should never outsource its own security, although adding that the State of Israel “is not, under any circumstances, compensation of the Holocaust.”

Rivlin told the following chilling story about Passover in Bergen Belsen in 1944, which nevertheless holds the secret to the Jewish People’s survival: the willingness and ability to adapt to survive:

The President began by describing the scene in Bergen Belsen Concentration Camp on the first night of Passover, 1944. “In barrack 18, a group of Jewish prisoners gathered, determined not to eat Chametz (leavened bread). Rabbi Aharon Bernard (Yisachar) Davids, the rabbi of Rotterdam and a leader in the religious Zionist movement, who decided not to escape with his family but rather was sent with his community to Bergen Belsen, explained to them that it was their obligation to do what was necessary to stay alive.

“Chametz on Passover Prayer” from Bergen Belsen Passover 1944 was on display at the Ghetto Fighters Museum in Tel-Aviv.

In order to convince them, he picked up a piece of bread, and before eating it on that Seder night, he read a special prayer which he had penned together with Rabbi Simon Dasbergm, and other Rabbis from Holland, which read; ‘Our Father in Heaven! It is known to You that we desire to fulfill Your will and observe the Passover holiday by eating Matzah and safeguarding against Chametz. But our hearts are pained at the captivity which prevents us, and we find ourselves in danger of our lives. We are hereby ready to fulfill Your commandments “And you shall live by them (the commandments)” and not die by them, and to observe the caution of “guard yourself and watch your life greatly.” Therefore our prayer to You is that You keep us alive, and sustain us, and redeem us speedily.” The President added that tragically, Rabbi Davids had perished just months before the liberation of the camp.

“I believe that the memory of the Holocaust for future generations, should meet three basic principles” said the President, and continued, “Firstly, we should always be able to defend ourselves – we should not privatize our security. The State of Israel is not, under any circumstances, compensation of the Holocaust. However, the Holocaust put into perspective the necessity and crucial need of the Jewish people to return to its historical roots, as a nation that takes its fate in its hands.

… The second point is the shared Jewish fate. In Auschwitz and Babi Yar, in the darkness and in great fear, an alliance was forged – the Covenant of the Pieces. […]We will forever pursue the blood of our brothers and sisters, individuals and communities, which screams at us from within the earth. We will continue to pursue the deniers, those who want to forget and those who want to blur history.

… The third point, beloved is man created in God’s image. This is a Jewish truth, the most fundamental human truth and the deepest antibody to the horrors of the Holocaust, where our people and all of us were turned to dust, to ants, to un-human beings. Beloved is man created in God’s image. Whether we want or not, the Holocaust imposes a hard and terrible duty on the Jewish nation and its conduct. The Holocaust will forever place us, the Jewish people, as eternal prosecutors on the stage of humanity, prosecutor against anti-Semitism, racism and ultra-nationalism.

In sadly timely news, we learn that despite the substantial decrease, by 46%, of violent antisemitism worldwide, there was nevertheless a rise in institutional antisemitism.

In addition, Britain saw the opposite effect, with a huge rise in antisemitic crime in 2015 (h/t Brian Goldfarb):

The results speak for themselves. Antisemitic crime is climbing fast, violence against Jews is soaring, and the police response is gradually getting worse. If Britain is to escape the fate of other European countries, where antisemitism and extremism are rife and Jews are leaving in their thousands, we must train our frontline police officers and prosecutors, and properly oversee them.

But to conclude on a slightly less somber note, here is our revenge: our son-in-law in the uniform of the IDF, standing with a Sefer Torah outside Auschwitz on an army March of the Living last year: 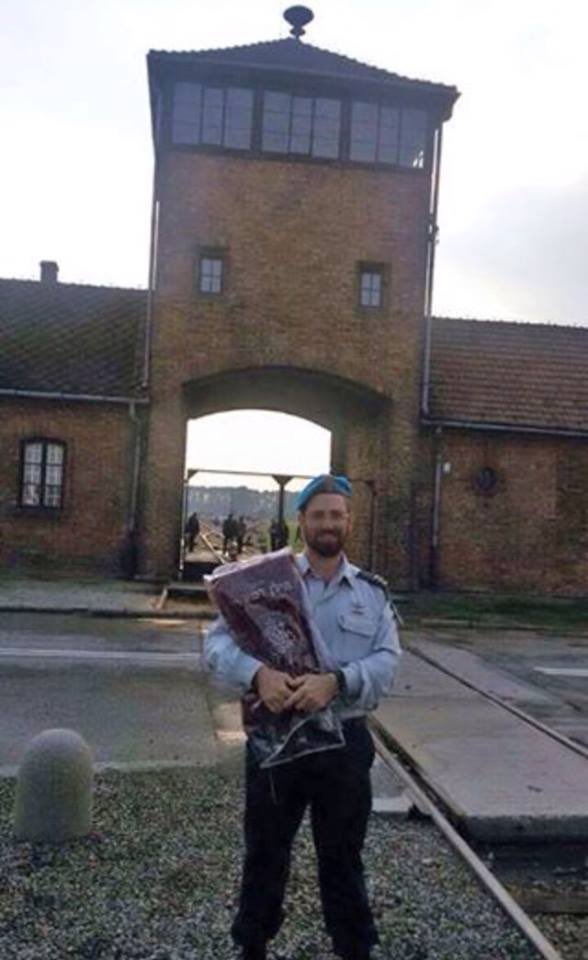