We’ll start with some Jewish tradition. Yesterday was the minor holiday of Lag Ba’Omer, the 33rd day of the Omer. The main celebration, or “Hilula” is marked with a gigantic bonfire, attended by hundreds of thousands of people, at the grave of Rabbi Shimon Bar Yochai (whose yahrzeit is traditionally held to be on Lag Ba’Omer) in Meron, near Safed in the Galilee.

Bonfires are also lit all around the country at private and public gatherings and in Israel at least, people spend time outdoors. The roots of these traditions can be read at the link.

The bonfire tradition is one taken VERY seriously by all Israelis of all ages, and anyone flying over the country on Lag Ba’Omer eve might think the country has caught fire! Sadly there were several outbreaks of fire around the country – whether from negligent celebrants or arson, and the very hot dry heatwave only spurred the fire on – but the massive wild-fire outside Jerusalem was the largest and most dangerous.

Wildfire outside Jerusalem, near Ramot neighbourhood

Nearby residents had to be temporarily evacuated, but thankfully it was finally brought under control without injury or loss of human life, but the damage to the trees and wildlife is still to be measured.

Interestingly the Picture a Day website has some great photos of a Lag ba’Omer children’s procession in Jerusalem from almost 100 years ago! 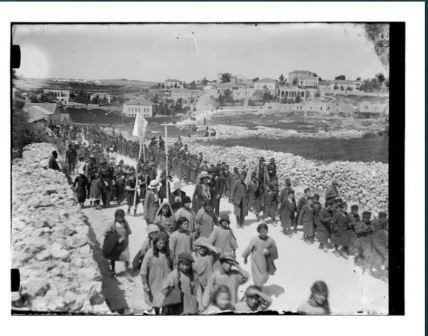 Today, there is a 1918 date on the Library of Congress page and this new caption:  “Jewish children and adults, one holding a Star of David banner, walking south on Nablus Road towards the grave of Shimon Hatzadik (Simon the Just), Jerusalem.”

In fact, the day was Tuesday, April 30, 1918. The procession is almost certainly an organized outing of several Jerusalem schools taking place on Lag Ba’Omer, four weeks after Passover. Traditionally, on Lag Ba’Omer Jews flock to the Galilee mountaintop of Meiron to the grave of Shimon Bar Yochai, one of the most famous scholars in the Talmud. But some 100 years ago, travel to Meiron would have taken days. Instead, the children took a hike to Shimon Hatzadik’s grave, a known custom 100 years ago in Jerusalem.

The houses around the grave where Jews lived 100 years ago were abandoned under threat of Arab pogroms in the 1920s and 1930s. The Hadassah convoy massacre in 1948, in which almost 80 Jews were killed, took place on the road beneath the building with the very prominent arches.

In recent years, however, Jewish families have returned to the Shimon Hatzadik neighborhood.

Read the rest of the story about the photo. It is quite fascinating. The site also provides us with a useful comparative picture showing the area then and now:

Comparison of buildings from 1918 and today. Second stories were added to the buildings over the years. (IDP)

An added bonus to these wonderful photos is the proof that Jews were living, working and thriving in Jerusalem long before the antisemites claim we arrived in Israel, and long before any “Palestinian” Arabs laid claim to the houses that the Jews abandoned precisely because of that Arab violence.

Since we’re in celebratory mood, what better news could there be than to know that Israel has the world’s 6th highest life expectancy rate (via Pini). Not bad for a country in a war zone!

Despite ongoing security threats and regional instability, Israelis can expect to live well into their 80s, according to the World Health Organization’s (WHO) newly released global report on life expectancy.

…  Israelis can expect an average lifespan of 82.5 years—80.6 for men and 84.3 for women, according to WHO. This sharply contrasts with some of Israel’s neighbors, including Egypt (71 years) and Jordan (74 years). For those living in conflict-ridden Syria and Iraq, the average life expectancies are about 65 and 69 years, respectively.

In the United States, males have an average lifespan of 77 years and women an average of 81.6 years.

I take the comparison with the US more seriously than with our war-torn neighbours, and it’s a badge of honour for us to rate higher than them.

This is of a piece with the World Happiness Index where there too, Israel ranked very high, in 11th place.  Again, never mind the 3rd world countries. Let us compare ourselves to the West:

the report, now in its fourth edition, ranks 157 countries by happiness levels using factors such as per capita gross domestic product (GDP) and healthy years of life expectancy.

It also rates “having someone to count on in times of trouble” and freedom from corruption in government and business.

Israel is certainly a country that can be counted on not only in times of trouble, but at all times. Israelis are always working to improve the world and the human condition. Last week French PM Emanuel Valls inaugurated Israel’s largest solar park:

Israel came one step closer to a clean-energy future on Sunday, when the country inaugurated a 50-megawatt solar in the northern Negev, through a partnership with a subsidiary of France’s national electric company.

The Zmorot Solar Park was built as a joint project of the Israeli partner Solex and EDF Energies Nouvelles Israel Ltd., with the support of a subsidiary of the Électricité de France’s renewable energy arm.

French Prime Minister Manuel Valls attended the inauguration during his three-day trip to Israel, calling the site another “chapter of cooperation between our two countries” and a sign of future work. He hailed the Zmorot field as more than just a technical project. “It is a political project, a project that shows us a way for the future of renewable energy.”

Kol hakavod to Solex and EDF on their collaboration and this successful project. May they go on to many more joint projects which keep our air clean!

What else keeps us happy here in Israel? Visiting performers!. And you don’t get much bigger a star than Elton John who rocked Tel Aviv last night to a sold-out audience:

Thank you Sir Elton! Looking forward to many more performances.

And for a lovely close to this week’s post, here is a great feel-good story, which I would call “Only in Israel”, except that it happened in Paris – an unexpected story of unity and hope:

As Israelis took the lids off their foam sprays and silly string, and adorned themselves in blue and white to celebrate Independence Day, we stepped off a plane at Charles de Gaulle Airport in Paris and began making our way towards baggage control for a four-day trip to the French capital.

Just a few hundred meters into the terminal, a woman came running down the ramp shrieking in panicked French. We had no idea what she was saying, but a moment later spotted a middle-aged man collapsed on the floor, with a small crowd of anxious people around him.

He had no pulse, and a man kneeling on the floor next to him began to try to resuscitate him. My husband, Meir Arad, an Israeli Jew, ran up to a member of the airport staff who was standing watching nearby, and asked her to get a defibrillator. She disappeared through a door behind her… and didn’t come back.

My husband joined the man kneeling on the floor, an Israeli-Arab nurse from near Tiberias whose name we never caught. Together they began working on the man, taking it in turns, one after another, hands together pumping on his chest trying to revive him.

As onlookers just walked on without offering help, and airport staff disappearing from view, the Arab nurse remarked:

“This balagan could never have happened in Israel,” we all told each other.

And the happy end?

And they did save his life. An hour or two later we received a text from El Al that the man, whose name we never knew, was revived and doing well. Without their intervention, there is no doubt he would have died on that ramp in Charles de Gaulle. It was a joyful end to a very moving Independence Day.

Kol hakavod to Meir Arad and the (unnamed) Arab nurse. Not only did they save a human life, but they brought honour to Israel, making a huge kiddush Hashem (sanctifying G-d’s name).  Would that there would be more people like these two heroes all over the world.

And with this heart-warming story I wish you all Shabbat Shalom!