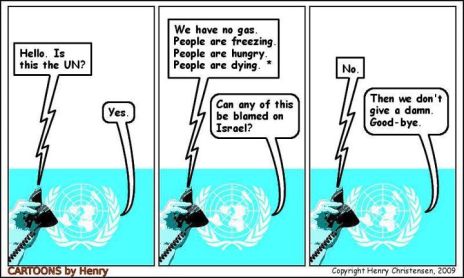 Before I start, I want to point out that I thought the following story sounded very familiar. And in fact, it’s simply an action replay of countless almost identical condemnations of Israel – and Israel alone – by the WHO for “violations of health rights” when in fact, as we all know, Israel is a leading light in health care for all citizens, even enemy citizens.

Now to the news story itself:

In outrageous but otherwise totally unsurprising news, the World Health Organization (WHO) which comes under the auspices of the UN (surprise!) condemned Israel for violating Palestinians’ health rights, which Yesh Atid leader Yair Lapid slammed as antisemitic:

The letter came after the agency singled Israel out for condemnation, passing a resolution at the UN organization’s annual assembly in Geneva Wednesday against its operations in the area of Palestinian hospitals, and claiming Israel violates health rights on the Golan Heights. The resolution passed 104-4 with six abstentions.

As Lapid pointed out, Palestinian terrorists often operate in and around hospitals, such as in 2014’s Operation Protective Edge when Shifa Hospital in Gaza City was used to fire rockets into Israel, targeting civilians. At the same time, Israel set up a field hospital to treat injured Palestinian civilians.

“The blame here lies with those who abuse medical facilities and turn them into military facilities.

It is Hamas and Islamic Jihad who should be the focus of your condemnation,” Lapid wrote.

Israel also often treats those injured in the Syrian civil war, bringing them into Israel through the Golan Heights.

Lapid accused the WHO of politicizing health-rights:

Yesh Atid accused the WHO of allowing itself “to be used by those who seek to alienate the State of Israel through a campaign of delegitimization. This orchestrated campaign against the sole Jewish state in the world is a modern manifestation of anti-Semitism.”

“Your organization veered away from its mandate and waded into the campaign to delegitimize Israel. In between important discussions on the Zika virus, shortages in medical equipment and vaccine action plans, the WHO highlighted Israel… for so called abuses,” Lapid wrote.

Lapid urged the WHO to repeal the resolution against Israel as soon as possible and, instead, “focus on combating real health crises across the world.”

In preparation for WHO’s publication of the decision, the Palestinian Ministry of Health submitted a report to the international organization. Apart from the usual allegations propagated by various NGOs, the official Palestinian submission also includes the following outrageous charges:

• Israel is damaging prisoners’ health by “Holding prisoners in polluted areas, such as in the vicinity of the Dimona reactor …

• “In April 2013 the Russian newspaper Pravda accused Israel of injecting a number of Palestinian prisoners who were approaching their release date with cancer-causing viruses….

Beyond the unfounded, vitriolic allegations, the pictures appearing in the Palestinian Health Ministry’s report highlight the submission’s total lack of credibility. Here are some examples:

Here is just one example:

On page 30, the following picture is meant to illustrate “Settlers attacking a Palestinian child while being observed by Israeli occupation forces”:

However, as noted by blogger Israellycool two years ago when this picture first started to appear on social media, it is a Getty Images picture showing the eviction of Israeli settlers. The scene does not at all involve Palestinians.

Israeli settlers, not Palestinians, being evicted

There are many more such examples, both at CAMERA’s site and all over the internet. Most people don’t bother to look for the source of photos, they just assume it is what the publisher claims it is. When it comes to the Palestinians one cannot take one single word or photo of theirs at face value. Shame on the WHO for being so gullible, and so eager to believe the worst of Israel.

Hillel Neuer of UN Watch previously slammed the WHO for its hypocrisy, with particular ire reserved for the perfidious Europeans:

“By scapegoating the Jewish state for all the world’s health problems, just as medieval Europe once accused the Jews of poisoning the wells, the EU aids and abets the UN and its World Health Organization to betray the cause of humanity and the very principles upon which they were founded,” UN Watch Director- General Hillel Neuer wrote.

Rather than “set[ting] the record straight and [taking] a stand against such base demonization of the Jewish state… Britain, France, Germany and all other EU states joined the jackals by voting for today’s resolution,” he added.

“Yet, the EU was silent. Instead, it justified its vote by claiming in its speech that today’s resolution was ‘technical.’ This is the old Brussels-Ramallah wink-and-nod game: the PLO submits a more inflammatory text at the beginning, knowing it will be revised later to allow the Europeans to pretend they achieved a ‘balanced’ text. Israel is then expected to celebrate that it has been lynched with a lighter rope.”

The truth is, the UN health assembly should single out Israel—as a beacon of humanity.

The UN should single out Israel because if you walk into any Israeli hospital or clinic, you will see it replete with Palestinians receiving world-class medical treatment.

Neuer’s resounding warning is so urgent and yet so likely to go unheeded by those that matter:

Yet so long as the UN instead descends into irrationalism, scapegoating the Jewish state for all the world’s health problems just as medieval Europe accused the Jews of poisoning the wells, the organization betrays the cause of humanity and the noble principles upon which it was founded.

One lonely voice in the wilderness is British MP Sir Eric Pickles who once again has demonstrated his support for the Jews, and for the truth:

If only there were more brave and honest souls like him, maybe then his words would be taken in by those in power.