Another week has rolled by, and it’s time for another Good News Friday installment. This week’s post is going to focus mainly on Israel’s technological prowess.

My first item is about Israel’s well-known advances in desalination. A Scientific American article writes that Israel proves the desalination era is here:

We are standing above the new Sorek desalination plant, the largest reverse-osmosis desal facility in the world, and we are staring at Israel’s salvation. Just a few years ago, in the depths of its worst drought in at least 900 years, Israel was running out of water. Now it has a surplus. That remarkable turnaround was accomplished through national campaigns to conserve and reuse Israel’s meager water resources, but the biggest impact came from a new wave of desalination plants.

[Edo] Bar-Zeev, who recently joined Israel’s Zuckerberg Institute for Water Research after completing his postdoc work at Yale University, is an expert on biofouling, which has always been an Achilles’ heel of desalination and one of the reasons it has been considered a last resort. Desal works by pushing saltwater into membranes containing microscopic pores. The water gets through, while the larger salt molecules are left behind. But microorganisms in seawater quickly colonize the membranes and block the pores, and controlling them requires periodic costly and chemical-intensive cleaning. But Bar-Zeev and colleagues developed a chemical-free system using porous lava stone to capture the microorganisms before they reach the membranes. It’s just one of many breakthroughs in membrane technology that have made desalination much more efficient. Israel now gets 55 percent of its domestic water from desalination, and that has helped to turn one of the world’s driest countries into the unlikeliest of water giants.

The institute’s original mission was to improve life in Israel’s bone-dry Negev Desert, but the lessons look increasingly applicable to the entire Fertile Crescent. “The Middle East is drying up,” says Osnat Gillor, a professor at the Zuckerberg Institute who studies the use of recycled wastewater on crops. “The only country that isn’t suffering acute water stress is Israel.”

Indeed, Israel’s desalination miracle is widely known and well-documented, but it’s still a great morale-boost to read such praise in such prestigious media outlets. Just as “The Torah shall go forth from Zion”, so too it appears that “water shall go forth from Zion”. We should be proud of our scientists and researchers, and even the politicians, who together enabled the solution to our water crisis.

From water conservation to bio-medics, Tel Aviv University researchers have found a way to spot tumor cells invading the brain:

Metastatic melanoma is the deadliest of the skin cancers; when malignant melanoma metastasizes to the brain, it is a death sentence for most patients. The mechanisms that govern early metastatic growth and interactions of metastatic cells with the brain’s microenvironment are still shrouded in mystery.

Now, a Tel Aviv University study shows a new way of detecting brain micrometastases months before they transform into malignant and inoperable growths. According to the research, micro-tumor cells hijack astrogliosis, the brain’s natural response to damage or injury, to support metastatic growth. This knowledge may lead to the detection of brain cancer in its first stages and permit early intervention, the university said in a statement.

The study was led by Dr. Neta Erez of the Department of Pathology at TAU’s Sackler Faculty of Medicine and published in Cancer Research.

Read the rest of the article to learn how this new method works. It is astonishing to learn how these researchers can discern cell behaviour when they are almost invisible. Halevai (if only!) their work should bear success and help thousands of cancer patients. Kol hakavod to Dr. Neta Erez and the rest of the Tel Aviv University research team. May they go from strength to strength.

In a similar field, Israel’s Technion has developed a new nanotech approach for treating stomach cancer:

A potential oral nanomedicine treatment for stomach cancer has been developed at the Technion-Israel Institute of Technology using a combination of anti-cancer drugs and a chemo-resistance reversal agent, which eliminates gastric tumors’ resistance to chemotherapy drugs.

The treatment could be self-administered at home by the patient — eliminating the need for hospitalization, which is dangerous for immunocompromised cancer patients due to drug-resistant pathogens widespread in hospitals.

The new treatment modality is based on a transport platform developed as part of Maya Bar-Zeev’s doctoral dissertation at the Russell Berrie Nanotechnology Institute, under the joint supervision of Prof. Yoav Livney of the Faculty of Biotechnology Engineering, and Prof. Yehuda Assaraf, Dean of the Faculty of Biology and Director of the Fred Wyszkowski Cancer Research Laboratory at the Technion.

Here too, a huge kol hakavod to Maya Bar-Zeev on her pioneering research, together with her supervisors and other researchers. Once again, Israel’s brilliant scientists are at the cutting edge of progress and technology for the betterment of all humankind.

With all this good news is it any wonder that the number of UK tourists to Israel is snowballing?

The number of UK tourists heading to Israel is snowballing. Earlier this year, the Israel Government Tourist Office (IGTO) announced a year-on-year increase of 10% in 2015, to 197,859 – one of the largest market increases across Europe for the destination. 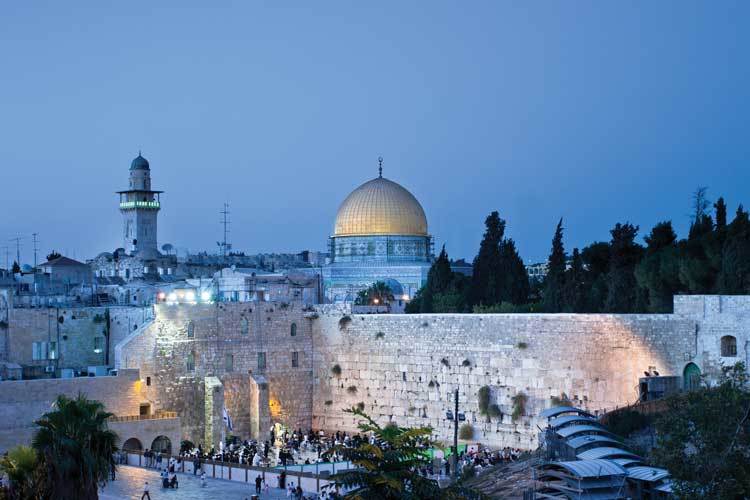 Jerusalem – one of the most popular tourist sites

Volatility in other parts of the Middle East has had a knock-on effect, argues Patrick Millar, marketing manager at Kirker Holidays. “While our business to many destinations in north Africa and the Middle East has declined in recent years, demand for tailor-made holidays to Israel has grown steadily, with most Kirker clients appreciating that Israel has a security infrastructure that is among the world’s most advanced.”

The Levantine nation’s draws are plain to see. The cradle of the world’s three major monotheistic religions (Judaism, Christianity and Islam) has an undeniably absorbing political landscape, hosts some of the world’s most fabled sites (the Dead Sea and the Dome of the Rock, to name just two) and is home to one of the world’s oldest continuously inhabited cities. “This really is a trip for travellers who are very much curious and wanting to learn,” notes Garrity. “People who want to go beyond the news headlines. Historically and spiritually Israel has such great importance. [Having said that] this trip is not necessarily for people who are looking for religious tourism.”

It’s a destination that can throw up lots of surprises, she adds. “People expect it to be incredibly conservative, and don’t get me wrong, it is in some areas, but it’s actually a really forward-thinking country. Tel Aviv in particular is very progressive.”

It’s less than a six-hour flight to Israel from London, and once there, the great diversity in such a small area also impresses the operator’s clients, Russell notes. “From the Sea of Galilee to the Negev desert you could be in two completely different countries. It’s four hours between them by coach, and that’s the longest transfer on our itinerary. It really is easy to travel there, especially if you’re on an escorted tour.”

I found it so refreshing to read an article that doesn’t dwell on the security situation or the Israeli-Arab conflict. The writer is obviously very enthusiastic about Israel and enjoyed her visit. It does me good to see Israel through an outsider’s eyes – and such a positive outlook at that!

Which all brings me to my final item – if Israel is enjoying such an influx of visitors, where are they going to stay? Well, finally, after only 140-odd years, they can stay in a hotel in Petach Tikva! Yes! My hometown is finally getting its very own hotel – and not a Fawlty Towers-type dump, but a proper high-class establishment! The link is in Hebrew only, so I’ll provide a rough translation and summary:

“We are the father of hotels in the Mother of Moshavot” says Etan Yariv, the manager of the new Prima Link Hotel in Petach Tikva. The last preparations are taking place and then it’s happening. 138 years after Yoel Moshe Salomon and friends established the first Moshava (agricultural settlement) in Israel, there will finally be a big modern hotel in the city.

This week we had a tour of the new hotel, which includes 120 luxurious rooms on 8 floors (the remaining floors will be offices)… the hotel will also have functions rooms and a synagogue. It’s target guests are foreign businessmen visiting the nearby Petach Tikva industrial and hi-tech zone; people from out of town making use of local medical services (the hotel is opposite the Beilinson Medical Center and Schneider Children’s Hospital), and you’d be amazed – also local PT residents are a target audience. Yariv tells us that there is already a lot of interest, especially from the local Neve Gan neighbourhood, regarding holding Shabbat Chatan events, Bar Mitzvahs etc. in the hotel, including accommodating families and guests.

What can I say besides “About time!!” Well, a hearty Mazal Tov wouldn’t go amiss, and so I wish the new owners the greatest success, and maybe, finally, Petach Tikva will be on the map!  This hotel will certainly prove useful when we have family celebrations!

With these happy thoughts, I wish you all Chodesh Tov and Shabbat Shalom!