How children are treated in the Middle East: compare and contrast

In recent days there were some wonderful stories and some horrific stories concerning children, emanating from the Middle East.

The bad news first: A suicide bomber blew himself up in the midst of a wedding party in Gazientep, Turkey, killing over 50 people. Not only were the majority of the victims children under 14, but possibly the worst part of this was that the bomber was just a child himself:

ISTANBUL—Turkey’s president blamed Islamic State for turning a youth into a human bomb at a crowded outdoor wedding party in southeast Turkey’s largest city, killing at least 51 people in a weekend attack that underscored how the war in neighboring Syria is destabilizing the region. 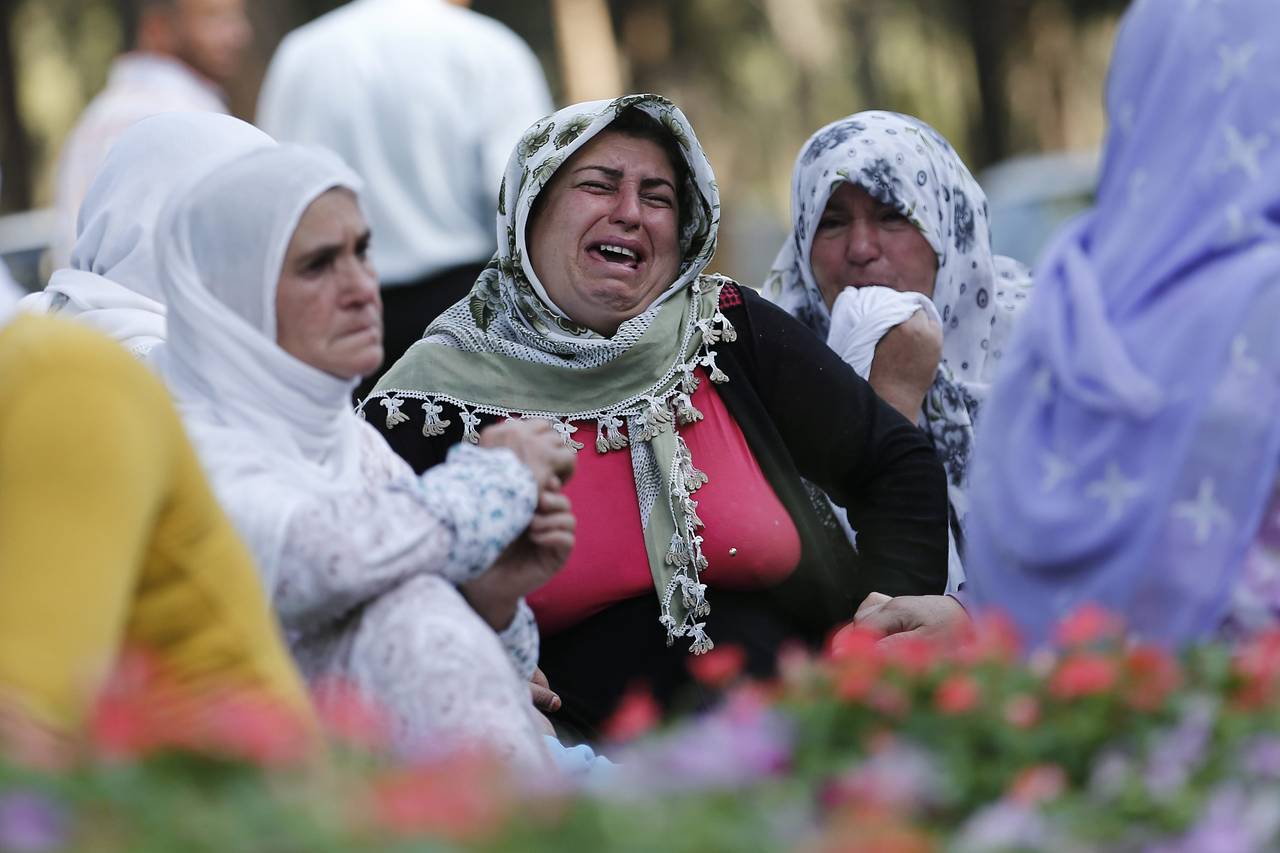 The bombing in Gaziantep targeted a largely Kurdish neighborhood and turned a celebratory summer evening into a scene of anguish and mourning, as the couple recovered on Sunday from injuries sustained in the massive Saturday blast and investigators worked to identify the charred body parts of guests and family members.

Dozens of funerals took place on Sunday, including ceremonies for 29 children who forensics teams had managed to identify. Nearly 100 people, including many women and children, were wounded in the attack.

It is unclear how the attacker penetrated the event. President Erdogan also said it was unclear whether the suspected young bomber triggered the explosives on his own, or whether they were detonated remotely. The local prosecutor’s office said it had recovered fragments from a possible suicide vest, and in a statement said that more information would be released about the identity of the attacker in due time.

A similar attack by a child bomber was thankfully thwarted at the last minute, this time in Iraq:

On Sunday, a would-be child bomber was captured by security guards in Kirkuk — a city in northern Iraq with a large Kurdish population. Broadcaster Kurdistan 24 aired footage of guards apprehending the teen and stripping him of his suicide vest before he could strike.

Najmaldin Karim, the governor of Kirkuk province, told CNN that the thwarted bomber was a 15-year-old who arrived from Mosul — the largest city under ISIS control — a week earlier. Following an earlier suicide attack in the city Sunday, the guards noticed something odd about the teen and stopped him before he struck his target, a Shia mosque.

“He is trained and brainwashed,” Karim told CNN.

“They tell them if they do this, they will go to heaven and have a good time and get everything that they ever wanted.”

Mia Bloom, a Georgia State University professor who is an expert on child soldiers and terrorism, said ISIS made wide use of children in conflict, typically employing them as bombers or snipers, either attached to adult fighting units or operating on their own.

The organization has eulogized more than 250 child attackers on its channels on Telegram, an encrypted messaging app the terror group widely uses.

ISIS has lured children “through a variety of tricks and treats, the way pedophiles lure in young kids,” she said.

But often — if child soldiers are internally displaced persons, as the thwarted Kirkuk bomber was reported to be, or otherwise vulnerable — they may feel “that they had no choice but to join … perhaps in exchange for food or protection or not upsetting the authorities in Raqqa or in Mosul.”

Child bombers who are coerced often deliberately fail to launch their attacks, as the teen in Kirkuk may have done, she said.

These stories are chillingly reminiscent of the child suicide bomber who was thwarted, or rather who changed his mind, at the IDF checkpoint near Shechem in 2004:

There is one shining light of humanity in the Middle East, and that of course is Israel. Compare the way those poor children have been weaponised – literally – by their handlers, to kill themselves along with as many civilians as possible, either by brain-washing or threats against themselves or their families, with the lengths to which Israel goes in order to save the lives of children from all over the world, even from enemy countries.

Last week we learned about an unlikely Facebook friendship that led to Afghan boy treated for heart disease:

A baby boy born in Afghanistan with multiple heart defects received life-saving surgery in Israel thanks to a Facebook friendship and a covert operation that traversed enemy borders and diplomatic lines.

Yehia was born to Afghani parents in Peshawar, Pakistan, with major heart defects, The New York Times reported. His parents had no way of paying for the surgery needed to save his life. 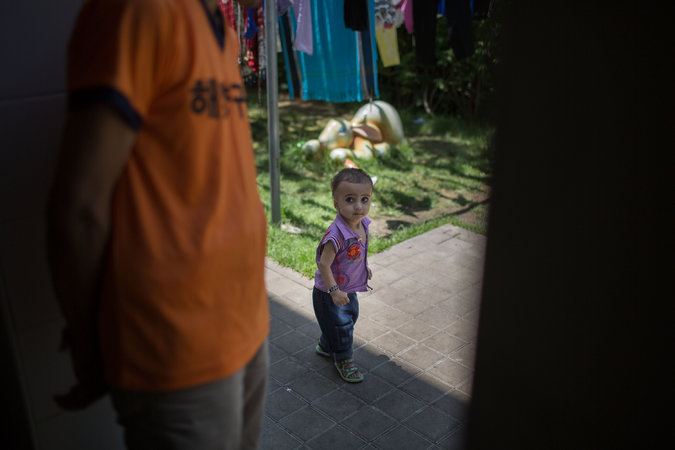 ehia in the days before his surgery. Credit Uriel Sinai for The New York Times

During a trip to their homeland they spoke with an English-speaking relative, Farhad Zaheer, living in the eastern Afghan city of Jalalabad, who reached out on social media to his contacts. Anna Mussman, 69, a daughter of Holocaust survivors living in Israel, answered his call. According to the Times report, Zaheer remembered Mussman because she had commented kindly on his previous posts.

Mussman contacted Simon Fisher, executive director of the Israeli charity Save a Child’s Heart. “I realize helping a child from a country which Israel has no diplomatic relations is not easy, but perhaps possible,” she emailed him. “Thanks so much and Shabbat Shalom.”

It was not simple to arrange, and involved calling in all sorts of favors and using many different contacts, but ultimately Yehia was brought to Holon’s Wolfson Medical Center, and was operated on in an eight-hour surgery.

Yehia’s family members did not want to give their last name out of fear of reprisals for having sought treatment in Israel. Yehia is the first Afghan to have been treated by Save a Child’s Heart, joining children from over 50 other countries who have been saved by the organization.

I note in passing that the NYT article linked here couldn’t resist taking a swipe at Israel and quoting Palestinian activists who accuse Israel of “medicine-washing”, i.e. using its humanitarian work to “cover up the crimes of the occupation”. Well, if that’s how they feel they are welcome to boycott the benefits of this wonderful organization. As the ToI article explains:

Save a Child’s Heart, whose $3.5 million annual budget is covered mostly by private Jewish donors, has saved the lives of over 4,000 children. Half of the patients come from Gaza and the Palestinian Authority. It has also saved hundreds of lives in, among other countries, Nigeria, Zanzibar and Tanzania, China, Iraq and Ethiopia.

And now, the most wonderful story that has been in the news for some time now reached a happy conclusion last week: A wounded Syrian girl who had been brought to Israel for treatment was discovered to have cancer too, and she has now been successfully cured of that too:

She was one of the 140 Syrian civilians – men, women and children – that Rambam doctors, nurses and other personnel have treated over the past three years of civil war there. However, the departure of “B” was especially emotional for everyone. Wearing a white dress and shoes and a little silver crown, “B” was the guest of honor at a farewell party held by an entire department, where Jews, Muslims, Christians, and Druse stood together with tears in their eyes, hugging her and worrying about the future that awaits her.

The girl arrived at Rambam’s Ruth Rappaport Children’s Hospital in early February as a small, scared, and wounded child. Once she recovered from the injuries that brought her across the border to Israel, the medical team noted from her blood tests that she suffered from a blood disease that was due to poor bone marrow function.

For Israeli children with this disease, the treatment is straightforward and generally yields good results: A bone marrow donor is found, the child is isolated from infection, the bone marrow transplant is performed and, if all goes well, the child recovers.

However, for a Syrian child, the entire process is much more complicated.

At this point, the Israeli government stepped in to help “B”’s medical team, led by Dr. Irena Zeidman and Dr.

Ayelet Ben-Barak. They managed to reach the child’s relatives in Syria and bring back blood samples from several family members to find out if they were potential donors.

“I’ll never forget when they first brought in those test tubes, discreetly wrapped in dish towels,” recalls Iris Porat, one of the nurses who cared for “B” throughout her hospitalization.

With the help of the government, “B”’s brother crossed the border from Syria and was brought to Rambam.

It wasn’t easy for the mother and daughter, who had arrived from what is still considered an enemy country, to spend more than six months completely cut off from their family. Grace Yaakov, a social worker in the pediatric oncology department, worked tirelessly to create a support system for the two. Non-profits from the Arab sector, as well as parents of Jewish and Arab patients, all, did their part to support “B,” who sometimes spent weeks in isolation.

They showered her with clothing, home-cooked food, books, movies, and games, anything to help the two feel more at home.

The girl captured everyone’s hearts with her clever, happy, and curious personality. She especially enjoyed the holiday celebrations and even dressed up in costume for Purim. She also lost no opportunity to share how much she missed her siblings and the spring near her small village, somewhere in the battle zone in Syria. Yesterday, “B’”s hospitalization came to an end.

The happy, smiling girl – who said she dreams of one day becoming a fashion designer – entered a room with tables of cakes and gifts, the sound of clapping and the drumming of traditional Arab darbuka drums. A slide show of photos from “B”’s time at Rambam was shown, and Ashwak El-rabia, an Arab nonprofit that assists children with cancer, gave her a tablet in which she could store her memories and a backpack for her first year of school.

After all the parting messages, some of which were painstakingly read in Arabic by Jewish doctors and nurses, the mother asked to read her own thank you wishes. In a small voice, she said: “I would lie if I said that I expected the kind of humanity I discovered here. I am grateful for your care and sensitivity; may God protect you. And we will always remember what you did for us.”

Just watch this heart-warming video for a cure from the nasty stuff at the beginning of this post:

I admit I have tears in my eyes as I read these two feel-good stories. The lengths to which our country – the army, the government, medical staff, social workers and civilian volunteers – is almost beyond belief. I doubt there is any country in the world which makes such gigantic efforts to save lives, even those of its enemies.

May all our efforts help to bring about peace speedily in our days.

And as a good friend of mine constantly reminds me: “Another reason why I’m so proud of our crazy little country”.

3 Responses to How children are treated in the Middle East: compare and contrast